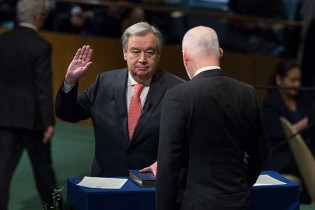 By António Guterres
The Charter of the United Nations has been a constant presence in my life. My awareness of it started with the usual brief introduction to the basics of the United Nations as an organization that many young people receive in school. Later, as my political awareness took shape against the backdrop of military rule in Portugal and my country’s status as a colonial power, the Charter’s calls for self-determination and other freedoms registered with urgency. During the time I spent as a volunteer in the poor neighbourhoods of Lisbon, the Charter’s vision of social justice was equally resonant. In subsequent service as a parliamentarian and then as Prime Minister, I was privileged to have an opportunity to advance not only national progress but one of the Charter’s other main objectives: international cooperation. Across a decade as High Commissioner for Refugees and now in my current role, the Charter’s power inspires me onward every day in serving “we the peoples”, including the most vulnerable members of the human family, who have a special claim on that landmark document’s provisions and protections.

By António Guterres
First August. It is the middle of summer in the northern hemisphere. We are witnessing not only record global warming but global political tensions are also heating up.

By António Guterres
I see five issues that will be central to implementing the Paris Agreement on climate change and achieving the 2030 Agenda for Sustainable Development. South-South Cooperation can offer solutions to all of them. First, rising inequality both between and within countries is eroding trust and deepening a sense of injustice. Globalization has enabled many people to escape poverty – but its benefits are not shared equitably and its costs fall disproportionately on the poor and vulnerable.

By António Guterres
In our world of plenty, one person in nine does not have enough to eat.  About 820 million people still suffer from hunger.

By António Guterres
This Forum on China-Africa Cooperation is an embodiment of two major priorities of the United Nations: to pursue fair globalization and to promote development that leaves no one behind in the context of a rules-based system of international relations supported by strong multilateral institutions.

By António Guterres
I thank the Russian Federation Presidency for convening this debate at a crucial juncture for the people of the Middle East and North Africa. The region faces profound divisions, troubling currents and a tragic shredding of its diverse religious, ethnic and cultural fabric.

By António Guterres
The situation in the Middle East is in chaos — to such an extent it has become a threat to international peace and security. The region is facing a true Gordian knot – different fault lines crossing each other and creating a highly volatile situation with risks of escalation, fragmentation and division as far as the eye can see with profound regional and global ramifications.

By António Guterres
Thank you all for being here today to show your solidarity with the women, men, girls and boys of Yemen. And I want to thank my co-chairs, the Governments of Sweden and Switzerland, for hosting this conference for the second year and for their continued humanitarian commitment.

By António Guterres
As this is the first time I have the opportunity to address a UN body after the Security Council resolution of last Saturday on Syria, allow me please to say a few words in that regard.

Renewed Partnership to End Hunger in Africa by 2025

By António Guterres
After a period of prolonged decline, world hunger is on the rise. Africa has the highest rates of hunger in the world, and they are increasing. Agricultural and livestock productivity in Africa is under threat. This is largely due to conflict and climate change.

By António Guterres
I am very pleased to present this report, “Making Migration Work For All”, which serves as my principal input to the zero draft of the “Global Compact for Safe, Orderly and Regular Migration.”

By António Guterres
Every woman and every girl has the right to a life free of violence. Yet this rupture of human rights occurs in a variety of ways in every community. It particularly affects those who are most marginalized and most vulnerable.

By António Guterres
It is fitting that this year’s conference of parties (on climate change, COP 23) is led by Fiji, a nation on the frontlines. Last month I visited other small islands facing the impacts of a warming world: Antigua and Barbuda and Dominica. The hurricane damage was beyond belief. The catastrophic effects of climate change are upon us. Floods, fires, extreme storms and drought are growing in intensity and frequency.

By António Guterres
When we discuss global interconnection in relation to energy, we are at the centre of the two key words that express our global concerns - sustainability and inclusivity.

By António Guterres
I will travel to the Central African Republic early next week to spend United Nations Day with a peacekeeping operation in order to pay tribute to peacekeepers across the world.

By António Guterres
As you know, we are coming off a jam-packed High-level week and opening of the General Assembly. Some of the most important speeches during that period came from leaders of Caribbean nations reeling from back-to-back hurricanes.

“We are a World in Pieces”

By António Guterres
I am here in a spirit of gratitude and humility for the trust you have placed in me to serve the world’s peoples. “We the peoples”, and our United Nations, face grave challenges. Our world is in trouble. People are hurting and angry. They see insecurity rising, inequality growing, conflict spreading and climate changing.

By António Guterres
Twenty years ago, when I was starting my functions as Prime Minister of Portugal, the world was surfing a wave of optimism. The Cold War had ended, technological prosperity was in full swing, the internet was spreading and there was the idea that globalisation would not only increase global wealth, but that it would trickle down and would benefit everybody in our planet.

By António Guterres
Allow me first of all to express my deep gratitude to all the colleagues that have worked hard – in the Secretariat, in the Agencies, Funds and Programmes – to allow for this report to be ready on time. And to the leader of the team – the Deputy Secretary-General, Amina Mohammed – who has been not only the inspiration, but also the centre of management and strength to make things happen, and to make things happen with the required ambition and with the required detail.
Next Page »
ADVERTISEMENT ADVERTISEMENT