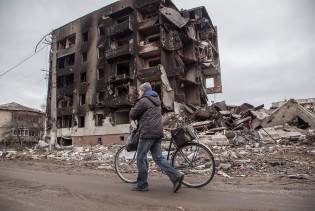 By Ed Holt
“I never, ever, believed that anything like this could happen,” says Valia*. “Not for a second.” Just two weeks ago, the English teacher says, she had been living a normal life in Kropyvnytskyi in central Ukraine with her 13-year-old son. But on February 24, she woke up to the news that Russia had invaded her country.

By Ed Holt
When hundreds of elephants died in the space of a few months in Botswana earlier this year, conservationists were shocked. Wildlife experts said it was one of the largest elephant mortality events in history.
Next Page »
ADVERTISEMENT ADVERTISEMENT