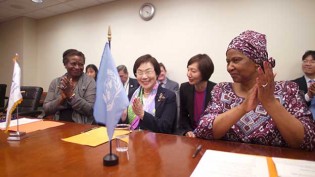 By Hawon Jung
A strong movement of feminism is sweeping South Korea. While women feel empowered to stand their ground, the men are retaliating. When South Korean archer An San won two gold medals in just two days during the recent Tokyo Olympics, the response the 20-year-old received at home was a mixed. Some men were angered and said her medals should be taken away. Why? Because her short hair was a sign that she was a ‘man-hating’ feminist.
ADVERTISEMENT ADVERTISEMENT