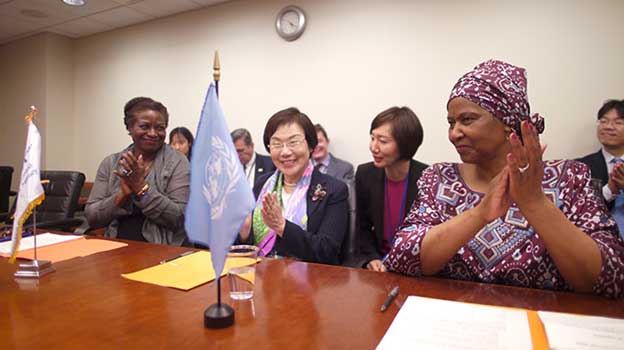 UNFPA Executive Director Dr. Natalia Kanem, KOICA President Lee Mikyung and UN Women Executive Director Phumzile Mlambo-Ngcuka (from left) launched a partnership in 2018 that Ms. Lee characterized as “a key foundation and platform for solidarity and collective engagement for gender equality.” The new tripartite agreement-- between UNFPA, the Korea International Cooperation Agency (KOICA) and UN Women—has combined the strengths of the three partners to improve the lives of women and girls and accelerate the achievement of gender equality, as expressed in Sustainable Development Goal (SDG) 5. Credit: UNFPA/Tara Milutis

SEOUL, South Korea, Sep 1 2021 (IPS) - A strong movement of feminism is sweeping South Korea. While women feel empowered to stand their ground, the men are retaliating.

When South Korean archer An San won two gold medals in just two days during the recent Tokyo Olympics, the response the 20-year-old received at home was a mixed. Some men were angered and said her medals should be taken away. Why? Because her short hair was a sign that she was a ‘man-hating’ feminist.

As bizarre and surreal as it may sound, the attack on An is a bleak reminder of the deep-rooted gender stereotypes in the economically advanced, yet deeply sexist South Korea – and the enormous pressure on women and girls to look and act ‘feminine’. It’s also another episode of the escalating culture war between the country’s increasingly outspoken feminists – and antifeminists seeking to silence their voices.

Lowest in the ranks

South Korea is the world’s 10th largest economy, a tech giant that is home to Samsung, the world’s largest smartphone maker, and a cultural powerhouse whose K-pop stars like BTS enjoy global followings. But despite all the economic and technological advances, the deep-seated patriarchy and gender discrimination remained little changed.

South Korea is ranked at the 102nd in the world in terms of gender parity, according to the World Economic Forum. The gender pay gap in the country is the widest among the advanced economies of the OECD member nations.

It has consistently ranked as the worst place to be a working woman in the Economist magazine’s Glass Ceiling Index. Women account for 19 per cent of parliamentary seats, almost on par with North Korea.

Women are under enormous pressure to look perfect at all times and all costs – as shown in the country’s reputation as the world’s capital of plastic surgery. On the busy streets of Seoul, it’s not difficult to find plastic surgery adverts screaming ‘being pretty is everything!’ and rail-thin K-pop starlets presented as role models for teenage girls and young women. The stars’ extreme diet regimens are widely shared on social media and avidly followed by many.

Typical beauty ideals in South Korea for women include pale yet glowing skin, a youthful ‘babyface’, long and luminous hair, wide eyes, a thin nose, and pin-thin body (nearly 17 per cent of South Korean women in their 20s are underweight, compared to less than 5 per cent for their male counterparts, according to a study in 2019).

The pressure begins early: more than 40 per cent of female elementary school students wear makeup, and the number goes up to over 70 per cent for middle schoolers.

But women started to fight back. A powerful wave of feminist movement has taken the country by storm in recent years, allowing many women to speak up against sexual discrimination, assault, and objectification like never before.

Since 2018, women have rallied together to bring down many sexual predators, including a popular presidential contender, in one of the most successful cases of #MeToo in Asia.

They successfully campaigned to end the abortion ban. The so-called ‘Escape the Corset’ movement was part of that awakening, meant to defy the pressure to follow the rigid beauty ideals.

Women and girls who joined the campaign cut their hair short, destroyed their makeup, refused to wear tight, revealing, or uncomfortable clothes to instead opt for something more comfortable and practical. Since then, short hair has become something of a political statement among many young feminists.

The wave of awakening, however, has also drawn a strong pushback by men who thought – like many around the world – that the women had gone too far, and many labelled feminists as ‘man haters’ who should be punished.

More than 40 per cent of female elementary school students wear makeup, and the number goes up to over 70 per cent for middle schoolers.

The backlash has reached a fever pitch since May when members of many online forums popular among men started to cry ‘misandry’ over a adds that use an image of a pinching finger, a universal gesture to indicate something small.

In a campaign likened by many as a McCarthyian witch-hunt, they claimed whoever created the image must be feminists and out to ridicule the size of their genitals. Despite having no possibility of any political plot, many of the accused companies and government institutions – including the national police agency and the defense ministry – bent down quickly, apologized for hurting the men’s feelings and removed the images from their posters.

These online mobs even enjoyed political backing; Lee Jun-Seok, a young member of the rightwing People’s Power Party, rose to prominence by amplifying the conspiracy theory over the ‘misandrist’ finger gesture, and eventually became the leader of the party in July.

Feeling supported by a powerful politician and emboldened by groveling apologies from companies and the government, the online mobs moved on to their next target—the star Olympian whose appearance didn’t fit into their ideal of traditional femininity.

‘Why did you cut your hair?’ An was asked on her social media, to which she replied, ‘’coz it’s convenient’. The answer was not enough.

A campaign to extract an apology from An for being a feminist began, with some even demanding that the Korea Archery Association take away the gold medals from the ‘man hater’.

But women fought back again. Lawmakers, activists, entertainers, and thousands of ordinary women rallied behind An, many sharing the photos of their short hair on social media as a show of support.

And as the cyber-bullying targeting An raged on, many women across the country watched as An won yet another gold – becoming the first archer in Olympic history to win three golds at a single Game.

Hawon Jung is a journalist and former Seoul correspondent for the AFP news agency. She is the author of ‘Flowers of Fire,’ a book about South Korea’s #MeToo campaign.

Source: International Politics and Society (IPS), published by the Global and European Policy Unit of the Friedrich-Ebert-Stiftung, Hiroshimastrasse 28, D-10785 Berlin.