SOUTH AMERICA: Young People Want to Give Farming a Chance

RIO DE JANEIRO, Nov 27 2008 (IPS) - Unlike so many in their grandparents’ generation, today’s young farmers in South America’s Mercosur trade bloc say they want to live off the land where they were born, and not move to cities where there is no longer a place for them. 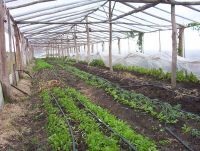 But they are asking for public policies that will guarantee their livelihood. Without such support, attaining their dreams will be an uphill struggle.

Nelson Villar is a small farmer from Los Choapinos, in the O’Higgins Region in central Chile. At only 21, he is making the most of every inch of the half hectare he owns, and the other two he occasionally leases, where he grows cherries and raspberries.

But in this area, where not long ago there were 12 families with an average of five hectares apiece making a living from what they grew, just like he does, now there are only two.

"The city is moving to the countryside," Villar complains, referring to the two export-oriented companies that have moved into the area, after buying out small farmers, thus intensifying the process of land concentration in Los Choapinos.

Villar is one of 39 participants in a Training Course for Young Farmers, organised as part of the Tenth Specialised Meeting on Family Agriculture (REAF), held by Mercosur (Southern Common Market – made up of Argentina, Brazil, Paraguay and Uruguay, with Chile as one of the associate members) on Nov. 22-27 in Rio de Janeiro.

The meeting was made possible by a grant from the International Fund for Agricultural Development (IFAD), as part of its sponsorship of the bloc’s efforts to promote dialogue between small-scale producers and governments in support of family farming.

Twenty-five year old Janet Salazar and her family grow garden produce on a five-hectare lot in the province of Jujuy, in northwest Argentina. Like Villar, Salazar wants to stay in the countryside, on the land she learned to love as she played when she was a little girl.

The Rio de Janeiro workshop is a chance for the young farmers to share experiences with each other and with organisations and authorities of the countries that make up Mercosur.

The aim, according to the organisers, is to build a rural youth agenda for the development of public policies to address their needs, Alvaro Ramos, Regional Coordinator of the IFAD-Mercosur Programme, explained to IPS.

The course includes modules on practical subjects, such as access to technology and marketing techniques, and others that deal with more analytical issues, such as the increasing amount of land in foreign hands.

Why begin with young people? The answer can be found in the statistics. According to one of the course instructors, Luis Caputo, more than 50 percent of Latin America’s rural workers are young people under the age of 30.

But more importantly, there are strategic reasons for focusing on the younger generations, Ramos said. There is a growing belief in the region that family farming policies cannot be limited to addressing short-term problems or deploying compensatory strategies; they must be an integral part of the economic model, he said.

The IFAD official said that young farmers are "agents of innovation" and "social actors" capable of reproducing new models that will strengthen that system of production.

Ramos said the prevailing model, which does not put a priority on family agriculture, forces large numbers of people to move to the cities "in search of work and a better life."

"We need to turn this situation around, implementing changes in rural areas by adopting long-term measures that will bring about the social inclusion of young people in the countryside," he added.

"We don’t want young people to think about policies that only deal with the problems of rural youths, but also with issues such as gender, access to land and agrarian reform, agricultural insurance and trade facilitation," said Favio Pirone, one of the course coordinators.

According to information presented at the REAF, family farmers account for approximately 80 percent of Mercosur’s rural population. This sector of the population produces 60 percent of the food consumed in the region.

For the conference’s organisers, it is a key sector that must be taken into account in the definition of food security strategies in South America.

"We’re waking up," exclaims Gabriela Zarate, a 20-year-old Paraguayan woman who is working to mobilise other young people in her region.

Her neighbours "don’t believe in anything anymore," she says. "They’ve lost hope because, even if they want to stay on the land, they don’t have any assistance to cultivate it, or to obtain technical training or loans."

Zarate, who also studies law and plans to apply her legal training in the future to solve problems in rural areas, is outraged by a remark from an acquaintance who said she decided to go to law school because she did not want to be a peasant like her father.

"I love the land just as much as my dad does. He was the one who taught me to appreciate it," stressed Zarate, who works with her family on a two-hectare farm where they grow melons and tomatoes to sell in the market, and other crops, such as cassava and corn, for their own consumption.

The three young farmers listed a number of demands made by their generation, many of which are shared with their parents’ generation: greater availability of credit, assistance to purchase fertilisers (which they say are very costly), trade policies, and courses, schools and universities in rural areas.

They also demand more land, technology suitable to the needs of small-scale farmers, decent housing, and the regularisation of land titles and leases.

Salazar summed up their demands: "What we need is a plan to keep young people firmly rooted in the countryside."

"When our grandparents migrated to urban areas, they could still find opportunities there," because "industries were being developed," she explained.

Now, however, "many young people that were forced to leave the countryside for the city are coming back indignant and frustrated because there are no jobs for them there and because they’re singled out and marginalised for being peasant farmers, even though they produce the raw materials that supply the cities."

"They end up realising that they want to go back to where they belong," she concluded.

And it is there that these young people want to stay, and not be forced to leave.