CLIMATE CHANGE: The Day After Tomorrow Might Have Been Yesterday

WASHINGTON, Feb 12 2010 (IPS) - When the 2004 film “The Day After Tomorrow” depicted the northern United States buried under tens of feet of snow following an abrupt change in global climate patterns, it cemented the association in the public consciousness between climate change and extreme weather events. 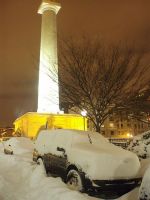 The photographer's truck, buried outside the Washington Monument. Credit: Eastenhuh/flickr

While the three feet or so of snowfall in Washington and throughout the mid-Atlantic U.S. coast this past week was a far cry from the tidal waves and walls of ice that haunted Jake Gyllenhaal and Dennis Quaid in the science-fiction thriller, it has nonetheless been an exceptional event – and one that has ground the capital to an extended standstill.

As Washingtonians finally dug themselves out Friday to brave clogged metro trains and icy roads on the way to the office, one of the lasting impacts of the past week is the discussions it has provoked about how climate change has impacted the current weather – and how this weather might impact the ongoing debate here over how the U.S. government should address the threat of climate change.

Dubbed the “snowpocalypse” – or sometimes “snowpocalypse II” in deference to the previous storm that blanketed Washington in December – the scenes on the streets this past week have actually seemed eerily post-apocalyptic. Silent, monochrome and empty, they have, for some, forebode a world in which no action is taken to stem the effects of climate change.

Others, though, see the wintry landscape as undermining the direness – or even the reality – of the threat posed by climate change, which they prefer to refer to as global warming, thus underscoring what they see as the incongruences between the phenomenon and the snowy spell.

On Wednesday, for example, climate change denier Sen. James Inhofe told The New York Times that the recent weather furthered doubts over whether climate change is “unequivocal” or a human-made phenomenon.

Fox News commentators likewise raised throughout the week what they felt was the “inconvenient” connection between the blizzard and the theory of global warming.

If anything, though, the weather should help discredit climate change deniers, contend major climate scientists and activists.

“Record snow is not in any way, shape, or form evidence against climate science and in fact it is largely consistent with it,” Joseph Romm, a former Energy Department official in President Bill Clinton’s administration and the editor of the Centre for American Progress’s Climate Progress blog, said Thursday.

“I wouldn’t want to say global warming is the cause or the sole cause [of the snowstorms]…but we are in a warming trend,” he said. “It is absurd when we are in an overall warming trend that a snowstorm is evidence of a cooling trend. But the anti-science side – the ideologues – have been trying to push the idea that we’re in a cooling trend and that this is evidence of that.”

In fact, increased snowfall is entirely in line with climate projections, said Jeff Masters, a meteorologist with WeatherUnderground.com.

While the current storms are likely due to “natural variability” – the “jet stream this year [happened to] set up in a path that includes these cities” on the eastern U.S. seaboard, he explained – they are nonetheless historically “extraordinary” and it is reasonable to expect global warming to bring more such storms in the future.

In Washington, this “intense precipitation” – by regional standards – has shut down much of the federal government since Feb. 5. All votes in the House of Representatives were suspended for the week and the Senate only returned to business Thursday. Any number of events have been cancelled – from think tank discussions to concerts.

Washington-area schools were given “snow days” that lasted at least through Thursday and non-essential federal government employees were granted an excused leave up through Friday morning.

The virtual shut-down of the federal government cost the government about 100 million dollars per day in lost productivity, according to the Office of Personnel Management, which decides whether or not government employees will be required to come in to work.

Reports say at least 20 deaths in the mid-Atlantic region have been attributed to the storm and 4,000 homes were without power late Thursday night. Cars had swerved and gotten stuck in snow banks, post went undelivered, trash uncollected, grocery stores’ shelves had been pillaged and their queues evoked numerous references to Soviet-era breadlines in local newspapers.

Somewhere between the 30 or so inches Saturday and the 10 more Wednesday night, this winter officially became the worst the U.S. capital has seen since precipitation has been recorded, with a tally of 55.6 inches of snow so far this season – a number due to increase when another flurry hits Monday.

These storms have also added another pinch of contentiousness to the climate change debate – one of the many political tempests that have haunted the city since the summer.

Perception, some fear, may be especially affected by the fact that debate over a phenomenon called “global warming” is taking place in a winter wonderland. It is possible, for instance, that the wintry weather may buoy the arguments of climate change deniers and lead to less willingness by the public to take decisive action on the issue – especially action that may be expensive or inconvenient.

Masters admits it could be a problem. “That’s a difficult thing. And that’s why we’re here [talking to reporters], we’re here to change perception and present the science,” he said.

But snowstorms will not be the only storms in a changed climate. A study in the Jan. 22 issue of the journal Science projected that while the overall number of hurricanes will decrease over the next 80 years, Category 4 and 5 hurricanes – those with sustained winds of 131 miles per hour and above – will nearly double in frequency. The most intense of these will more than triple in frequency.

Previous studies have also pointed to a pattern of fewer but more intense storms as ocean temperatures rise over the next century.

“We’re not in a deep freeze. According to satellite records, this is the warmest winter on record,” Romm said Thursday. “No individual weather event can be directly ascribed to global warming, but global warming loads the dice, makes extreme events more likely.”

“We still have winter,” he added.