LALGARH, West Bengal, India, May 13 2010 (IPS) - Almost a year on, Dipali Sahu still recalls with horror the day an operation by the policemen and paramilitary troopers began here in June last year to take back control of the vast swathes of eastern India captured by the Maoist rebels. 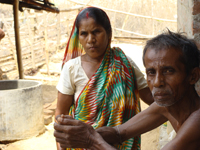 “They broke open the door, barged into our house looking for the rebels, and rained blows on us. I was hit in the head. I started bleeding and crying,” recalls the fifty-something woman from a village in Pirakata near Lalgarh, a cluster of villages in West Midnapore district of eastern state West Bengal.

Dipali’s husband, Niranjan, looking thin and very frail, was beaten up mercilessly too. Even their son-in-law was not spared.

Many were picked up as suspected Maoists and put behind bars for months as a long, drawn-out trial ensued.

“My brother was lying in a hut by the road. He was picked up by security troops for no reason. He spent months in jail, and after spending nearly 17,000 rupees (about 400 U.S. dollars) for legal expenses, we secured his release,” says Sujan Sahu, another villager.

Almost a year since the deadly anti-Maoist operation in Lalgarh, inhabited mainly by tribal people, the scars of the villagers caught between the rebels and the policemen refuse to heal.

As the Maoists periodically launch attacks on police across the country’s central and eastern regions, the innocent villagers become casualties of a debilitating war between the authorities and the rebels, believed to be hovering around 22,000 and living mostly in the forests, with their patrons tucked away in big cities.

While India’s economy has hurtled forward to emerge as the third largest in Asia and many of the fortunate millions lifted themselves out of destitution, regions like Lalgarh in West Bengal remain mired in poverty and chaos.

Impoverished village folk – in Lalgarh and elsewhere in the south Asian country – gripe that both the democratically elected communist government, which has ruled the West Bengal state for 33 years, as well as the various administrations that have held the reins of power in New Delhi have neglected them. Many say this has paved the way for the ultra-left rebels to set up bases in the rural regions and adjoining forests.

The Maoist movement began in the late 1960s in a northern town of West Bengal state called Naxalbari, from which ‘Naxalites’ or ‘Naxals’, as the rebels are also known, is derived. It subsided in the early 1970s only to resurface as a more violent force that now operates under the Communist Party of India (Maoist).

Lalgarh became a symbol of the growing Maoist expansion in a majority of the 28 Indian states as they captured the police station and adjoining areas in early 2009.

In June last year, the police regained control of Lalgarh, which is about 170 kilometres west of Kolkata, West Bengal’s capital, as they launched a massive offensive. Reports of human rights violations poured in from Lalgarh following the operation.

While the situation in Lalgarh appears to have normalised, its residents still anguish over their plight. All development activities have come to a halt and water scarcity roils the parched villages.

“We don’t have water in the village. All wells have dried up and no deep tube well was sunk owing to the situation. It is a desert,” one villager complains.

“We have lost all business. I have a fertiliser shop, but there is no buyer now. I can only see starvation ahead,” says Gautam Mahish, 35, a small trader.

Jitman Gharai and his wife Kalpana bemoan their penury. “We live by making brooms. It is not enough and there is no government assistance or subsidised food grains. There is no power in the village, there is no kerosene,” they say. It has not helped that they have yet to receive the much-touted Below Poverty Level (BPL) cards for India’s poor.

Under the Indian government’s BPL scheme, only the very poor belonging to the vulnerable sections of society are entitled to the ration cards being distributed by the Food and Supplies Department at subsidised prices.

In Lalgarh not a single poor villager appears to posses such a card.

“We have not heard of such a card ever,” says Laxmi Mal, a 35-year-old resident of Hirakuli village in Lalgarh whose son had to run away from the troopers when the operation against the Maoists began.

“In West Bengal the tribal people have lost their faith in the communist government that hardly carried out any developmental work. The Maoists did them no good,” says Abhirup Sarkar, an economist with Kolkata’s Indian Statistical Institute.

“Yet in times of police atrocities or harassment, they are the only forces to which the villagers can turn perhaps. Such dependence nourishes the rebels.”

The police forces in Lalgarh, who now live in constant fear of attack, say no progress is possible in Lalgarh until the political process begins.

“Maoists still rule the region. All members of political parties have either fled their houses or are living in fear without any activity. Till the government restores the political process here, no progress is possible,” says an official in Lalgarh’s police station, where a huge iron gate is kept locked round the clock in anticipation of another attack by the rebels.

Such fear constantly hounds the rest of the villagers too.