LATIN AMERICA: Photos a Leveller for Maids and Their Employers

SANTIAGO, Jun 17 2010 (IPS) - Fifty pairs of women — maids and their employers — from Argentina, Chile and Colombia abandoned their daily routines to pose for photographs for a project about the hierarchical relationship that unites them. 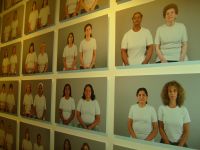 “We were both interested in the issue of domestic employment in the Latin American context, and over time we created this platform to show the points that these women have in common as they share the domestic environment in a hierarchical work relationship,” said Graham, who like Rumié has lived many years in Chile.

The artists used a variety of poses to portray each of the employer-employee pairs: seated, standing, facing forward, facing each other, or facing backwards. They found the women for the project through family members and friends in Santiago and Buenos Aires, and Bogotá and Cartagena in Colombia.

For the photos the employers and maids wore the same thing: a white shirt and no jewellery or decoration. With the images made under these “equalising” conditions, the artists leave it up to the viewer to guess — using one’s own cultural codes — which woman is which.

In total, 100 Argentine, Chilean and Colombian women, between ages 19 and 95, posed for Graham and Rumié and answered 15 items on a questionnaire, including the number of children they have, their wishes and fears, the age of their first menstruation and when they lost their virginity.

The exposition at the MAVI runs until Aug. 8. It has two walls with the photographs of the pairs portrayed facing forward and backwards, and three videos that show how the project unfolded in 2008 and 2009.

One of the videos shows the women posing in the photo sessions, and another shows some of the participants invited to a luncheon served by women university students.

The third uses graphics that group the women according to the characteristics they share, for example, those who have two children, those who fear being alone, and those who have lost a loved one.

“Each pair had a different relationship; some were much closer, lasting 30 years or more, and others knew each other just three or four months,” said Graham. But for all of the pairs, it was difficult to be photographed looking each other in the eyes, she said.

In Rumié’s view, “in some way, all Latin Americans who have experienced this (being cared for by a domestic employee) feel a debt to these women who have turned over part of their lives to the intimate chores of another family, often even giving up their own personal lives.”

The reality of the domestic employees who work “behind closed doors” in Chile was brilliantly portrayed in the 2009 film “La Nana” (The Maid), directed by Sebastián Silva and starring Catalina Saavedra. The film won several awards at U.S. festivals.

In Latin America, paid domestic employment is mostly carried out by women. The “nanas” — as they are known in Chile — total 14 million and represent 14 percent of all working women in the region.

In recent years, several Latin American countries — Chile, Guatemala, Paraguay and Uruguay — have established policies that improve working conditions for maids and nannies. But in general, this type of job lags behind other forms of work.

While some places domestic service is increasingly professionalised, there are still cases of near slavery and child labour, experts warn.

During the project, Rumié found that “fortunately there has been a change” in labour relations within the household in recent years, with greater respect for maids, who in turn are less submissive.

But more than highlighting the negatives and lack of job security that these women face, what interested the artists was to show how society tends to “stratify a person” based only on appearance, said Rumié.

“We are completely guided by our prejudices,” she said, and in the case of domestic employment, many of those ideas are holdovers from the Spanish colonial era.

“This project is not only a visual staging, but also an initiative that provided a symbolic experience for the women,” she added.

In November, some of the photographs were published in the magazine “Paula,” of La Tercera newspaper. The show is slated for exhibition in Washington in July 2011.