BRUSSELS, Jun 25 2010 (IPS) - With the world’s population predicted to reach 9 billion by mid-century, the notion that a form of agriculture aimed at producing more from less can put food in everyone’s mouth may appear Utopian. Olivier De Schutter, the United Nations’ special rapporteur on the right to food, begs to differ. The Belgian professor is a champion of agro-ecology, a science that stresses the need to work with nature, rather than to try and conquer and replace them with technology developed in laboratories. 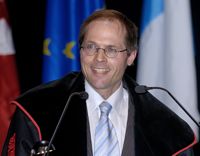 Using such techniques as water harvesting and crop rotation, agro-ecology generally eschews “external inputs” like imported pesticides. Not only is this approach far less damaging for the environment than the intensive model of agriculture that prevails today, it can be highly productive, according to its supporters. Their case has been bolstered by a major new study from Essex University in Britain, estimating that agro-ecology can bring us almost 80 percent more food than “conventional” farming.

Q: Do you seriously believe that agro-ecology has the potential to end global hunger? A: Agro-ecology does not mean simply not benefiting from modern technology. It means instead adopting the very best technology developed by farmers, producing locally the inputs they need to fertilise the soils and grow crops. All these techniques have been proven to increase yields very, very significantly.

The study covering 57 countries by Jules Pretty and his team in Essex University came to the conclusion that the average yield increase (through switching to agro-ecological approaches) was 79 percent. That is an incredible result, just by using the correct techniques.

Q: Food production has become increasingly concentrated in the hands of a small number of companies. What can be done to counter their growing power? A: It’s been the wrong approach to basically develop science in laboratories and then dump this science on the farmers without taking into account their views and real needs. We need to make public decision-making in this area much more transparent and democratic. Public decision-making should be much less influenced by corporate interests.

Q: Can there be any place for chemical fertilisers and genetically modified (GM) foods in the approach to agriculture that you are advocating? A: Fertilisers shouldn’t be demonised. Agro-ecology relies on locally produced inputs: organic fertilisers, manure. Sometimes it’s useful for one year, when you launch something, to use external inputs – phosphate, for example, to revitalise the soil. But the idea of agro-ecology is that it should then very soon become self-supportive.

GM crops is a very complicated issue. Agro-ecology is not focusing primarily on the plant, it focuses on the plant in its ecosystem, sees the plant as part of a much larger system. GM technology basically dissociates the plant from its environment.

GM foods mean a huge dependency for farmers on seeds that are protected by intellectual property rights that are in the hands of a small number of corporations. In fact, GM seed specifically is dominated by one single company: Monsanto. That creates a huge liability for farmers who are all too often falling in debt because they have to buy at too high a cost.

Q: Your predecessor as UN special rapporteur, Jean Ziegler, once said that when a child dies of hunger, he or she has been murdered. Do you agree with him? A: We agree on the substance. Three million children die every year from malnutrition and we have one child out of three in developing countries born to a mother who is suffering from anaemia, so it’s a very serious problem. When you look at any situation and you go up the chain of causes, you end up identifying one decision made by governments, which was the wrong one. There is always a need to move beyond the technical question ‘why is this person starving’ to the political question, how can this be?

My role is to climb up this chain of causes and ask “why, why, why?”

Q: Israel’s economic blockade of Gaza has caused malnutrition levels there to soar. Does the blockade violate the right to food? A: Absolutely. It’s evident that by not allowing the economic system to flourish, Israel is committing a very serious violation of the right to food, which is also the right to produce and to gain incomes. The farmers there have no inputs, they have no possibility to sell on markets; 80 percent of the population is without employment. This is destroying completely this community.

Q: The World Food Programme and other bodies have argued that the EU’s efforts to increase the use of biofuels have exacerbated global hunger. Yet the Union is refusing to change its policy on biofuels. How do you feel about that? A: A major impact of biofuels is increased land concentration and speculation on land which drives off indigenous peoples and small farmers from the land they need for their livelihoods but on which they don’t necessarily have a legally recognised status. In all the countries I’ve visited – and I’ve been in quite a few developing countries over the past couple of years – the complaints of farmers is always the same. They fear they are going to be evicted from their land.

The single most significant driving force behind this is biofuel production. The certification criteria which the European Commission presented recently (officially designed to make biofuels “sustainable”) do not take this into account.

One thing that is completely absent from the criteria presented by the European Commission is the impact it (biofuel production) is having on equality and inequality in rural areas. It is my conviction that in most cases, if not all cases, biofuel production will benefit those who are better off and not benefit the poorest. Instead, it will make the position of the poorest worse.