BHUBANESWAR, India, Dec 21 2010 (IPS) - Just two years ago, Ratha Majhi was at his wits’ end trying to eke out a decent living from his modest vegetable farm. 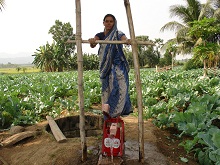 But since then he says his life has changed, adding with pride, "The farm is now my own patch of green paradise."

It’s all thanks to a simple and cheap micro-irrigation tool. Indeed, since 1994, the treadle pump has been changing the lives of millions of farmers in this country, where some 60 percent of the population are estimated to be directly involved in farming.

Made of iron, the treadle pump is similar in principle to a hand pump. But instead of the latter’s single barrel or cylinder and the use of hands to pump water, the treadle or pedal pump has two cylinders and uses foot power to lift water from underground.

"Most farmers in India are able to grow just the monsoon crop," says Amitabha Sadangi, the man behind this wonder pump. "If they have a reliable irrigation system throughout the year, they could, even on their small patch of land, grow up to three crops annually."

The treadle pump is, in fact, one of two micro-irrigation gadgets developed by the Sadangi’s Delhi-based International Development Enterprises, India (IDEI) specifically for marginal farmers who tend to crops that occupy less than a hectare.

The other is the drip irrigation tool that was designed for use in southern and western India, where the water table is usually found only below 30 metres.

The treadle pump, meanwhile, is suited to regions with high water tables, such as here in eastern India. To use it, one drops the attached pipe into a dug well, or a river or hill spring, and then starts pedaling. An hour’s pedaling can pump out as much as 5,000 litres of water. Two hours’ pedaling would be enough to irrigate half a hectare of dry season vegetables.

Sadangi, 51, comes from a poor family here in Orissa state. Knowing firsthand the hardships subsistence farmers in these parts go through while trying to keep their crops irrigated, he says he became interested in manually operated treadle pumps in Bangladesh. Pretty soon, he had adapted the technology to suit local requirements.

One nifty feature of IDEI’s treadle pump, for example, is that it is foldable. At 18 kilogrammes, it is also portable – a necessity for most small farmers who have non-contiguous farmland holdings.

Tapan Pattanayak, IDEI’s chief general manager for the firm’s eastern India operations, says that operating the pump is "so easy that even a child, (female) elders, and even disabled people" can do it "by manipulating the body weight on two foot pedals or treadles and by holding a bamboo or wooden frame for support".

"One may even sit and pedal," he says.

Nabin Amanatya, 35, can attest to the pump’s user- friendliness. Afflicted with polio, he struggled for years farming his family’s spit-sized plot that reached a mere tenth of a hectare. Then in 2006, he bought a treadle pump.

His neighbours teased him when they saw him trying to make a go with the pedals. But he was soon tending a thriving garden of cucumber, ridge gourd, and lady’s finger – vegetables that are very popular in the local market. Within two years, Amanatya had repaid his father’s loan and had switched to better seeds and fertilisers.

"Now my family eats fresh vegetables and household expenses are met out of the income from vegetable sales," he says. "I have plans to purchase a bicycle after constructing the house. I have also decided to get an electricity connection for our house."

Commercial irrigation equipment would costs much more. A diesel pump, for example, goes for at least 40,000 rupees (880 dollars). And then there would be the recurring diesel expenses.

Says Sadangi: "Affordability is crucial. Marginalised farmers cannot invest much more than their labour. We keep the cost and maintenance as low as possible."

But Pattanayak admits that some farmers are still finding the treadle pump and the drip irrigation beyond their means.

"With bankers’ loan ticket size not less than 10,000 rupees, farmers are facing difficulty getting loans to buy these equipment," he says. "Steel prices, too, have trebled the original treadle pump’s price tag over the last few years."

Sadangi, however, is poised to disburse loans to half a million farmers by next year. The scheme would involve a nano-finance (smaller than a micro-finance) company with 20 million dollars from U.S.-based financier JP Morgan.

IDEI has also tied up with JP Morgan up to 2014 to sell carbon credits at seven cents annually per unit from the fuel-saving treadle pumps. It sold 1.7 million tonnes carbon equivalent between 2004 and 2007 alone, and has received 87,000 dollars in total so far from the arrangement.

Sadangi is now busy working on low-cost sprinklers and water storage tanks, as well as looking into solar and wind pumps – still with the small farmers in mind.