CANCÚN, Mexico, Dec 3 2010 (IPS) - The Southern African Development Community (SADC) is moving to support its member countries to tap into benefits from the reducing emissions from deforestation and forest degradation (REDD) framework. 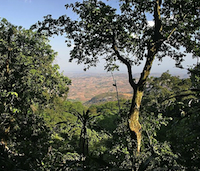 Destruction of forests both contributes to carbon emissions and deprives the planet of an important mechanism to soak up atmospheric carbon dioxide that contributes to global warming.

Since 1990, Southern Africa has witnessed high rates of deforestation contributing approximately a third of the forested area lost in Africa over the past twenty years. By its own calculations, the 15-member Southern African Development Community (SADC) is responsible for roughly half of biomass carbon losses due to deforestation on the African continent.

The major drivers of deforestation have been identified as the expansion of agriculture, shifting cultivation and unregulated logging. All these are connected to high population growth, persistent poverty, increased energy demand and weak regulation and management of forests.

SADC has come up with a regional plan to help member countries deal with deforestation.

“The purpose our REDD Programme is to improve the capacity of SADC member states to manage and benefit from their national REDD programmes and also pool resources together to collaborate on REDD+ issues in which regional approaches make sense and are more cost efficient than those that can be attained purely by individual national actions,” said Nyambe H. Nyambe from SADC’s Natural Resources Management Unit.

The idea behind REDD and its expanded cousin REDD+ (covering conservation and sustainable management of forests) is that slowing and reversing the destruction of forests (in developing countries) will be rewarded with carbon finance (originating in developed countries). This money will provide incentives to protect carbon-storing trees and thus reduce emissions.

SADC’s REDD programme is putting in place systems to monitor forests and assess initial carbon stocks in the region as well as enable periodic carbon and greenhouse gas accounting.

Many SADC members face similar challenges in implementing the REDD+ framework that is taking shape in negotiations under the United Nations Framework Convention on Climate Change.

Along with other developing countries, SADC states are concerned over the elaboration of the funding mechanisms for REDD, including ensuring they can acquire the technology needed to credibly assess how much carbon is stored in their forests.

Proposals for where REDD funding should come from range from requiring contributions – additional to existing aid budgets – from rich countries to a UNFCCC fund set up for this purpose, to a straightforward tax on all carbon emissions above an agreed-on allowance, to entirely market-driven purchases of carbon offsets from forest conservation projects and a mixed bouquet of options in between.

There are also important differences of opinion over who would administer and distribute funds – again covering the spectrum from a market-based system with buyers seeking (credible) carbon credits at the best available price to a fund administered by the World Bank or a regional institution such as the African Development Bank.

SADC negotiators say that private carbon markets alone will not be able to generate sufficient resources to protect and enhance forests; they also doubt the markets can effectively assign carbon funds to where they are most needed.

According to Dr Promode Kant of the Institute of Green Economy, developed countries supporting a market mechanism claim that it would be efficient, effective and enhance equity while having lower administrative costs and providing protection against the risks of policy and governance failures in developing countries.

“There is no doubt that a market mechanism is more efficient than government-administered programs but it is difficult to accept their claim that market would either lead to greater equity or effectiveness,” Kant says,

“In the case of REDD… the buyers are very few, while producers abound. A market, when it does come into existence, would be tilted against the producers in the developing world from the beginning because it is essentially the developed world, the buyers, who would set the market rules.”

Whatever form of funding is finally settled on, SADC will be looking to put up a regional muscle to get its members to secure these funds.