MOHMAND AGENCY, Jan 1 2011 (IPS) - “I have now hired a house in the adjacent Dera Ismail Khan district where my three daughters are studying in a school,” says Jamil Shah Wazir of the militancy-riddled South Waziristan. Getting girls to school is a real struggle here. 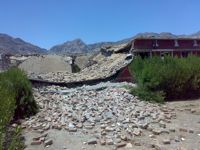 A bombed out school in Waziristan. Credit: Ashfaq Yusufzai

Shah tells IPS he is deeply perturbed over the turn of events in his hometown after the Taliban entered the Federally Administered Tribal Area (FATA) towards the end of the 2001, when their government in Kabul was dismissed by the U.S.-led forces.

“Soaring militancy is hampering the government’s efforts to uplift education, despite millions of dollars spent on education,” says education officer Hameedullah. “The FATA the situation is not showing any sign of improvement. The dropout rate in public sector primary schools stands at a staggering 69 percent.”

“My daughter and son were doing very well at studies but one night the militants dynamited both the schools,” says Jalal Akbar, a shopkeeper in South Waziristan. “Now for the past three months they have been sitting idle at home.”

According to official figures, 447 out of 638 schools in South Waziristan have been fully or partially damaged by Taliban militants.

FATA with a population of four million is facing an uphill task educating its young in the wake of both the militancy and the subsequent military operation. “Before the army operation militants had occupied schools and turned the buildings into hideouts,” education official Muhammad Khursheed tells IPS.

More than a million people have been displaced since security forces launched operations against militants in FATA in 2005.

The lawless FATA of Pakistan, which shares a porous 2,400 km border with Afghanistan is directly controlled by the federal government. It consists of seven tribal agencies and is adjacent to Khyber Pakhtunkhwa, one of the four provinces of Pakistan. Militants have set 673 schools on fire in this area since 2004.

Taliban militants consider female education to be against Islam, and take pride in blasting such institutions.

The FATA annual school census report 2009-10 shows that the dropout rate is 63 percent among boys and 77 percent among girls. Poverty and social taboos associated with female education are certainly a factor, but education has been hit further by the militancy bombshell.

“Reconstruction of the damaged schools requires 10 million dollars, an amount not possible for the government to provide,” says Khursheed.

The situation is similar in other FATA areas, or agencies as they are called. In Khyber Pakhtunkhwa, capital of the Khyber Agency located close to Peshawar in Pakistan, 282 schools have been blown up by militants, keeping about 13,000 female and 18,000 boy students back home. The remaining schools face continuing problems due to a prolonged curfew.

In the Mohmand Agency militants have destroyed 88 schools and one degree college, affecting about 16,000 students. “The children here are destined to become monsters because they are growing up in militancy,” says Jamal Shah, a mason, whose four children have been at home since the militants dynamited their school. “The destruction of schools is continuing.”

Azizur Rehman, principal of the Mohmand Degree College says 50 of his students have migrated to Peshawar to continue their studies. “The rest are poor, and their parents could not afford education expenses for their children in Peshawar or elsewhere.”

At least 94 education institutions have been closed down because teachers were threatened by militants.

The Bajaur Agency located on the border with Afghanistan has seen 46 schools destroyed by militants.

“We are telling our parents to shift to some safer area so we can get education but my father cannot afford it,” said Gul Pari, weeping. She left her studies halfway in 5th grade after she went to school one morning to find a flattened building. Pari, 16, a resident of the North Waziristan Agency which the U.S. has dubbed the international headquarters of Taliban and Al-Qaeda, says she still wants to study and play but can do neither.

The literacy rate in FATA is about 17 percent; only 3 percent of the women population is literate.

“The situation is really bad,” Rafia Begum, head teacher of the Charmang Girls High School tells IPS. “In June this year, two female teachers were killed by militants in Bajaur Agency.” Both teachers had been warned by militants to stop teaching girls, Rafia Begum said.

Hameedullah Khan, a lawmaker from FATA said the government was trying to rebuild schools but the militancy was in the way.