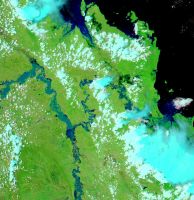 La Niña and El Niño are, respectively, the cold and warm phases of the ENSO cycle, and form part of the system that regulates heat in the eastern tropical Pacific Ocean.

The difference in pressure generates the trade winds, which blow east to west over the surface of the tropical Pacific, pushing the warm waters westward. The deeper, cooler waters then surface in the east, replacing the warm waters.

During episodes of La Niña, the differences in pressure are more marked, the trade winds blow more strongly, and the cold-water currents in the eastern Pacific intensify.

On the other hand, during El Niño, high surface air pressure in the western Pacific and lower pressure on the coasts of the Americas cause the trade winds to weaken or change direction, resulting in warmer water temperatures in the eastern Pacific.

“There has been a very rapid transition from El Niño to La Niña in 2010,” Kevin Trenberth, a senior climate scientist with the National Centre for Atmospheric Research (NCAR) in the central U.S. state of Colorado, told Tierramérica.

A very strong yearlong El Niño ended last May and within two months switched over to La Niña by July, said Trenberth.

The current La Niña has not only ended Australia’s 10-year drought, but also flooded more than 850,000 square kilometres, an area equivalent in size to France and Germany combined. It also has resulted in flooding in northern South America and brought drought conditions to the middle and southern parts of the continent.

As a consequence, agricultural production has been impacted. Global food prices reached a record high in December, the United Nations Food and Agriculture Organisation (FAO) reported on Jan. 5.

“There have been changes in the El Niño-La Niña cycle since the 1970s. It’s a complex cycle but the associated droughts, flooding and other manifestations have been stronger over the last 30 to 40 years,” Trenberth told Tierramérica.

Since climate change has fundamentally altered the global climate system, trapping more heat and about four percent more water vapour in the atmosphere, it is reasonable to conclude it has affected the ENSO cycle.

“It would be surprising if there wasn’t an effect,” Trenberth said.

It was Peruvian fishers who named El Niño after the Christ child (“niño” means child or boy, in Spanish), since the effects of the warming of the surface waters of the eastern Pacific ocean — such as bringing rain to the dry Peruvian deserts — show up around Christmas.

Over months, and sometimes years, the heat in the surface layer of the Pacific dissipates and the deeper colder water gets to the surface, aided by changes in the trade winds. This results either in a return to neutral conditions or the appearance of La Niña (“girl”, in Spanish), the “gift- giver”, bringing cold, nutrient-rich water that is a boon to marine life, supporting a larger fish population and increasing the fish catch.

Fishers might expect a good year ahead, as a strong La Niña is now dominating the Pacific Ocean. “This is one of the strongest La Niña events in the past half century, and will likely persist into the Northern hemisphere summer,” said Bill Patzert, an oceanographer and climatologist at the Jet Propulsion Laboratory of NASA (U.S. National Aeronautics and Space Administration).

ENSO has a three- to seven-year cycle, with a four-year average to go from El Niño to La Niña, but this varies considerably both in terms of periodicity and strength, explained Trenberth.

Each cycle is different and unpredictable and currently beyond the capabilities of computer climate models to emulate, he said.

While flooding and droughts have become measurably worse, there is no clear evidence that climate change has affected the ENSO cycle itself, for example, by shortening it as in the current cycle, said Trenberth.

Emissions from fossil fuels act like an extra blanket in the atmosphere, trapping additional heat from the sun.

Nearly all of that extra heat has gone into the oceans. Since the 1970s, the world’s oceans are getting measurably warmer and that is also likely to affect ENSO, noted Julia Cole, a climate scientist at the Institute of the Environment at the University of Arizona.

Historically, ENSO has had a huge range of variability and the drivers of the cycle are not fully understood, making it very difficult to determine how climate change is affecting it or to predict future changes in the cycle, Cole told Tierramérica in an email interview.

However, the latest research seems to show “that we may even see new ‘flavours’ of ENSO emerge as we move into the future,” she said.

Australia’s La Niña flooding is unprecedented. At least 10 people have died, with damage and losses estimated in the billions of dollars.

Much of the flooding is in the northeastern state of Queensland, whose rivers flow into the Coral Sea, and is expected to have a major impact on the nearby Great Barrier Reef.

Enormous amounts of sediments and pollutants are being washed off the land and are likely to have “a huge impact” on the world’s largest coral reef system, said Charlie Veron, former chief scientist at the Australian Institute of Marine Science.

“The very strong La Niña is certainly causing the floods, but climate change would seem to be enhancing the effects,” Veron wrote in an email.

Queensland’s vast sugar cane fields are drowning, but crops in Argentina, Brazil and Uruguay are parched by drought, pushing food prices to a record high by the end of December according to a FAO report released Jan. 5.

Continued drought in Argentina or winter kill from the severe cold in parts of Europe and North America could combine to drive food prices even higher, the FAO report warns.

Even though much of the southern Pacific has been cold under La Niña, 2010 tied 2005 as the hottest year on record, according to NASA’s Goddard Institute for Space Studies.