GAZA CITY, Feb 6 2011 (IPS) - Ripple effects of the Egyptian uprising are now spreading to Gaza, where some groups are planning a new rally next week. Moves by some Gazans to mimic protesters in Egypt, Tunisia and Yemen by taking to the streets are making the Hamas government nervous. 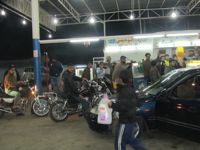 Government officials sponsored an official rally in solidarity with the Egyptian protesters earlier, but when a small group of journalists and bloggers organized their own, six women and eight men were arrested. Two of the women, known for their outspoken criticism of the regime, were beaten up.

“The government had already held a big demonstration on Friday, and most of the movements joined it, but most youth don’t belong to any faction here. I didn’t want to be part of that. I wanted to do something from me.”

Mahmoud describes what happened when he arrived at the Square of the Unknown Soldier, where most demonstrations are held in Gaza City. “Out of the blue, an officer wearing civilian clothes grabbed my hand and said ‘come with me.’ …He pushed me into a jeep and accused me of protesting against them. He said, ‘I’m going to teach you a lesson.’ I thought they were going to beat us.”

Mahmoud believes he was not beaten because a relative works for the government. Several hours later, after being blindfolded and interrogated, he was released. His telephone was confiscated and only returned two days later.

On Jan. 28, a Facebook page appeared calling for a revolution in Gaza and naming Feb. 11 a day of protest against the Hamas government. Although no one knows who is organizing it, Ma’an News reports that Fatah officials have repeatedly asked the agency to cover the initiative. Four days later, another page was set up on Facebook, calling for a revolution in Ramallah and the ouster of President Mahmoud Abbas.

Despite the beatings and arrests of the bloggers who demonstrated, Samah Ahmad el-Rawagh – a trainer for a human rights organization and youth activist – says she will participate in the Feb. 11 protest.

“I’m not playing an organizational role in this activity, but I have no problem participating to express my opinion. All of our lives, we have known our enemy is one – the Israeli occupation. But now we have two enemies, the Israeli occupation and the separation between Gaza Strip and the West Bank. Our demand is to end this separation and set a date for elections, to give us our right as youths to vote and choose the leadership that will represent us.

“What happened before won’t scare us away. I believe the youth are able to make change and we’re a youth community; we are more than the half of the population. It is up to us.”

But while the outcome of such protests is uncertain, what is certain is the difficulties residents of the Gaza Strip are facing. The border between Gaza and Egypt is sealed shut, fuel imports have been cut off, and hundreds of people cannot reach medical care or separated family members.

With insecurity and violence across Egypt, including its southern region along the border, workers who normally smuggle in fuel have fled to their homes or to fight Egyptian forces. The smuggling of fuel and other materials reached its lowest level after clashes between Egyptian residents of north Sinai and security forces intensified.

According to Mahmoud al-Shawa, president of the board of directors of the Palestinian Energy and Natural Resources Authority in the Strip, Gaza needs 800,000 litres of diesel (200,000 for the main power station) and 300,000 litres of petrol daily. Only half of that requirement was available even before the Egyptian uprising.

Most of Gaza’s supply must be smuggled through the tunnels from Egypt, since fuel from Israel is not only limited in quantity but too expensive for most residents.

“One litre of diesel (from Egypt) costs 1.7 shekels, compared to 6.16 from Israel (a dollar is 3.7 shekels),” says al-Shawa. “I am asking Salam Fayyad (the Palestinian Authority-appointed prime minister) and President Mahmoud Abbas (who governs the West Bank) to remove the taxes so civilians can buy petrol. Gaza has been under Israeli blockade for more than four years, and people have no jobs.”

Noting that the authority has had to ration petrol to the Strip’s 29 stations to stop panic buying, as well as to control prices, al-Shawa said he is particularly worried about Gaza’s hospitals, orphanages and vital enterprises such as bakeries and chicken farms.

“We have a big problem, and I am asking the world and America to remember Gaza. There will be a disaster if we don’t do something.”

Until Jan. 30, the Rafah crossing between Egypt and Gaza had been open five days a week for foreigners and Palestinians going in and out for medical treatment, to visit family and to attend school. On average, 400 Gazans would leave and 200 would return every day. Now the terminal is empty. The passport police, intelligence officers and other employees all left.

When Dr. Ghaza Hamad, chief manager of Gaza’s Department of Borders and Crossing finally managed to make contact with a liaison, he was told the situation in Egypt was too dangerous for staff to work and for the border to be opened.

“There are thousands of people who can’t leave Gaza or get back in,” said Dr. Hamad. “Those needing to leave Gaza include those with cancer or other critical disease. And those who are stranded in Cairo and other parts of Egypt are frequently patients who’ve finished with their treatment and who can’t afford to stay in a hotel or to rent a house. There is a need to open the border at least partially.”