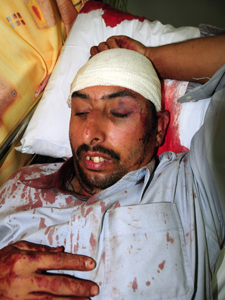 “We expats are victims of hate crimes because we didn’t leave the country or become part of the general strike called by the opposition to keep Bahrain on hold,” Nastufi Sharma, an Indian who has been working in Bahrain since 1997, told IPS. “To stop locals from going to work, roads were blocked… we were attacked.”

Sharma isn’t considering leaving the country yet, but risks unemployment if the situation deteriorates further.

Eight migrant workers died and approximately 49 sustained various injuries since Mar. 17 when the government with the support of Cooperation Council of the Arab Gulf States (GCC) peninsula shield troops started cracking down on demonstrations blocking roads in Manama – the financial capital of Bahrain. The government has also declared a three-month state of emergency to be enforced by the Bahrain Defence Force.

Most expats are not yet considering leaving the country, hoping for the situation to revert to normal. They fear losing their jobs and not finding new ones back home.

On Mar. 13 before the beginning of the attacks, the Civil Disobedience Support Committee sent a letter to foreign embassies in the country asking diplomatic missions to ask their nationals to leave immediately, while warning that the routes leading to the airport might not be safe. IPS obtained a copy of the letter.

Expatriates, mainly migrant workers from Asia, are in high demand for their skills and are valued for their low salaries – essential to prop up sustainable growth in Bahrain. Migrant workers represent almost half of the country’s population of 1.2 million. Migrant labour in the region is a huge source of remittance income in the workers’ home countries – and some embassies here seem to be taking the violent hate crimes against their nationals with a grain of salt.

The Prime Minister of Bahrain, Prince Khalifa bin Salman Al Khalifa, has met with Indian, Pilipino, Bangladeshi and acting Pakistani Ambassadors to assure them that the government is interested in the safety of all migrant workers in the country. There have been attacks on nationals of all these countries in the last few days. Al Khalifa said that expatriates are highly needed in Bahrain and their labour rights and safety would be protected.

There have been four deaths and around 40 injuries so far among Pakistanis, many of whom work as riot and security police. Ten Pakistanis are in critical condition.

“In my community that is estimated to have 65,000 Pakistanis, the death of one civilian and three policemen were reported, most of the attacks took place in Manama,” Aurangzeb, of the Pakistan mission to Bahrain told IPS.

After the attacks, most of the Pakistanis residing in Manama were evacuated to safer places in cities such as Isa Town, where they were housed in the Pakistan School and Pakistan Club. They will be shifted again to different accommodations soon, Aurangzeb said. The embassy hasn’t asked its residents to leave Bahrain.

Seven Bangladeshis have been hospitalised, three have died and four are under treatment. The number of victims is small according to the Bangladeshi Embassy when compared with the large number of Bangladeshis living in Bahrain – 100,000.

“Most of our victims were attacked in mid-March and I don’t blame anyone and I think they were assaulted for being caught in the middle of rioting and violence in the wrong time and wrong place,” Bangladeshi Ambassador Ali Akbar told IPS.

To protect the community, he said, the embassy advised Bangladeshi nationals to remain neutral and cautious and to avoid the venues of demonstrations.

The ambassador denied a case of a Sunni Bangladeshi national who is in coma after being attacked by Shiite demonstrators who cut his tongue off to prevent him from reciting Azzan. This case has been reported in almost all the local newspapers along with images of him in the hospital.

Sri Lanka Honorary Consul General P. B. Higgoda confirms that his community members were not asked to go home, however a temporary ban on new recruitment has been imposed by his government for those who want to enter Bahrain. “I don’t know when the ban will be lifted,” Higgoda said. There are approximately 14,000 Sri Lankan residents in Bahrain.

No attacks were reported among the Sri Lankan community, of whom 3,500 are domestic workers. Higgoda says this is because they follow the “laws and orders” of the country.

“Hopefully Indians are much safer now than two weeks back, as we have advised them to be extra careful and stay indoors after dark,” Indian Ambassador Mohan Kumar, told IPS. One Indian died in crossfire, while five have sustained minor injuries.

Indians represent the largest community in Bahrain with 350,000 individuals living in the country – 70 percent of them are labourers and semi-skilled workers. No warnings have been issued for Indians, as until now the country is safe if residents take extra precautions, according to Kumar. “We only advised at the beginning of the crackdown for housewives and children to leave if they fear for their safety,” Kumar said.

Situations are expected to be better with the deployment of security forces in major urban areas, however migrant workers will remain in danger as very poor security will remain in the old neighbourhoods of Manama where they reside.

The U.S. Department of State is urging its citizens to defer travel to Bahrain, and has advised those in the country to consider departing.