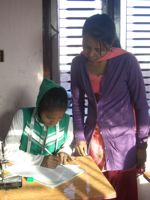 Pushpa Pariyar, 17, (sitting) joined the Maoists when she was just 10 after security forces killed her father. Credit: Sudeshna Sarkar

“Our People’s War would not have been possible hadn’t thousands of women cadres from the villages come forward,” acknowledged Prachanda, the former prime minister.

However, five years after the guerrillas signed a peace accord, fought an election and headed the government briefly, almost 1,200 women warriors have been left out of the benefits meant for former fighters.

“I walked with the PLA during the war, they were my family,” said Pushpa Pariyar, bent over a sewing machine at a training centre in Kathmandu. “Then came peace and I was discharged. It’s unfair.”

The 17-year-old is among the 4,008 combatants who were ‘honourably discharged’ last year after a UN verification found they had been recruited in violation of international norms. Nearly 3,000 had been inducted as minors, and the rest after the peace pact. Almost 30 percent of them are women.

Pariyar became a Maoist when she was 10. Her father Dil Bahadur Pariyar had joined the rebels and gone underground with them. In 2004, when he tried to visit his family, security forces killed him.

“Hounded by the army, our family split and all of us had to go into hiding,” Pariyar said.

Arghakhanchi in western Nepal, Pariyar’s home, is a remote, underdeveloped district that was among the hardest-hit with security forces arresting, torturing and killing people indiscriminately. Pariyar comes from the Dalit community – people thrust to the bottom of the social hierarchy and treated as untouchables.

During the civil war, Dalits flocked to the Maoists, attracted by their doctrine of equality and dignity for all. They were also among those the most victimised by the state.

“I wanted to be somebody and help build the nation,” said Pariyar. “But now, here I am, undergoing training in tailoring and wondering what fate has in store for me.”

When the uprising started, the PLA fighters were promised they would be assimilated into the national army. Almost 20,000 combatants, who passed the UN verification, are still technically eligible to join the army; however, the ‘dischargees’ do not have that hope any more. After they left the PLA camps last year, some stayed in touch with the party and received erratic financial support. Some simply disappeared.

“There are very significant difficulties for girls when they go back to society,” said Desmond Molloy, senior rehabilitation advisor with the UN Development Programme (UNDP). “They face social stigma, as they are perceived as having lived in a permissive and promiscuous environment. Also, many of them married fellow PLA members from different communities and when they return home, many with children, their families are not ready to accept the inter- caste marriages.”

Nisha Nepali, 19, left her home in Tanahun district in western Nepal because of the discrimination her Dalit family faced. “I joined the Maoists because I wanted to become somebody,” she said. Now married to a PLA soldier from a different community and nursing an eight-month-old daughter, her priority is to conceal from her husband’s family and village that she is a Dalit.

Maya Chaudhary comes from the Tharu community of southwestern Nepal, who, along with the Dalits, joined the Maoists en masse. The Tharus, once a powerful people believed to be the descendants of the Buddha, were displaced by waves of migrants from Nepal’s hilly areas and India across the border.

Chaudhary married Ramesh Bishwokarma, a Dalit, when both were in the PLA. He is still in the PLA camps while Chaudhary, who has a two-year-old son and is pregnant once more, is living with her in-laws in Dhangadhi in farwestern Nepal. Currently, she is seeking counselling from the UN.

“My husband doesn’t look after us any more,” the weeping woman told the UN gender officer. “He has stopped sending money. I am ostracised at my in- laws’ place because I am not from their community.”

When Rita Shrestha, in her early twenties, went home to her parents after being discharged, they hid her past and sought to get her married. But when a local journalist wrote an article on her past life as a guerrilla soldier, the groom’s family immediately called off the match. For weeks, Shrestha lived in depression.

Of the 4,008 ex-warriors, one man and a woman killed themselves, and there was one attempted suicide.  ”The discharged combatants have very high expectations, which makes it harder (for them) to accept the new reality,” says Molloy. “The Maoist leadership nurtured that expectation and they have to be the ones to tone it down.”

The former soldiers are now being persuaded by the UN and its partner agencies to either complete their school education, train for jobs or learn to run small businesses. Donors like Norway and the UK contributed to create a nine million dollar Peace Fund that is being used by the UN for the rehabilitation project.  More than half the women enrolled opted for micro- enterprises, but only 2.5 percent women for vocational training.

“That’s because it is not easy for women candidates to get job placements,” said Molloy. “Also, they are still expected to look after the children and the home. There is a huge societal pressure on them to conform.”  However, the diehards among them are still biding their time.

Kamala Shrestha , 23, comes from Sindhupalchowk in northern Nepal, one of the poorest districts. “Security forces came to our village, lined up seven people and shot them,” she says. “Some of them had nothing to do with the Maoists…. Within three months of joining the Maoists I got myself transferred to the PLA because I wanted to avenge the people of my village.”

Shrestha married fellow PLA fighter Badri Parajuli, who today is a company commander still living in a PLA cantonment. Shrestha lives in Kathmandu valley. “I can’t dissociate myself from them just like that. Besides, there are other ways of serving the party than carrying a gun.”