GABORONE, Apr 13 2011 (IPS) - In a country where the death penalty enjoys vocal support from both the government and the public, lawyer and politician Duma Boko is not afraid to stand firmly against it. Boko will be in court on Apr. 15 to argue for the life of a client against daunting odds. 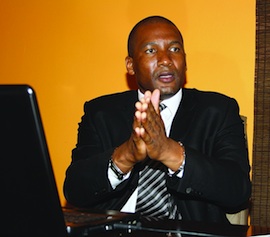 “I am against death penalty for many reasons,” Boko says, “one of them being the sheer irrevocability of the sentence of death. You can’t revoke it.”

Boko, who is also the leader the opposition Botswana National Front party, will be appealing the conviction and sentencing to death of Brandon Sampson. Sampson was convicted alongside South African citizen Michael Molefhe in 2007 for two murders. Their execution is scheduled for July.

Ahead of the court appearance, IPS spoke to the prominent human rights advocate about the case and the prospects for abolishing the death penalty in Botswana. Excerpts of the interview follow.

Q: What are Michael Molefhe and Brandon Sampson asking the court for in the hearing beginning Friday? A: They are asking the court to quash and set aside their convictions. As you know each one of them has been convicted on two counts of murder and sentenced on each to death.

I represent Brandon Sampson. He is saying his conviction was unfounded and the court failed and committed grave errors in analysis and examination of the evidence that was presented to it. On that basis, he is asking the court of appeal to quash and set aside that conviction and sentence as unsustainable and erroneous both in law and in fact.

Q: Doesn’t executing those convicted of murder help the families of the deceased feel better about their loss? A: I don’t think it makes them feel better. No one has done that study here to establish that it does.

What I think it does is that it cheapens human life.

The society that celebrates death by the state is an immature society. If we think our people are that immature, we need either to educate them or to establish if indeed they are.

Q: In light of the 2005 acquittal of Maauwe and Motsetlwa, whoseoriginal trial was set aside and the state delayed too long to re-try them, what are some system-wide problems with state-appointed lawyers in capital cases? A: A senior attorney of my standing can only take on these cases as the case is not paid at all – can only do it because he has got a passion to defend human rights.

Not all lawyers have that kind of passion and therefore not all of them would apply themselves with as much commitment and zeal as required fighting a case of this nature. We need to improve on that and secondly to make sure that they are given much facilities.

The state when it prosecutes has all the facilities. The constitution requires that in the marshalling of their defence, the accused persons be afforded the same facilities that the state has.

There is no equality of arms, if you will, when the attorney representing the accused person does not have the same resources as the state. That is basically violating the constitution and that violation must itself vitiate the imposition of death penalty on an individual. So it is a real challenge.

Q: It appears some of the most determined voices raised against capital punishment in Botswana have become muted recently – what are the prospects for abolition in the future? A: I don’t know what the prospects are. Certainly it will take a committed government at this stage or a very committed judiciary.

I think the latter is what we hope to have. We will not have a committed reaction to this issue from this government. It is a very populist government; it is a government that believes in sentences of this nature. It is government with a person at the helm who I doubt reflects on the jurisdiction and philosophical implications of some of these penalties and their efficacy in terms of either deterring or achieving social objectives.

So we will look to the judiciary. Even then, the calibre that operates now it is competent to pronounce against death penalty.

Q: You said earlier that your party fights for human rights in the country. As a BNF government President would you impose a moratorium or seek to repeal the death penalty in Botswana? A: Of course, when I am at the helm of that government, I will not sign anybody’s death warrant whether the law says so or not.

It is a position for which I don’t apologise for because it is a principled position.