COLOMBO, May 2 2011 (IPS) - It has been two years since the end of Sri Lanka’s decades long war, and life in general has begun to slowly edge back towards normalcy here. Not so for the country’s besieged media community, according to observers and journalists alike – reporting still feels hemmed in and muzzled, they say. 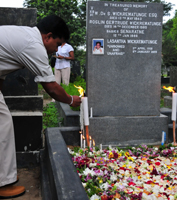 “Don’t forget that this is a nation that is wounded at its heart, the media reflects that psyche. The healing has not even begun,” Sunil Jayasekara, the convenor of the Free Media Movement (FMM), the country’s foremost media rights group told IPS.

Jayasekara observed that as the war reached its climax in late 2008, journalists found it hard to report objectively.

“The media became a part of the military operation,” Jayasekara said. “No one was able to report objectively, there was pressure on them from all parties.” That pressure, Jayasekara says, has not eased.

One of the most frightening examples of intimidation – the January 2009 murder of prominent opposition editor Lasantha Wickrematunge still remains a mystery.

Last week, the pro-opposition website lankaenews.com was temporarily banned while a case against it for contempt was tried.

“All these things together have made the media community fearful and doubting every move they make,” Jayasekara said, stressing that the climate of fear has prevented journalists from carrying out their work independently.

Coercion also comes in the form of government issued licences, especially for electronic media and by way of advertising revenue, Jayasekara said. Officials at very high levels and media owners have also been co-opted by political parties – diluting independence even further, he added.

“What you get is an industry that is deeply scarred,” Jayasekara said.

Other media observers feel that the situation has been aggravated by talented and experienced journalists leaving the country.

Namini Wijedasa, who was feted by peers as the ‘Best Journalist of the Year’ at the 2010 Journalism Awards organised by industry bodies including the Editors’ Guild of Sri Lanka, told IPS that she is simply stunned by the steep drop in standards.

“I feel that the dedication to journalism as a craft is waning,” she said. “It is being replaced by a job ethic to produce as much copy as you can.”

Wijedasa told IPS that the media has been fighting too many battles on too many fronts, that it simply does not have the stamina to make sure professional standards are met. Today’s media here does not have the resources and will to chase after important stories on issues like poverty, gender, governance and corruption, she said.

“You have to get out of that mentality of just churning out copy. You have to feel that what you do impacts the society you live in,” Wijedasa said.

Sanjay Senanayake, a media educator here, has tried to raise these issues with publishing houses on several occasions. Senanayake told IPS that editorial boards and management did not show any interest in improving standards.

“I don’t know where the real problem lies, but there is very big lack of willingness to make sure what we do, we do it right, despite the tiring conditions,” Senanayake said.

Jayasekara, Wijedasa and Senanayake all agree that the combination of fear and slacking professional standards have created a vicious cycle eroding public trust in the media.

“How on earth can you question accountability in government when you yourself are not accountable,” Senanayake laments.

Jayasekara feels the problem goes deeper than slacking copy. He told IPS that the media has to somehow begin to raise its voice as an independent force. A similar scenario arose in the late 1980s – when government pressure on the media was overbearing – leading to the formation of organisations like the FMM. “So far we have not seen those types of movements, that is why we feel the pressure so much,” he told IPS.

For Senanayake the little bit of hope there is, lies in media not concentrated in the capital Colombo. He points to two regional radio stations Uva and Kotamale, where journalists have been building community trust by working on stories that matter locally. “When people realise that these stories can make a change, they look at media differently,” he told IPS.

“When people trust the media more, it is difficult to muzzle it,” Jayasekara said.

But he feels that breaking political and other systemic pressures is vital for this. ” We have to get out of this cycle, they only way to do that is for the media to keep resisting the pressure.”