LIMA, Jun 6 2011 (IPS) - For the first time in the democratic history of Peru, a left-wing candidate has won the presidency. With the support of an overwhelming majority of voters in the provinces, retired lieutenant colonel Ollanta Humala defeated his right-wing rival Keiko Fujimori, whose strongest backing was in the capital, in Sunday’s runoff. 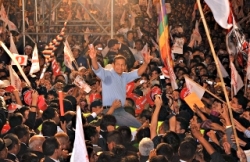 Based on the preliminary results, the election authority, ONPE, reported that Humala took 51.3 percent of the vote against Fujimori’s 48.6 percent. The ballots not yet counted are from rural areas in the provinces.

“We are going to bring about a major transformation,” Humala said near midnight Sunday, addressing thousands of cheering supporters in the Dos de Mayo plaza in Lima. The crowd had been waiting for him for hours in the square, a favourite staging ground for protest demonstrations and strikes.

Before making his victory speech, in which he promised a government of national reconciliation, Humala waited for the first official results, which were delayed until after 10 pm local time.

According to ONPE officials, the delay was due to the fact that by 8 pm local time, when the first projections were due to be announced, the only ballots that had been tallied were from the capital, the main port city, Callao, and the provincial capitals along the coast, where Fujimori was winning by a broad margin.

“All of the exit polls pointed to a victory by Humala and his supporters were already celebrating, so we decided to wait for more ballots to be counted from the provinces, to have more realistic results,” a source at ONPE told IPS.

In response to the delay, Humala supporters headed to the ONPE offices to complain. But the first preliminary results already indicated that Humala would beat Keiko Fujimori, the daughter of former president Alberto Fujimori (1990-2000), who is in prison for 25 years for corruption and human rights violations.

“There are two important political results coming out of these elections: for the first time a coalition including the left has won the national elections, and it has also managed to defeat all of the powers-that-be: the economic elites, the media, the (Catholic) Church, the government of the moment, and the rival candidate,” sociologist Sinesio López at the Catholic Pontifical University of Peru told IPS.

López, who was one of Humala’s professors when the candidate was earning his master’s degree in political science, said that throughout the campaign, and especially between the first and second rounds, all of these power groups carried out an intense smear campaign against the candidate.

Peru is one of the world’s top producers of a number of minerals, including silver, tellurium, copper, tin, bismuth, lead, molybdenum, arsenic, gold and selenium, and is home to Latin America’s biggest gold mine, Yanacocha.

Humala triumphed in 20 of Peru’s 25 regions, including the areas most heavily affected by social conflicts such as protests against mining, in which demonstrators have been injured and killed in the past few years.

One example is the southern highlands region of Arequipa, where the Southern Peru gold mining company operates, and where Humala took 66.4 percent of the vote and Fujimori just 33.6 percent, according to the preliminary results.

The voting patterns in the runoff were similar to those seen in the first round, on Apr. 10: Humala’s strongest support was in the impoverished southern highland regions, where a majority of the population is indigenous.

It was in those areas that the Fujimori regime had carried out a controversial forced sterilisation campaign in the 1990s, presented as part of the government’s anti-poverty strategy.

In Huancavelica in the southwest, the country’s poorest region, Humala garnered nearly 71 percent of the vote, compared to a mere 29 percent for Fujimori.

And in the neighbouring Ayacucho, another poor region that was among those hardest-hit by the violence during the 1980-2000 civil war, Humala won 72 percent against less than 28 percent for Fujimori.

“This is due to demand for economic growth with social inclusion,” López told IPS. “Humala will have to implement very aggressive social policies in the regions not yet reached by the economic boom.”

Fujimori, on the other hand, won by a comfortable margin in Lima, with nearly 57 percent of the vote against Humala’s 43 percent.

Harvard political science professor Steve Levitsky, who is in Peru studying the political system, said one of Fujimori’s big mistakes was her failure to distance herself from her father’s legacy, which was marked by corruption, human rights crimes and excesses like the mass sterilisation of Andean indigenous women.

“Keiko Fujimori recognised what she called ‘errors’ on the part of her father’s government,” he told IPS. “But at the same time, her team included people from her father’s regime, who formed part of an administration where corruption and human rights violations reigned. That was one of her big mistakes.”

* With reporting by Ángel Páez in Lima.