RAFAH, Jun 8 2011 (IPS) - Many hoping to find free movement between Egypt and Gaza have found the border gates at the Rafah crossing closed. Egyptian officials closed the gates on Saturday, according to Palestinian officials. 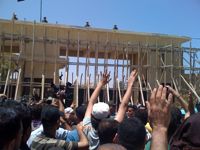 Palestinians agitate for the promised opening of the Rafah crossing. Credit: Mohammed Omer/IPS.

Ayyoub Abu Shaar, the official who usually communicates with the Egyptian side is no longer able to reach his counterpart. A number of ambulances and buses carrying patients are waiting between the crossings.

Behind the gate a scaffolding has been erected, supposedly for painting the gate. A young student called this “a ridiculous excuse to delay opening the Rafah crossing.”

Rafah crossing is the only access to Gaza not physically controlled by Israel. Egypt announced the permanent reopening of this crossing last week, after it was largely shut in June 2006 when Israel imposed its blockade, after Hamas won the Palestinian legislative council elections.

The closure of the Rafah border had been part of siege policy by Israel and Egypt aimed at cutting off Hamas. The siege has created economic hardship by limiting shipment of goods in and out of the Palestinian occupied territories.

Egypt’s decision to reopen Rafah came more than three months after former Egyptian president Hosni Mubarak resigned following 18 days of massive street protests against his rule. This easing of crossing restrictions was described by Abu Shaar as a “very courageous decision” which would enable him to offer all his full-time staff regular work again.

Now crowds have been banging on the gates, chanting “Open, Open, Open”, and at one point they broke the chain and went across the border. “I can’t watch my son die in front of my eyes,” the father of 11-year-old Mohammed Ali Saleh screamed at Egyptian troops.

Egyptian state television later said that the crossing had reopened, but only for pedestrians, as the work being carried out “prevented the passage” of vehicles. Palestinian officials, however, said that the border was still closed. Palestinian police moved Palestinians waiting to travel to a point away from the border fence.

Naziha Al-Sebakhi, 63, has been waiting to travel to Egypt to receive medical treatment on her leg. According to the newly announced Egyptian agreement, she is supposed to travel without restrictions.

“I beg you to open the crossing,” she says to Egyptian officials. “You brothers of Egypt have humiliated us for so long. Isn’t it time we had our dignity back?”

People whose residency permits have expired are expected to have problems returning to their families. Nahed Ashour, a 42-year-old father has been waiting a long time to get to his wife and two children in the Jordanian capital Amman. His hope is that the Supreme Council of the Armed Forces and Field Marshal Hussein Tantawi open the crossing, so he can leave before his visa expires.

The Rafah administration is expecting thousands of Palestinian families to arrive in Gaza this summer in hope of seeing their families. “It’s our land, our home, where our hearts and roots are,” says Ashour. “Our elderly relatives are there too and we want to come home.”

“If the world has a problem with us crossing through Egypt, then help us find us a solution,” says Naziha Al Sebakhi. “Don’t imprison me and just leave me here between four fences with no hope and no means of survival.”

Many have begun cancelling their flight reservations and medical appointments. Officials have no idea when Abu Shaar will get instructions to bring back his staff to operate the crossing.

“It was happiness,” said Al-Sebakhi, referring to Egypt’s announcement easing the restrictions on the Rafah crossing. “But it’s not completed.”