BRAZIL: Growing Pains in a Country Under Construction

RIO DE JANEIRO, Jan 11 2012 (IPS) - Major infrastructure works are sprouting like mushrooms in Brazil, generating millions of jobs and drawing more than 60 billion dollars in foreign investment in 2011. But this thrust has failed to sustain economic growth, which according to the latest projections is below three percent. 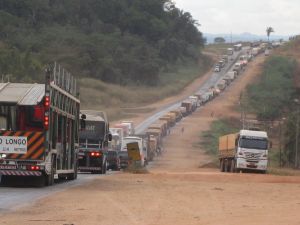 This traffic jam of trucks in the state of Mato Grosso illustrates the dire need for infrastructure in Brazil. Credit: Mario Osava/IPS

The stagnation of industry, which only grew 0.4 percent between January and November 2011, according to the Brazilian Institute of Geography and Statistics (IBGE), is one of the main reasons that GDP is growing at only one-third of Argentina’s growth rate, or half of Peru’s.

But the industrial figures are in stark contrast with the dynamism of the construction industry. Buildings are proliferating all over Brazil, and yet house prices have doubled or even tripled in the last three years in many cities, like Rio de Janeiro and Recife, further spurring the construction boom as well as fears of a real estate bubble.

“Minha casa minha vida” (My House, My LIfe), a public housing programme launched by the government in 2009, is funding the construction of three million affordable housing units by 2014, to reduce the housing deficit estimated at 5.5 million units last year by the Cities Ministry.

Furthermore, it is as though Brazilians have just discovered an urgent need to develop efficient logistics and energy infrastructure. The entire country is undergoing reconstruction.

The plan is to complete 12,265 infrastructure projects throughout Brazil by 2016, which will require investments of 1.5 billion reals (800 billion dollars), according to a study by the Brazilian Association of Technology for Equipment and Maintenance (SOBRATEMA).

In the frenzy of building, better planning is needed in the field of logistics, where several programmes are of dubious viability, such as a railroad still lacking a clear destination, or others without enough potential freight to cover the costs, and waterways without plans to surmount physical obstacles, said engineer and logistics expert Renato Pavan.

The government’s Growth Acceleration Programme (PAC), aimed at boosting investment in infrastructure and stimulating economic growth, will not fund some key projects like certain Amazonian waterways, said Pavan, a partner in the consultancy Macrologística, which is researching the best logistics options for the Brazilian economy.

But the large number of projects underway are mitigating the impact in Brazil of the economic crisis in the developed world and buoying economic growth, albeit at a moderate rate, with low unemployment.

From January to November 2011, 2.32 million new jobs were created, in spite of industrial stagnation.

Growing exports of grains and minerals have enhanced the importance of ports, with older ports being enlarged and improved. The port of Santos, the largest in Latin America, will double its capacity by 2013.

New ports are also being built from north to south in Brazil.

LLX, a port terminal logistics company belonging to a prosperous mining and energy group, is alone building two “superports” near Rio de Janeiro, one for exporting minerals and the other a complex for steel, mechanical, oil and energy industries.

Two more projects, also designed as industrial port complexes, are already a reality in Brazil’s Northeast, where state oil giant Petrobras is building large refineries that are expected to act as catalysts for attracting other companies to the area.

The project making the greatest progress, in Suape, near Recife, the capital of the northeastern state of Pernambuco, is today swarming with 80,000 workers, most of them engaged on building the refinery, three petrochemical plants and other factories, but many working on the over 100 companies already installed there, including a large shipyard and Latin America’s largest wheat flour mill.

In addition to the refineries at Suape and the other industrial port, Pecém, a third refinery is being built in the Northeast, in Maranhao state. This will be Brazil’s largest refinery with a capacity of 600,000 barrels a day.

Petrobras investments, expected to reach 224.7 billion dollars by 2015, are rescuing the Brazilian shipbuilding industry and driving port and maritime infrastructure, as the company’s priority is to exploit the oil discovered since 2006 in the pre-salt layer deep under the Atlantic ocean, 250 km from the Brazilian coast.

Electricity generation is another factor in Brazil’s construction boom. The government resumed work on hydroelectric power stations on large rivers in the Amazon region, overriding protests by environmentalists, and wind power received a boost last year because of the fall in the cost of equipment.

Thermoelectric plants fired by natural gas or oil-based fuels are also under construction, and the government has decided to finish building the country’s third nuclear power plant.

New railroads, extension and repair of roads, pipelines for oil, gas and ethanol from sugarcane, airports and other means of transport, and urban renewal required by the 2014 FIFA World Cup and the 2016 Olympics in Rio de Janeiro are also driving the building boom in Brazil.

Expansion of agriculture and the service sector is also helping to guarantee Brazil’s continued economic growth.

All of these things are partially compensating for the weak recent performance of manufacturing, which has been hit hard by the global crisis.

Industrial output declined by 7.4 percent in 2009, hit by the financial collapse in the United States. And although it recovered in 2010, posting growth of 10.5 percent, it fell again in 2011.

Recession or stagnation in the industrialised countries have led to a drop in demand and driven down prices for manufactured goods, thus intensifying competition of foreign-made goods with Brazilian industry which was already affected by the appreciation of the national currency, the real, against the dollar.

This has worsened Brazil’s “premature deindustrialisation,” pointed to by many economists and members of the business community, because of the strength of the real, boosted by commodity exports and the entry of foreign capital.

Last year Brazil’s trade surplus was 29.8 billion dollars, thanks to agriculture and mining exports that more than compensated for the trade deficit in manufactured goods, which amounted to 43.7 billion dollars in January to November 2011.

The imbalance is more acute in trade with China. Brazil’s exports to the Asian giant are almost exclusively iron ore and soy, against imports of goods with higher added value like electronic and industrial products.

The disadvantage of this unequal relationship does not really lie in the terms of exchange, since recently commodity prices have risen, due mainly to strong Chinese demand, and prices of manufactured goods have fallen, because of China’s cheap exports.

However, the industrial sector brings greater benefits in terms of economic and social development, as it offers better jobs that command higher wages and are more stable. Construction, on the other hand, where so many Brazilian workers are currently employed, is a short term activity for which wages are much lower.