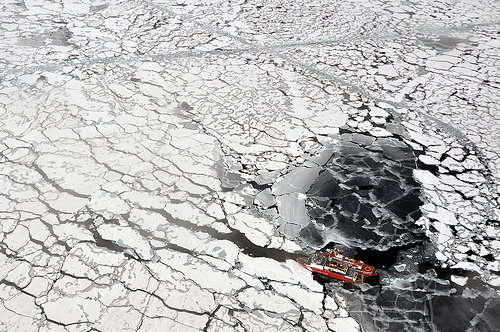 There are concerns this is the beginning of a 21st century “scramble for the Arctic”, but rather than staking territorial claims, non- Arctic countries want to exert economic and political influence in the region.

China already has a research station in Norway’s high Arctic and is building an 8,000-tonne icebreaker.

Canada has a great opportunity to become an influential Arctic power, and to ensure the resource-rich but fragile region doesn’t become a “Wild West” where the views of indigenous and other longstanding residents are ignored, said Tony Penikett, former premier of the Yukon, one of Canada’s three Arctic territories.

In 2013, Canada will chair the Arctic Council, a highly influential governmental forum originally created to promote international cooperation in the North. The council faces major issues such as expanded membership, increases in trans-Arctic shipping, resource extraction, and environmental protection of the fragile region already hard hit by climate change.

The council is unique amongst international bodies by including six Arctic indigenous groups as permanent members along with eight countries with Arctic territories: Canada, Russia, the United States, Norway, Finland, Sweden, Iceland and Denmark (Greenland). However, only these countries have a vote.

There are also six non-Arctic nations that sit in as observers today: the Britain, France, Germany, Spain, Poland and the Netherlands.

Disputes between Arctic nations are rare and the Council serves an important platform for discussion. Russia and Norway concluded a boundary treaty for the Barents Sea in 2010. Other territorial disputes, such as between Russia, Denmark and Canada over rights to parts of the Lomonosov Ridge, are being sorted out under the Law of the Sea Convention.

“However, the Council is struggling with the issue of addition of other non-Arctic nations,” Penikett told IPS.

The European Union, other European nations, Japan and South Korea have indicated they want observer status as well. “To remain relevant does the Council give other nations a larger role or remain an exclusive club?” he asked.

Russia and Canada have strongly opposed expansion. Indigenous groups also oppose it, fearing their influence and voice will be diluted, said Penikett, who will be a keynote speaker at the second annual Munk-Gordon Arctic Security Conference this week at the University of Toronto.

The conference theme is “The Arctic Council: Its place in the future of Arctic governance,” and will include policymakers and academics from all circumpolar states.

“Expansion would give the council a much stronger voice,” said Michael Byers, a professor of global politics and international law at the University of British Columbia.

Having a larger, more influential membership would bring more public attention to the region, Byers said in an interview. “Excluding other countries who have legitimate interests will simply create friction,” he said.

Last summer, the Russian-owned Vladimir Tikhonov became the first supertanker ever to navigate the 5,500-kilometre Northeast Passage. Also known as the Russian Northern Sea Route, it cuts thousands of kilometres off the distance between Europe and Asia compared to going through the Panama Canal.

Arctic waters will remain extremely dangerous for a long time. Last month a huge floating Russian oil drilling rig sank in a storm, killing 53 workers. Fortunately, it was being towed back to port at the time and no oil was spilled.

The Arctic Council has pioneered a new circumpolar search and rescue cooperation agreement, but it has not dealt with oil spill response or even considered environmental safety standards for oil and gas drilling, said Sara French, Arctic security researcher at the Walter and Duncan Gordon Foundation, a NGO with focus on the Arctic and water.

There have been some preliminary discussions about oil spills but nothing about safety standards for Arctic drilling, French told IPS.

“The Inuit Circumpolar Council has brought up the issue and they do want a common set of rules to protect the environment,” she said.

As chair, Canada could demonstrate its leadership on Arctic issues, including strengthening the voice of the indigenous people, she said.

Canada could be a leader – but it won’t under the Harper government, predicted Byers.

“Climate change and its consequences are the overriding issue in the Arctic,” he said.

“Canada is seen to have a retrograde position on climate change. That will make it challenging to be an effective leader on the Council,” said Byers.

Being chair of the Council could be good opportunity for Canada, he acknowledged. “However, I am worried that the current government will squander this opportunity.”