Money Is All That’s Green in Biodiesel

UXBRIDGE, Canada, Jan 19 2012 (IPS) - The only green in biodiesel fuel is the money producers make from it, new research has revealed. 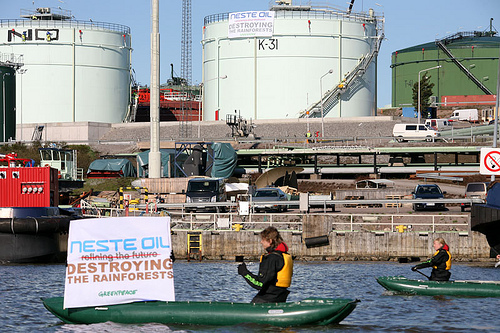 Greenpeace activists protest at a Neste refinery in Porvoo, Finland. Neste is set to become the world's largest consumer of palm oil. Credit: Greenpeace Finland/CC BY 2.0

Most biodiesel production is making climate change worse not better, studies show. Biodiesel from palm oil plantations may be the world’s dirtiest fuel – far worse than burning diesel made from oil when the entire production life cycle is considered.

Biodiesel made from the many palm oil plantations on Indonesia’s peatlands have a “carbon debt of 200 years”, said Louis Verchot, a research scientist at the Center for International Forestry Research in Bogor, Indonesia.

This means it will take 200 years of continuous biodiesel production from these palm oil plantations to pay off the “carbon debt” that results from land conversion and indirect land use changes.

Verchot and colleagues’ study is the first real-world look at the climate impacts of biodiesel and was published last month in the journal Ecology and Society. The study looked at biodiesel production involving palm oil, jatropha and soy at 12 sites in six different countries.

“Our study shows we have to eliminate a lot of what we’re trying to do in the name of protecting the atmosphere,” he said.

Global biodiesel production worldwide has risen by 10 times over the last eight years, topping 11 billion litres in 2010, according to the International Energy Agency. Ethanol production has risen by more than four times since 2000 and was close to 90 billion litres by the end of 2011. Those gains are being driven by government policies that mandate ever increasing amounts of biofuel be used in transportation fuels.

When burned, biodiesel emits between 40 and 75 percent less climate- heating carbon than regular diesel, according to various estimates. However, in order to grow palm oil, Indonesia’s peat forests have been cleared and burned, resulting in huge emissions of carbon – on the order of 200 to 300 tonnes of carbon per hectare – Verchot told IPS.

In addition, these wet peatlands are drained and when exposed to air the peat decomposes and releases about 10 tonnes of carbon per hectare per year. The resulting “carbon debt” is so large it will take 200 years of continuous biodiesel production from these palm oil plantations to pay it off, he said.

In other words, if palm oil was planted during Napoleon’s invasion of Russia, it would still be paying off its carbon debt today.

“I don’t know of any place in the world where a single crop has been grown that long,” Verchot said.

The size of the carbon debt of biodiesel from palm oil plantations has been seriously underestimated, said Ross Morrison of Britain’s University of Leicester. Morrison is co-author of an independent analysis completed before Verchot’s study was published.

Biodiesel from tropical peatlands emits more carbon than diesel from oil, Morrison and his colleagues reported in their analysis for the International Council on Clean Transportation.

Tropical peatlands in Southeast Asia hold more carbon than tropical forests and are under steady conversion to highly profitable palm oil plantations. Conversion of these lands also has negative impacts on local peoples and results in loss of habitat for many species, including endangered orangutans and Sumatran tigers.

“Projections indicate an increase in palm oil plantations on peat to a total area of 2.5 million ha by the year 2020 in western Indonesia alone – an area equivalent in size to the land area of the United Kingdom,” said Sue Page, co-author of the Leicester study.

The study also concluded that biofuels grown in Europe are no better than oil-based fuels, and biodiesel made from food crops like soy and rapeseed are worse. Bioethanol or biodiesel from waste cooking oil, on the other hand, could still offer carbon savings.

While palm oil plantations have long been criticised by environmentalists, Verchot’s study also looked at biodiesel made from Jatropha and grown in Ghana, Zambia and Tanzania. The study found it had a 100-year carbon debt on average, although the debt could be as high as 300 years depending on where it is grown.

Jatropha yields much less oil per hectare than palm oil and more land must be cultivated, increasing its carbon debt.

Biodiesel made from soy grown on Brazil’s dry cerrado grasslands in the state of Mato Grosso had the smallest carbon debt of the 12 study sites in six countries, at about 30 years. The main reason the carbon debt is low is because the cerrado doesn’t have much biomass to begin with, Verchot said.

It is unknown whether soy could actually be grown year and year for three to four decades.

“We’re not saying that all biofuels are bad. What we’ve found is that the right circumstances for growing biofuels are much more limited than people realise,” he said.

Verchot’s study did not look at the social impacts of biodiesel production. There is very little land capable of growing food on the planet that someone is not already using. Large-scale biodiesel crops often displace small landholders and local people who often don’t have formal land titles, resulting in growing numbers of conflicts over land grabbing.

The biofuel industry and its supporters see things very differently. One reason is that the European Union has a goal of biofuels providing 10 percent of all transport fuels by 2020. The U.S. has target of tripling biofuel use from 2009 to 2022. Other nations also have targets as well creating a very large market in need of supply.

Attention is turning to Africa and its more than one billion hectares of rain-fed croplands as the next big source of biofuels.

Biofuels can be Africa’s next big cash crop, according to the new book “Biofuels in Africa” published by the World Bank last year.

While noting that the effectiveness of biofuels in reducing emissions is in dispute, the U.S. or Europe will have to import increasing volumes of biofuels to meet their targets. In addition, the high fossil fuel prices mean Africa will produce much more biofuel for domestic markets in the coming decade, it concludes.

Governments, agribusiness, energy companies and venture capitalists have invested many billions of dollars into biofuels for at best a tiny net reduction and quite likely an increase in greenhouse gas emissions. Most climate experts say biofuels are not even in the top five things that need to be done to meet the climate change challenge.

“It turns out that biofuels are not the miracle crop people had hoped it would be,” Verchot said.