WASHINGTON, Jan 2 2012 (IPS) - The so-called “Arab Spring” led U.S. network television evening news coverage during 2011, comprising a total of about 10 percent of all the news coverage provided by the three major commercial networks during 2011, according to the latest annual review by the authoritative Tyndall Report. 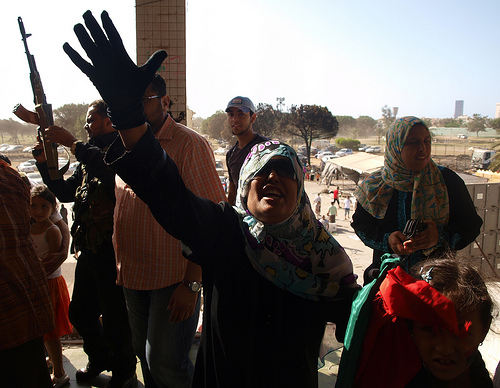 Indeed, the two top stories – of both foreign and domestic news – for the three networks during the year included the NATO-backed uprising in Libya and the killing of its long-time leader Col. Moammar Gaddafi, and the ouster of Egyptian President Hosni Mubarak and its aftermath.

The Libya story garnered a combined total of nearly 700 minutes of network coverage – or roughly five percent of total coverage – on the evening news programmes of ABC, CBS and NBC, while events in Egypt received nearly 500 minutes.

Much less time, however, was devoted to the uprisings in Syria (143 minutes), Bahrain (34 minutes), and Yemen (29 minutes), as well as to general overviews of what some experts have called the “Arab Awakening” (42 minutes) that has been roiling the countries of North Africa and the Middle East since last winter.

“Normally, the networks rev up foreign coverage only when the U.S. is embroiled in military action abroad,” noted the report‘s founder and editor, Andrew Tyndall. “But this year, they provided more international news in which the U.S. troops were not directly involved on the ground than in any other since 1991.”

While U.S. airpower was used as part of the NATO campaign to oust Gaddafi, no U.S. ground troops were deployed to Libya.

“Simply put, the type of foreign policy that attracts the most attention is war – the use of military force. Diplomacy is much less newsworthy and leaves room for more of the international angle in covering global hotspots,” he told IPS in an email exchange.

The two wars in which Washington had troops on the ground during 2011 – Afghanistan and Iraq – did not receive nearly the amount of coverage on the three networks as Libya and Egypt. The conflict in Afghanistan, which ranked eighth among all news stories, received 224 minutes of coverage, or less than half that given to Egypt. Iraq, from which the U.S. withdrew all its remaining combat forces last month, garnered a scant 71 minutes during the year.

The killing by U.S. Navy Seals of Osama bin Laden last May in Pakistan received 179 minutes of coverage, making it the ninth most- covered news story of the year, right behind Afghanistan.

Surveys by the Pew Research Center for the People & the Press among other polling and research groups show that about two-thirds of the general public cite television as their main source for national and international news, more than twice the number of people who rely on newspapers, and about 50 percent more than the growing number of U.S. residents who rely on the internet (43 percent).

The evening news programmes average about 22 minutes each. The report, which has used a consistent methodology for more than two decades, tapes these programmes during the five weekdays (Monday through Friday) over the year and, among other things, tallies the number of minutes that each programme devoted to the hundreds of news events covered over that period. Altogether, the three networks broadcast nearly 15,000 minutes of news coverage during the year.

The total time the three networks devoted to international coverage – not including Washington-based U.S. foreign policy coverage – in 2011 came to 3105 minutes, or a little more than 20 percent of all news coverage. That was about 250 minutes more than the average annual total between 1988 and 2010.

The ongoing partisan battles over the federal deficit and the debt ceiling ranked third among all stories at 477 minutes, while persistent unemployment ranked seventh (263 minutes) and the Occupy Wall Street protests (111 mins) gained the 18th spot. If combined, however, those three economics-related stories would have eclipsed Libya as the year’s top story.

Other stories in the top 20 included the Arizona shooting of a U.S. congresswoman (fifth ranked at 368 minutes), stock market fluctuations (13th, 153 mins), the football rape scandal at Pennsylvania State University (15th, 142 mins), and the trial of the late Michael Jackson’s doctor (19th, 106 minutes).

While a growing number of climatologists have argued that extreme weather of the kind covered by the media may well be a symptom of global warming, the news programmes, as in recent past years, made little or no attempt to point that out, according to Tyndall.

“It is safe to say that the network news is complicit in this country’s global warming denialism, reinforcing the problem, as opposed to reporting on it,” he told IPS.

Besides global warming, Tyndall pointed out other major international stories neglected by the networks included the looming threat of the Eurozone’s collapse and the possibility of a second global financial crisis, as well as China’s continuing rise and increased assertiveness, particularly along its maritime borders.

What appears well on the way to becoming a major international story in 2012, the growing tensions over Iran’s nuclear programme, received less than 20 minutes of the networks’ attention last year.

Besides the Arab Awakening, Japan’s disasters, Afghanistan, bin Laden, and the British royal wedding, the leading international stories included famine in the Horn of Africa (87 mins); Iraq and the scandal surrounding the alleged sexual assault by former International Monetary Fund (IMF) director Dominique Strauss-Kahn (71 mins each); and ongoing efforts to hunt down other Al-Qaeda leaders (46 mins).

Coverage also featured U.S.-Pakistan relations and Greek politics and protests (39 mins each); the mass murder in Norway, and Bahrain (34 mins each); the death of North Korean leader Kim Jong-il (34 mins each); the murder trial and appeal of a U.S. student in Italy (30 mins); Yemen (29 mins); London youth riots (26 mins); the Israel- Palestinian conflict (25 mins); the fall and replacement of Italian Prime Minister Silvio Berlusconi (24 mins); and the Palestinian drive for U.N. recognition (23 mins).

Tyndall said that both NBC and CBS broke 20-year-old records in the amount of foreign news coverage they provided, substantially more than ABC, which lagged far behind its two competitors on virtually every major overseas story except the British royal wedding.

The two networks showed “less and less resistance to using cheap, mobile, non-professional news-gathering tactics and sources,” such as cell phones, Twitter, and Skype, over the years.

“This means that one of the major past obstacles to global stories appearing on the news agenda – the relatively high logistical cost – is being removed,” he noted.