RAMADI, Iraq, Mar 27 2012 (IPS) - Barely three months after the pullout by U.S. troops, sectarian clashes between Sunni and Shia Muslims have begun to take a heavy toll across Iraq. 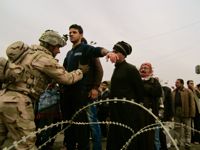 Tight security in Baghdad for the Arab Summit this week. Credit: Karlos Zurutuza/IPS.

The population of Iraq (about 32 million) is 60 percent Shia according to official sources, a claim disputed by Sunnis. The Shias dominate the government led by Prime Minister Nouri al-Maliki. Sunnis, who were dominant in the days of former president Saddam Hussein, have been growing increasingly restive under the new Shia regime.

Armed groups from both sides have reportedly clashed on Iraqi soil in recent months. In a video posted on the Internet, a Sunni insurgent group under the name of the ‘Anbar Brigade’ claimed an attack on a convoy of buses escorted by Iraqi army vehicles and allegedly carrying Shia militiamen to the Syrian border.

Anbar region to the west of Baghdad has been a hotbed of Sunni militancy in the past.

Many fear that the overwhelmingly Sunni local population in Anbar and the long and porous border with Syria is a perfect environment for Al Qaeda to turn this region into the massive insurgent stronghold it used to be.

Shia groups on the other hand are alleged to be receiving weapons from Iran. Al Alwani, Sunni member of Parliament, tells IPS at his house in Ramadi, the administrative capital of Anbar region, that the local airport at Najaf, a Shia holy city in the south of Iraq, is the main hub for receiving Iranian weapons.

“We have documented evidence that Iran is logistically and financially backing Al Qaeda in Iraq,” Anbar region governor Mohamed Qasim Abid, by profession an engineer who trained in Germany, tells IPS at his fortified office on the outskirts of Ramadi.

“From the very beginning, every action by terrorists has helped to justify the repression and marginalisation Iraqi Sunnis are facing since 2003.”

The gap between Shia and Sunni Iraqi Arabs grows by the day amidst a crisis that has sparked fears of renewed sectarian conflict. Prime Minister Maliki triggered a political crisis in December when he ordered the arrest of Iraq’s Sunni Vice President Tarik Hashemi – just one day after U.S. troops officially left Iraqi soil – over allegations of promoting terrorism.

The Shia prime minister denies such moves are politically motivated, but Sunnis say they are being increasingly marginalised from political power-sharing.

Now hosted by local Kurds in the Kurdish Autonomous Region in the north of Iraq, Hashemi has been constantly blaming Maliki for the sudden surge of violence.

Iraq Body Count has recorded the killing of hundreds since the Americans pulled out in December. A suspected Al Qaeda group sympathetic to the Sunnis has claimed several of these attacks which it linked with both Hashemi’s arrest and to the Arab Summit being held Mar 27 to 29 in Baghdad for the first time in more than 20 years.

On Mar. 20, more than 30 coordinated bomb attacks across the country left 50 people dead and more than 250 injured. The ‘Islamic State of Iraq’ – the Iraqi wing of Al Qaeda – claimed responsibility for the bombings. In a statement the group called this week’s gathering “the meeting of the Arab tyrants.”

“I’ve heard about volunteer fighters crossing the border from Lebanon to join (Syrian President Bashar) Assad but I assure you that the Iraqi government is working solidly to prevent the participation of any armed group from our territory.” Any changes on the other side of the border, he says, “will inevitably affect Iraq’s integrity.”

He also rejects the idea of any links between Tehran and Al Qaeda. He points to “other Arab countries” behind the Islamic militants – meaning Sunni groups. The last wave of attacks, he says, has been “a show of force by the Sunnis and an open challenge to the Iraqi government.

“Despite the constant aggression, we will keep fighting to claim our rightful space between our Arab and Persian neighbours; between Sunnis and Shias, but avoiding any foreign interference,” Shalah says. He describes himself as “a writer and poet with a strong political responsibility.”

Saad Yousif al Muttalibi, a senior official at the Ministry of Dialogue and Reconciliation makes a distinction between “insurgents” and “terrorists”.

“Reconciliation is under way with those Sunni fighters who fought against the American occupation; they have either joined the Awakening Movement or simply pulled down their weapons when the Americans left,” says Muttalibi from his residence in downtown Baghdad.

“The main obstacle for security are those Sunni religious extremists like Al Qaeda or Ansar al Sunna. They are terrorists and it’s impossible to bring them back to society so we don’t bother to speak with them.

“Unfortunately we have discovered that certain government officials have been in close collaboration with Al Qaeda by either providing them with either weapons or intelligence.”

But the reconciliation process might not be as smooth as Muttalibi claims. IPS spoke with a Sunni fighter who said: “We have enough infrastructure to operate throughout the whole country, we’re just waiting orders from our commanders.”