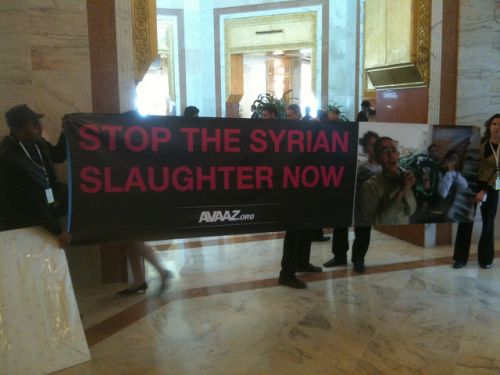 WASHINGTON, Mar 8 2012 (IPS) - As the Syrian army has stepped up its attacks against opposition strongholds in Homs and elsewhere, the U.S. and its allies have achieved little consensus in choosing a course of action to oust President Bashar al-Assad.

Hanna described the Free Syrian army as a “moniker for a local insurgency” that still lacks effective command and control.

The Syrian National Council has also faced growing divisions after a number of prominent members announced they were resigning from the group, citing a lack of progress and insufficient coordination with protestors on the ground.

The “Friends of Syria” meeting convened in Tunis last week exemplified many of these organisational contradictions. While representatives from some 70 countries and international organisations met to discuss ways to coordinate efforts to oust the Assad regime, they were unable to gain meaningful consensus on specific steps beyond the continuing application of diplomatic and economic sanctions.

Though there appeared to be widespread agreement over the need to coordinate humanitarian aid to Syria’s growing refugee population and the countless Syrians living with daily food and heating shortages, the scope of additional involvement proved to be a highly divisive issue.

Saudi Foreign Minister Saud Al-Faisal is reported to have stormed out of the meeting, angered by the unwillingness of the members to take stronger measures – he has explicitly endorsed arming the opposition.

Russia and China declined to participate in the Friends of Syria meeting, but many policymakers have reluctantly acknowledged that Russia is likely to a play a significant role in the outcome of the conflict despite its apparent intransigence.

“The only way to resolve this is through the Russians,” said former U.S. ambassador to Turkey Morton Abramowitz, speaking at the Century Foundation. He argued that perhaps Vladimir Putin will be more amenable to compromise after Sunday’s Russian election in which the Russian prime minister regained the presidency.

A new report issued by the International Crisis Group warned that Russian cooperation would be essential to a properly managed transition.

The report suggests that “If Moscow can be convinced that its current course maximises the risk of producing the outcome it professes to fear most: chaos” then it could create a situation in which “the (Syrian) regime would be confronted with the choice of either agreeing to negotiate in good faith or facing near-total isolation through loss of a key ally.”

Feltman, who recently returned from a trip to Moscow to discuss a way forward on the Syria issue, reported that “contact with Russia on all levels is continuing.”

Given the degree to which the Kremlin has invested in defending Assad over the past year, however, finding common ground with Russia will be a daunting task.