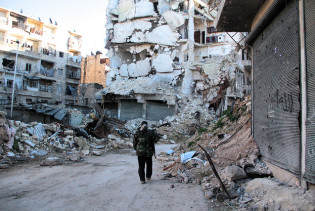 By Samer Araabi
Though President Barack Obama has been reticent to involve his administration too deeply in the Syrian uprising, revelations over the past week have shown near-unanimous agreement among the president’s top national security advisors for greater military intervention.

By Samer Araabi
This week, the United States officially recognised the newly-formed National Coalition for Opposition and Revolutionary Forces as the legitimate representatives of the Syrian people, culminating a two-year process of legitimising the Syrian opposition with the U.S. government.

By Samer Araabi
As Syrian rebels launched a new attack in Damascus, opposition leaders announced the creation of the National Coalition of Syrian Revolutionary and Opposition Forces, an umbrella group designed to be more representative of – and more influential with – anti-Assad forces on the ground.

By Samer Araabi
As the uprising in Syria becomes violently entangled with its neighbours, the expatriate opposition leadership is already formulating plans for a political transition following the fall of Syrian President Bashar al-Assad.

By Samer Araabi
As government security forces continue a week-long siege of Aleppo, Syria’s second-largest city, high-ranking Syrian officials have begun to defect from the regime in record numbers.

By Jim Lobe and Samer Araabi
The defection this week of a key general with longstanding ties to Syrian President Bashar Al-Assad was hailed Friday by officials in the administration of U.S. President Barack Obama as an important step towards ending the regime.

By Samer Araabi
WASHINGTON, Mar 5 2012 (IPS) - As the Syrian army has stepped up its attacks against opposition strongholds in Homs and elsewhere, the U.S. and its allies have achieved little consensus in choosing a course of action to oust President Bashar al-Assad.

U.S.: To Arm or Not to Arm Syrian Rebels, That Is the Question

By Samer Araabi and Jim Lobe
Just days before the opening meeting of the new international "Friends of Syria" in Tunis Friday, the debate over whether the United States should provide more support – including weapons – to opposition forces is gathering steam.

By Samer Araabi
Following a failed bid to pass a U.N. Security Council Resolution calling for regime change in Syria, Washington is considering other means to influence events on the ground, as the country slips ever closer toward civil war.

By Samer Araabi
As the Syrian uprising enters its ninth month, it faces some of its most daunting challenges to date, despite the consolidation of near-unanimous international condemnation of the Syrian government.

By Samer Araabi
Journalists, analysts, and policymakers have struggled to separate truth from fiction as the political situation in Syria steadily deteriorates. The lack of accurate, credible information has mired the Syrian situation beneath a fog of war that has complicated the world's understanding of the regime, its opposition, and the realities behind the uprising's latest developments.

By Samer Araabi
Two months into the uprisings that have shaken the Syrian regime of Bashar al-Assad, the outcome remains largely unclear. The Syrian government's repressive measures, complete with mass arrests, torture, and sizable military deployments, have severely dampen the movement but failed to extinguish the protests altogether.

Within the Arab Left, Contradictions Emerge Over Syria

By Samer Araabi
Though the Arab Spring has heralded newfound hope and optimism across the Middle East, the mood has darkened considerably as entrenched governments have fought back viciously against democratic opposition.
ADVERTISEMENT ADVERTISEMENT