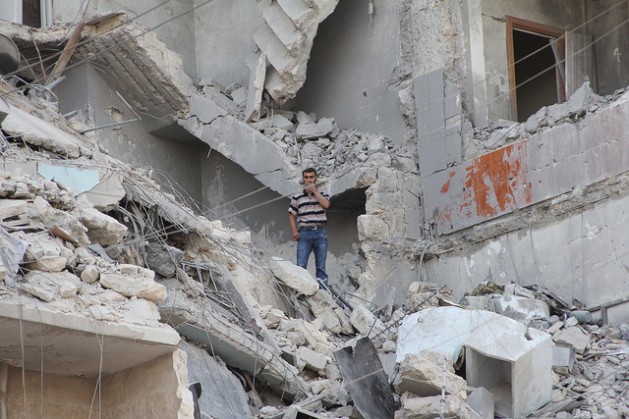 WASHINGTON, Feb 14 2013 (IPS) - Though President Barack Obama has been reticent to involve his administration too deeply in the Syrian uprising, revelations over the past week have shown near-unanimous agreement among the president’s top national security advisors for greater military intervention.

A New York Times story last week uncovered a strategy by Secretary of State Hillary Clinton and CIA Director David Petraeus to directly involve the U.S. in arming and supporting the Syrian rebels, in order to have a more direct influence on the course of events in the war-torn country.

The following week, during congressional testimony on the Benghazi embassy attacks, former Secretary of Defence Leon Panetta and Chairman of the Joint Chiefs of Staff Martin Dempsey both professed similar support for the idea of arming Syrian rebels. Director of National Intelligence James Clapper is also said to have backed the plan.

The revelations paint a very different picture from the official narrative of the Obama administration, which has remained publicly sceptical of the idea of providing weapons to unknown militant groups operating in Syria.

The proposals put in front of (Obama) don’t have a plan about how to get out, or if things don’t go according to plan. They don’t outline in any way how America is going to win, or achieve its goals.

“The U.S. long ago accepted the strategy of supporting insurgents as a way to counter the Assad regime or at least to appear to be doing something about Syria,” Leila Hilal, director of the Middle East Task Force for the New America Foundation, told IPS.

“Even if full-scale military support was not mobilised earlier, steps were taken to allow others to arm rebels. The indirect approach failed to turn the conflict and undermined the revolution.”

Foreign policy analysts have jumped to widely different conclusions about the disparate opinions of the president on one hand, his senior national security staff – the secretary of state, the secretary of defence, chairman of the joint chiefs of staff, and director of the CIA – on the other.

Writing for the Council on Foreign Relations, Elliott Abrams refers to the president’s decision as “tragically wrong”, and states that “one cannot escape the conclusion that electoral politics played a role” in ignoring the advice of his national security team.

Joshua Landis, associate professor at the University of Oklahoma and proprietor of the widely-read blog Syria Comment, disagrees.

“Obama doesn’t seem to agree with the prevailing interests in Washington, and the way they want to formulate our Middle East policy,” he told IPS.

Landis claims that instead of being influenced by the cabinet’s push for more involvement, “that’s a driver for him for staying out of Syria, because he knows powerful interests will quickly weigh in if we get involved there. He doesn’t seem to trust our Middle East policy-making apparatus.”

Pressed further on the question, General Dempsey clarified later in the week that he supported arming the Syrian opposition “conceptually”, noting that “there were enormous complexities involved that we still haven’t resolved.”

The interventionists’ plan was further undermined by a study within the CIA itself, where a team of intelligence analysts concluded that the influx of U.S. arms would not “materially” affect the situation on the ground.

Landis also cautioned that “the proposals put in front of (Obama) don’t have a plan about how to get out, or if things don’t go according to plan. They don’t outline in any way how America is going to win, or achieve its goals.”

Little is known about the current state of U.S. involvement in the two-year Syrian uprising, which may have claimed the lives of over 60,000 Syrians. Senior White House officials have repeatedly expressed concern that increasing the arms supply to the Syrian rebels may result in weapons falling into the “wrong hands”, a concern exacerbated by the influx of foreign fighters in Syria.

As Al-Qaeda-affiliated militants have risen in the ranks of the armed Syrian opposition – partially due to better financial backing, equipment, training, and experience in Iraq/Afghanistan – it has become increasingly difficult to disentangle such groups from other opposition elements.

Even the very same cabinet members who have vocally supported arming the Syrian opposition have expressed grave reservations about the increasingly extremist inclinations of the rebels. Hillary Clinton herself has warned that “the opposition is increasingly being represented by Al-Qaeda extremist elements,” a development she considers “deeply distressing”.

Thus far, Washington’s efforts to marginalise militant Al-Qaeda groups have largely backfired. After the U.S. designation of Jubhat Al-Nusra, the largest Al-Qaeda-linked fighting group in Syria, as a foreign terrorist organisation, most of the Syrian opposition leadership jumped to their defence.

Moaz Al-Khatib, the titular head of the Syrian opposition’s main coalition, the National Coalition for Syrian Revolutionary and Opposition Forces, immediately defended Jabhat Al-Nusra’s role in the uprising as “essential for victory”.

Nevertheless, Washington has been covertly supporting rebel groups for well over a year, with “non-lethal aid”, intelligence, and other unknown means.

The recent statements by Clinton and Panetta, therefore, still reveal little about the actual relationship between the White House and the Syrian rebels.

President Obama openly criticises the idea of armed assistance but has been silently supporting the rebels, while his administration’s liberal interventionists who have openly called for a more militant role have also expressed grave reservations about the ideology and direction of the very people they hope to arm.

These varied opinions and perspectives leave the door open for any number of policies toward Syria.”No one has taken any option off the table in any conversation in which I’ve been involved,” said Dempsey.

“Clearly…the people Obama has tried to put forward, all of his appointees, are not in favour of a muscle-bound Middle East policy and are not in favour of more military involvement,” he said. “They’re consistent with his overall plan, which is not to get involved with Syria, not to start a war with Iran.”