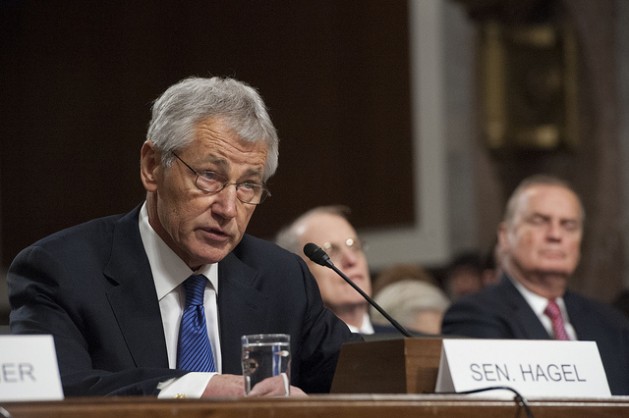 WASHINGTON, Feb 2 2013 (IPS) - If former Defence Secretary-designate Sen. Chuck Hagel’s lacklustre performance at his confirmation hearing Thursday heartened neo-conservatives and other hawks opposed to his nomination, those who argued that the Israel lobby has been exerting too great an influence on U.S. foreign policy were ecstatic.

Indeed, Stephen Walt, the Harvard international relations professor who co-authored the “The Israel Lobby and U.S. Foreign Policy”, issued a special thanks to the Senate Armed Services Committee that held the hearing on his foreignpolicy.com blog Friday, suggesting that controversial 2007 book should sell like hotcakes after what he called “the Hagel circus”.

“I want to thank the Emergency Committee for Israel, Sheldon Adelson, and the Senate Armed Services Committee for providing such a compelling vindication of our views,” wrote Walt, who, among other things, has been accused of anti-Semitism for writing a book that criticised the allegedly excessive influence the Israel lobby wields over U.S. foreign policy and the public debate that surrounds it.

As evidence, Walt cited the number of mentions of Israel and its most powerful regional foe, Iran, received in the course of Hagel’s eight-hour ordeal – 166 and 144, respectively, according to a compilation by the Internet publication, Buzzfeed.

By comparison, he noted, the epidemic of suicides among U.S. troops – a necessary concern for any incoming Pentagon chief – was addressed only twice.

In fact, the degree to which Israel and the threat posed to it by Iran dominated the hearing was somewhat understated by Buzzfeed. The full transcript revealed that Israel was brought up no less than 178 times, followed closely by Iran with 171 mentions.

Those numbers compared with a grand total of five mentions of China, the central focus of the Obama administration’s much ballyhooed “pivot” from the Middle East to the Asia/Pacific; one mention (by Hagel himself) of Japan, Washington’s closest Asian ally whose territorial dispute with China has recently escalated to dangerous levels; and one mention of South Korea, Washington’s other major treaty ally in Northeast Asia.

Similarly, NATO, Washington’s historically most important military alliance – and one with which it fought a successful air war in Libya last year and is currently fighting its 12th year in Afghanistan – warranted a total of five mentions.

“It is extraordinary that, in an eight-hour hearing, as little attention was devoted as it was to issues such as China and NATO, which ought to be near the top of the concerns for any secretary of defence of the United States,” said Paul Pillar, a former top CIA analyst who served as the National Intelligence Officer for the Near and South Asia from 2000 to 2005.

“The emphasis on Israel and Iran – which, in American politics, has become for the most part an Israel issue – demonstrates that the senators were far less concerned with the strategic questions that the secretary of defence should be focused on and much more interested in trying to defeat a nominee who has strayed from political orthodoxy, especially on issues related to Israel,” he told IPS.

Hagel, a decorated Vietnam War veteran and former Republican senator from Nebraska, has come under sustained attack from neo-conservatives – who still exercise a preponderant influence on the Republican Party’s foreign policy views despite the general unpopularity of the Iraq war which they championed – since he was first rumoured to be Obama’s top choice to succeed Leon Panetta as Pentagon chief in mid-December.

The anti-Hagel attacks have been carried out by a number of groups, such as the Emergency Committee for Israel (ECI), that have refused to disclose the identity of their donors.

The New York Times reported Sunday that billionaire Sheldon Adelson, the single biggest contributor to the Republican presidential campaign last year and a staunch supporter of Israeli Prime Minister Benjamin Netanyahu, was involved in the campaign, by far the most expensive and organised ever mounted against a cabinet nominee.

Initially joined in their attacks by some leaders of the more-mainstream and bipartisan Israel lobby, they charged, among other things, that Hagel was anti-Semitic (in part because he had used the phrase “Jewish lobby” on one occasion) and hostile to Israel.

Conversely, they complained, he has been too sympathetic toward Palestinians, too eager to engage Iran and other Israeli foes diplomatically, and too averse to using military force, particularly against Iran if negotiations over its nuclear programme fail.

On these issues, they argued in a mantra subsequently adopted by half a dozen Republican senators, Hagel was “out of the mainstream” or even “far to the left of” Obama himself.

In fact, Hagel’s views on the Middle East and the use of military force, in particular, not only largely reflect those of the administration and, according to public-opinion polls, of a war-weary electorate, but also of most of the foreign-policy elite. Dozens of retired top-ranked diplomatic, intelligence, and military officials, as well as former Cabinet officers from both Republican and Democratic administration have rallied to Hagel’s defence in recent weeks.

But those “mainstream” views are not reflected in Congress, where the Israel lobby has long wielded its greatest influence.

While its main institutions, such as the American Israel Public Affairs Committee (AIPAC), declared their neutrality on the nominee after his formal nomination by Obama earlier this month, they worked with sympathetic senators from both parties and their staffers to ensure that particular questions would be asked that would elicit reassuring answers with respect to both supporting Israel and preventing Iran from achieving a nuclear bomb by any means necessary.

The effort – which was supplemented by angry prosecutorial performances by several senators, notably John McCain, Lindsay Graham, and Ted Cruz, closely associated with neo-conservatives – largely worked, as Hagel recanted or softened some of his more-provocative previous statements to the disappointment of many of his supporters.

But, in some respects, the effort, as suggested by Walt, succeeded too well, simply because it demonstrated quite dramatically to the interested public how completely Israel dominates the foreign-policy agenda, at least on Capitol Hill.

After all, the U.S. remains the world’s one superpower with interests in every country. Its defence budget – at well over half a trillion dollars this year — is greater than the combined budgets of the 10 next-most powerful militaries.

Several key regional powers with which Washington has been trying hard to build or already enjoys strong defence relationships – notably India, Brazil, Saudi Arabia, and Indonesia – were not mentioned even a single time. Vietnam was mentioned 41 times but exclusively in relation to Hagel’s wartime service there or his work as a senior official in the Veterans Administration.

“They were not asking questions that had any relevance to the tasks facing the secretary of defence, in terms of either the military or budgetary challenges we face,” noted Amb. Chas. Freeman (ret.), whose appointment early in the Obama administration to head the National Intelligence Council (NIC) provoked such a furious campaign by neo-conservatives and key Israel lobby figures that he felt compelled to withdraw his name from consideration.

“So there was no serious discussion of defence or larger strategic issues,” he told IPS. “What was there was a lot of grandstanding about whether or not the nominee was politically correct.”