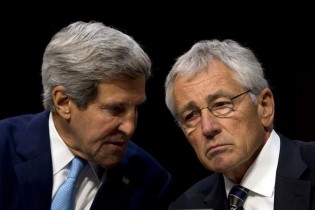 By Jim Lobe
Despite an appeal Thursday by 15 right-wing Republican senators for President Barack Obama to withdraw the nomination of Chuck Hagel as his next defence secretary, the former Republican senator from Nebraska appears virtually certain to be confirmed as Pentagon chief by the full Senate next week.

By Jim Lobe
If former Defence Secretary-designate Sen. Chuck Hagel’s lacklustre performance at his confirmation hearing Thursday heartened neo-conservatives and other hawks opposed to his nomination, those who argued that the Israel lobby has been exerting too great an influence on U.S. foreign policy were ecstatic.