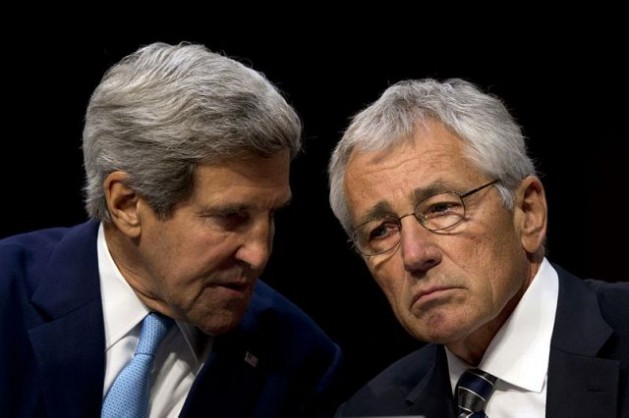 WASHINGTON, Feb 25 2014 (IPS) - Signalling a somewhat more modest global U.S. military posture, Pentagon chief Chuck Hagel Monday called for sharp reductions in the size of the U.S. Army, the service that has borne the brunt of the occupations of Iraq and Afghanistan over the past dozen years.

At the same time, however, he urged an increase in the size of the Special Operations Forces (SOF), the elite military personnel charged with training foreign counterparts and carrying out often-secret missions, including assassinations and raids such as the one that killed Osama bin Laden in Pakistan in 2011.

The cuts not only reflected the end of U.S. occupations in Iraq and Afghanistan, but also the aversion to the prolonged commitment of ground troops in foreign countries.

Speaking a week before President Barack Obama is due to unveil his 2015 budget request, Hagel said he will also ask Congress to phase out key weapons systems, including the fabled Cold War-era U-2 spy plane, which will be replaced by drone aircraft, and A-10 “Warthog” jets that have been used for several decades to provide close-air support for ground forces.

“This is a time for reality,” Hagel said told reporters during a press briefing in which he asked Congress to approve 496 billion dollars in military spending for the next fiscal year.

That does not include an additional 26 billion dollars approved for the Pentagon by Congress as part of an “Opportunity, Growth and Security Initiative” budget deal late last year.

“This is a budget that recognises the reality of the magnitude of our fiscal challenges, the dangerous world we live in, and American military’s unique and indispensable role in the security of this country and in today’s volatile world.”

The proposed cuts to the Army captured the national media headlines. Under Hagel’s proposal, which has been endorsed by the chiefs of the four major services, the active-duty Army would be cut from the current 522,000 troops to between 440,000 and 450,000. That would bring the Army to its smallest size since the eve of Washington’s entry into World War II.

The implications of such a cut were not lost on observers who noted that they not only reflected the end of U.S. occupations in Iraq and Afghanistan, but also the aversion, apparently shared by the Obama administration and the general public alike, to the prolonged commitment of ground troops in foreign countries.

Washington withdrew all of its forces from Iraq in 2011 and plans to withdraw all but a few thousand from Afghanistan by the end of this year.

Just three weeks ago, a Pew Research Centre poll found that, for the first time, majorities (52 percent) of U.S. respondents have concluded that Washington had “mostly failed” to achieve its goals in both Iraq and Afghanistan. Fewer than four in 10 agreed with the notion that the U.S. had “mostly succeeded” in both countries.

“Since we are no longer sizing the force for prolonged stability operations,” Hagel, who served in the Army in the Vietnam War, said Wednesday, “an Army of (the current) size is larger than required to meet the demands of our defence strategy.…As we end our combat mission in Afghanistan, this will be the first budget to fully reflect the transition [the Defence Department] is making after 13 years of war – the longest conflict in our nation’s history.”

“In saying that, he was essentially acknowledging the fact that the American public won’t stand for that kind of intervention any time soon,” William Hartung, a veteran defence analyst at the dovish Centre for International Policy (CIP). “A majority of them understand that spending trillions of dollars and losing thousands of lives in those wars have not made anyone safer.”

“The real question is whether we can roll back the ‘go anywhere, fight any battle’ mentality of the Pentagon,” Hartung added in an email exchange. “Whether it’s drones, Special Forces, or precision bombs, war is war, and it’s time to take the United States off of a perpetual war footing and craft a truly defensive military force.”

Indeed, in his remarks, Hagel stressed that Washington’s SOF will continue to grow – from roughly 66,000 today to just shy of 70,000 in 2015 – an increase of almost 300 percent compared to just a decade ago.

Each of the military services and each of the regional commands (SouthCom for Latin America, Africom for Africa, CentCom for the Near East and parts of South and Central Asia, and PaCom for the Asia-Pacific) – have their own elite SOF units.

McRaven, whose efforts at easing human-rights restrictions on training foreign militaries and circumventing State Department oversight of some aid programmes have proved controversial, has nonetheless been effective in building his “empire” in major part  because of its compatibility with Obama’s desire to lighten the U.S. military’s “footprint” in conflicted regions without reducing its effectiveness and lethality.

“In his State of the Union address, the President declared that our nation must move off a permanent war footing, and Secretary Hagel’s speech today took one major step in that direction.” noted Miriam Pemberton, another defence analyst at the Institute for Policy Studies here. “But, while long-term occupations are off the table now, the expansion of Special Forces means that under-the-radar invasion are not.”

Ironically, Hagel’s budget proposal reflects in many ways the strategic vision of former Pentagon chief Donald Rumsfeld, who strongly favoured the development of high-tech combat systems, heavy reliance on air power, and small, nimble ground forces who could strike from so-called “lily pads” (or temporary bases) anywhere on the globe within a short period of time. His so-called “Revolution in Military Affairs,” or RMA, however, was side-tracked enormous costs of the Iraq occupation.

The Obama administration has revived that vision, without explicitly admitting it, with the priority it has accorded to cyber-warfare capabilities, SOF, ever-more sophisticated drone technology, its intended retention of all 13 aircraft carriers, and its ongoing efforts to negotiate access agreements to foreign military facilities, particularly in the Asia-Pacific, East African, and Sahelian regions.

Hagel’s proposal will now be taken up by Congress, which is certain to resist a number of its components, including proposed base closures and the phase-out of weapons systems that provide jobs in key legislative districts around the country.

Hagel’s proposal also ignored the across-the-board budget-slashing cuts mandated by law under the so-called “sequester” that took effect in 2013 and continues in force pending further legislative action. They would require the Pentagon to cut an additional 115 billion dollars from its budget over the next five years.

At the height of the Iraq war in 2006, Washington accounted for about half of global military spending. Its budget has since fallen to just over 40 percent, according to Peter Singer of the Brooking Institution. Under the sequester’s limits, it would decline to about 38 percent.

If it remains in effect, the Pentagon would be forced to mothball one aircraft carrier, further reduce the Army’s size to 420,000, and cut into the Marine force as well, among other cost-saving measures.