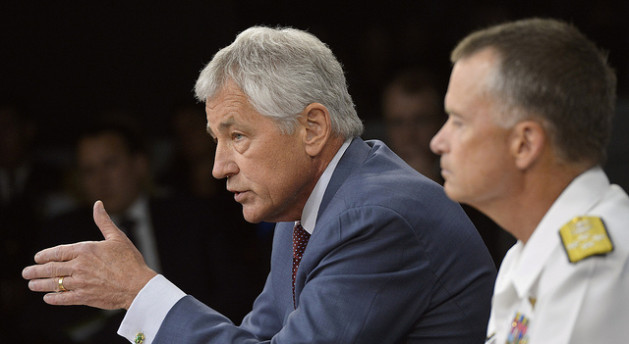 WASHINGTON, Aug 15 2013 (IPS) - The U.S. secretary of defence has unveiled a series of new directives aimed at cracking down on an epidemic of sexual assaults in the armed forces, an issue that has seized the very top levels of the military brass in recent months.

According to the Pentagon’s most recent estimates, some 26,000 sexual assaults took place within the military ranks last year. That number represented a 35-percent increase over similar estimates for 2010, and fuelled a growing sense of outrage that some say could result in legislative action in coming months.

On Thursday, Defence Secretary Chuck Hagel described the elimination of sexual assault among the armed forces as one of his agency’s “top priorities”, requiring “absolute and sustained commitment”.

Building on a series of actions announced in May, Hagel has now ordered the Defence Department to create a victim’s advocacy programme. Critically, such units would ensure that those alleging assault are given their own legally trained representation, long a key demand by some lawmakers and advocates.

The directives will also move oversight for investigations up the chain of command and outside of victims’ own military units, strengthen prohibitions on “inappropriate relations” involving trainers or recruiters, and allow for those accused of assault (rather than victims) to be reassigned to other units.

The announcement received immediate response, despite the fact that both Congress and the president are currently out of Washington on summer breaks. While most lauded the actions as moving in the right direction, there was broad agreement that they did not go far enough.

“The initiatives announced today are substantial, but only a step along a path toward eliminating this crime from our military ranks,” a White House press secretary said Thursday on behalf of President Barack Obama, who in May sharply directed the Defence Department to take extraordinary steps to curb military sexual abuse.

“The president expects this level of effort to be sustained not only in the coming weeks and months, but as far into the future as necessary.”

Advocates reacted even more strongly, referring to most of the new mandates as mere tweaks.

“The solutions announced today demonstrate that the U.S. Department of Defence is still only wading in the shallow end on these issues, unable to create the deeper, large-scale solutions our service members and veterans need.”

At issue for many is a decision that Defence Secretary Hagel, who took over his current position in February, has already indicated he would not willingly take: moving the responsibility for investigating and prosecuting sexual assaults outside of the military command structure altogether.

“The [Defence Department] order falls short of reform that would protect victims from the outset – by keeping the decision to prosecute within the chain of command,” Taryn Meeks, a former U.S. Navy lawyer and now executive director of Protect Our Defenders, an advocacy group, said Thursday in response.

While several pieces of legislation are currently pending in the U.S. Congress to address various parts of the assault crisis, just one would take the step of requiring completely independent prosecution.

The sponsor of that bill, Senator Kirsten Gillibrand, stated Thursday that the Pentagon’s actions were “positive steps” but not the “leap forward” required.

“As we have heard over and over again from the victims, and the top military leadership themselves, there is a lack of trust in the system that has a chilling effect on reporting,” she said.

“Three hundred and two prosecutions out of an estimated 26,000 cases just isn’t good enough under any metric. It is time for Congress to seize the opportunity.”

According to Protect Our Defenders’ Meeks, 46 senators have publicly supported Gillibrand’s amendment.

“[W]e are very close to this fundamental reform of the system,” Meeks says. “We are at a historic moment and we hope that all lawmakers will see this as the tipping point.”

More broadly, such an environment has been widely seen as coercive, resulting in toxic situations for those who file cases and, as Gillibrand notes, intimidating countless other victims into silence.

Of those who did report an assault last year, nearly two-thirds said they experienced retaliation, according to an official report. A quarter of military assault victims identified their offender as within their chain of command, the report found, while half of victims said they decided not to report the attack because they believed there would be no response.

On Thursday, Pentagon officials admitted that the new measures were necessary in order to restore the trust of service members.

“Frankly, we want increased unrestricted reporting and we can only get that if we can work with the trust of the victim,” Lieutenant General Curtis Scaparrotti, director of the Joint Staff, told reporters.

Yet he also noted that his office has been and will continue working “very closely” with Senator Gillibrand and other lawmakers, and suggested that additional changes could be on the horizon.

“We believe there’s merit in many of the legislative issues,” Scaparrotti said. “So we’re going to look at this and, frankly, if we believe we can make a difference in this problem set, we’ll look strongly at enacting other initiatives that perhaps aren’t in this group here today.”

Members of Congress, meanwhile, are clear that they will continue legislative pushes regardless of Pentagon actions.

“Today’s announcement has little bearing on the fact that Congress will soon mandate a host of historic reforms,” Senator Claire McCaskill, the sponsor of currently pending legislation on military assault, told IPS in a statement, “but it’s evidence that the Defence Department is now treating this problem with the seriousness that we expect, and that survivors deserve.”