WASHINGTON, Jan 24 2013 (IPS) - Following on a surprise announcement, U.S. Secretary of Defence Leon Panetta on Thursday confirmed that the U.S. military will be rolling back a nearly two-decade-old ban on women in the U.S. military serving in frontline combat positions. 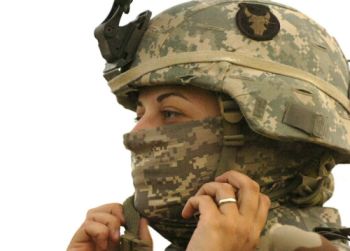 The number of sex assaults in the U.S. armed forces could be as high as 19,000 a year. Credit: Minnesota National Guard

“Women have shown great courage and sacrifice on and off the battlefield,” Panetta said. “The (Defence) Department’s goal in rescinding the rule is to ensure that the mission is met with the best-qualified and most capable people, regardless of gender.”

Since the 1994 ban went into effect, but particularly since the start of the war in 2001 in Afghanistan, critics have warned that the policy has made it more difficult for women to move up in the military ranks. Simultaneously, it misses out on the fact that female troops are already serving and dying in hazardous posts throughout U.S. combat operations.

“The military has long been a culture of misogyny. As long as military women did not have equal treatment from the top – the Pentagon – they were often treated as second class at best, sexual prey at worst,” Helen Benedict, author of “The Lonely Soldier: The Private War of Women Serving in Iraq” and a journalism professor at Columbia University, told IPS.

Speaking with Panetta at the public announcement on Thursday, General Martin Dempsey, the head of the Joint Chiefs of Staff, which spearheaded the new policy change, acknowledged that the U.S. military has an “ongoing issue with sexual harassment and sexual assault”.

“I believe that’s because we’ve had separate classes of military personnel,” Dempsey said. “When you have one part of the population that’s designated as warriors and another part that’s designated as something else, I think that disparity begins to establish a psychology that in some cases led to that environment.”

He continued: “I have to believe the more we can treat people equally, the more likely they are to treat each other equally.”

Thursday’s announcement has been widely lauded, with many calling the move long overdue.

Although the U.S. military continues to be made up predominantly of men, over the past two decades the number of women in the armed forces has risen steadily. Today, women constitute around 15 percent of all personnel in active service, some 1.4 million people.

Over the past decade-plus of war in Iraq and Afghanistan, more than 280,000 women have been deployed. And, according to the Defence Department, since 2001 at least 140 U.S. women soldiers have been killed and 865 have been wounded in those conflicts, in what analysts have repeatedly referred to as wars without frontlines.

“This is a tremendous victory for equality and justice in our military,” Anu Bhagwati, executive director of the Service Women’s Action Network (SWAN) and a former
Marine Corps captain, said in a statement. “Women’s service in Iraq and Afghanistan set the stage for this – the policy on the books simply did not reflect the reality of women’s service.”

Bhagwati also noted the importance of a recent lawsuit brought by SWAN and the American Civil Liberties Union (ACLU) in putting pressure on the Pentagon.

According to the lawsuit, the ban on women in combat positions “categorically excludes (women) from more than 200,000 positions, as well as from entire career fields. Consequently, commanders are stymied in their ability to mobilize their troops effectively.”

The ACLU also warned that servicewomen were being “denied training and recognition for their service, put at a disadvantage for promotions, and prevented from competing for positions for which they have demonstrated their suitability and from advancing in rank”.

The United States lags behind many other Western countries in terms of allowing women in combat rolls. A British government report from 2009 called out only the U.S., U.K. and Australia as continuing to maintain exclusion policies on women.

Importantly, Thursday’s announcement comes following a broad review at the highest levels of the military, indicating that the top brass is in general support of the changes. (Secretary Panetta is a civilian appointed by President Obama, who on Thursday stated his “strong support” for the policy change.)

Thursday’s decision comes after the military weakened the ban slightly last year, opening up 14,000 additional positions to women. It also follows the recent repeal of the controversial Don’t Ask, Don’t Tell legislation that had disallowed gay and lesbian soldiers from disclosing their sexuality.

“Just as the lifting of Don’t Ask, Don’t Tell removed official permission to bully and persecute gays and lesbians,” Helen Benedict told IPS, “so will the lifting of the ban on women in ground combat help to ameliorate the disrespect with which they have so long been regarded.”

Still, the move has received some criticism, both from some Republican members of the U.S. Congress and from certain analysts worried about issues of privacy and how well men and women can work together in frontline situations.

On Monday, a group called the Center for Military Readiness released a lengthy report warning that the “Liberal media and feminists are trying to use the military as a laboratory for the testing of a controversial twentieth-century social science theory – that men and women are interchangeable in all roles, and any differences that do exist are primarily, if not exclusively, due to socialization.”

Although Thursday’s announcement indicates clear intention, it does allow for a significant period for potential tweaking. Panetta is requiring military heads to get back to him with implementation plans by May, and they will have until 2016 to make final recommendations.