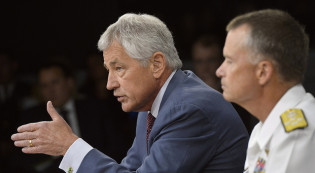 By Lucy Westcott
The United States military, an organisation that consumes 90 percent of the country's federal oil allowance, is trying to become a greener institution.

By Carey L. Biron
The new U.S. secretary of defence, Chuck Hagel, pushed Monday for reforms of the armed forces’ judicial code that would roll back an archaic provision allowing high-ranking commanders to overturn military court verdicts, a move that would particularly impact on cases involving sexual assaults.
ADVERTISEMENT ADVERTISEMENT