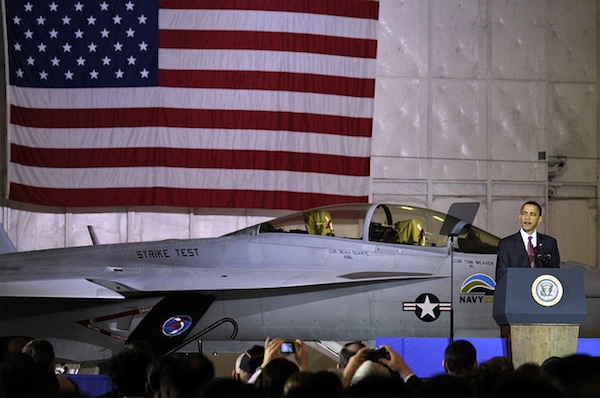 UNITED NATIONS, Jul 5 2013 (IPS) - The United States military, an organisation that consumes 90 percent of the country’s federal oil allowance, is trying to become a greener institution.

The U.S. Navy has said that by 2016 it will run one of its 11 carrier strike groups using biofuel. In a test run of the new approach in the Pacific Ocean, a novel mixture of jet fuel, algae and cooking grease powered FA-18 Super Hornets, a type of fighter aircraft.

Within a decade, half of the Air Force and Navy’s fuel needs will be met by alternative energy sources, according to Christopher Merrill, director of the International Writer’s Program at the University of Iowa.

Merrill, who penned an essay for Orion Magazine titled ‘The Future of War‘, suggested that with climate change posing an increasing threat to U.S. national security, another name for this pioneering strike group could be the Great Green Fleet.

"I view this as somebody trying to...figure out what (we) are going to have to do to defend the country."
-- Christopher Merrill

The military also believes that the threat of climate change to U.S. security is not simply a temporary trend, Merrill said.

“I don’t view this as a one-off thing, I view this as somebody trying to look into the future, trying to figure out what (we) are going to have to do to defend the country,” Merrill said.

In 2010, the Department of Defence recognised in its Quadrennial Defence Review (QDR) that climate change and energy will both play “significant roles in the future security environment”.

The military’s look towards a more sustainable future was confirmed by a report released by the Executive Office of the President last month, which affirmed U.S. President Barack Obama’s commitment to lower U.S. greenhouse gas emissions by 17 percent of 2005 levels by 2020.

The report rendered the effect of climate disasters difficult to ignore: last year was the second most expensive year on record for the United States, with 11 weather-related natural disasters costing over 110 billion dollars in damages.

Marcus King, associate research professor of international affairs at the George Washington University, believes that threats from climate change would affect not only the United States through phenomena such as sea-level rise and droughts but the rest of the world as well.

The United States ought to be concerned that other nations, including U.S. allies, “could be constrained because they don’t have (the) adaptive capacity (to deal with climate change),” King told IPS.

Some, such as journalist Thomas Friedman, believe that issues around food security in Syria were the catalyst for the uprising there that began two years ago. And as climate change causes more humanitarian crises, the U.S. Navy will continue to assist in disaster relief and recovery, King pointed out.

“Once you look at global climate change as a threat, Africa has the least resistance…(and) it’s of strategic importance to the U.S.,” King said.

The Department of Defence recognised the potential increase in the Navy’s response to disasters abroad, reporting in the QDR that climate change is one factor “whose complex interplay may spark or exacerbate future conflicts”, along with cultural tensions and new strains of diseases.

But Leah Bolger, formerly with the U.S. Navy and now a peace activist, believes the green move to be more a publicity stunt than a progressive statement signalling changing times.

Now, however, Bolger called the Navy’s decision to make one carrier strike group green by 2016 “laughable”.

“(The green move is) like a page out of a PR book – something they can put out in their public affairs office to say, ‘We’re so mindful of the environment,'” Bolger said.

Still, one additional advantage of the green move is that the potential demand for alternative fuels could create a new market, Merrill told IPS. Already tax credits are being granted to wind farms, according to him.

“Once that market gets established, it’s likely that you’ll see the kind of innovations that came in the wake of the invention of the Internet,” he predicted.

Nevertheless, a change in the military’s energy consumption doesn’t necessarily mean a change in the behaviour of Americans, who consumed 19 percent of the world’s total energy resources in 2010, according to data from the U.S. Energy Information Administration, despite comprising around five percent of the global population.

Even if Americans knew about the Great Green Fleet, Bolger said, it wouldn’t do much to change their habits.

While the Great Green Fleet doesn’t necessarily improve the operational abilities of the Navy, the impetus is noble, King said. “If they have the ability to create demand (for alternative fuels)… I think that’s great, as long as it’s consistent with national security, which it is.”