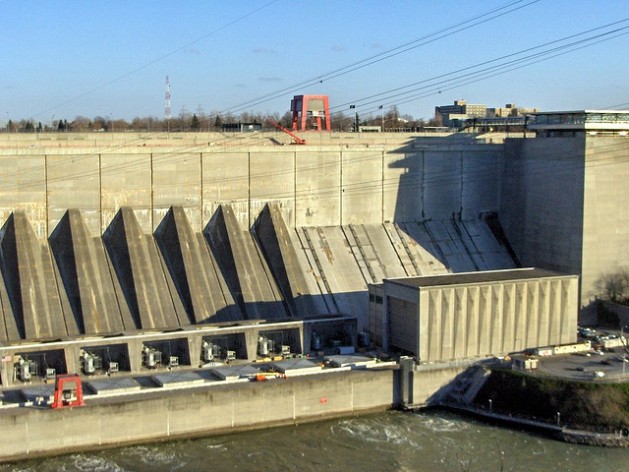 Hydroelectric installations, like this one on the Niagara River, remain the largest source of clean energy in the United States and the U.S. South. Credit: B. Gilliard/cc by 2.0

ATLANTA, Georgia, Oct 29 2012 (IPS) - With the U.S. East Coast virtually shutting down Monday with the arrival of Hurricane Sandy, the broader debate over transitioning to cleaner energy sources and slowing, if not halting, climate change is taking on ever greater urgency.

While some parts of the U.S. have been made significant strides towards such a shift, the south has generally lagged behind. That remains the case, but recent signs suggest that utility companies and even Republican officials are beginning to change their tune.

If approved, this will mean that altogether, solar power will make up one percent of Georgia’s total energy portfolio.

Meanwhile, Alabama Power just announced that it is making a considerable investment in wind energy. It will purchase 404 megawatts of electricity generated at wind farms in Kansas and Oklahoma, one of which will be completed this year and another that is expected to come on line in 2014.

This is the equivalent of three percent of the company’s total energy portfolio. Alabama Power services all but the northern one-third of Alabama, which is serviced by the Tennessee Valley Authority (TVA).

Georgia Power uses other types of renewable energy in its total energy mix, including hydroelectric, biomass, and landfill gas.

“We’re always looking for better, environmentally friendly ways that we can provide energy to meet demand for our customers that also makes economic sense,” Michael Sznajderman, a spokesperson for Alabama Power, told IPS.

“We’re purchasing this energy at what we call below avoided cost, at a price that’s below the price that we can produce power ourselves. What that means is, we can use this energy – because it’s wind and it’s erratic, it’s only available when the wind’s blowing – we can use it to supplant some other energy that we would produce here or purchase that’s at a higher price. It made economic sense for us, that’s the primary driver for us,” Sznajderman said.

Alabama is the only state in the U.S. South to stand among the top 10 states in the country in terms of annual production of renewable energy, according to a recent report by the U.S. Energy Information Administration (EIA).

The U.S. state that produces the most renewable energy each year is Washington with 74.9 GW.

California has the second greatest with 58.8 GW.

Mostly, Alabama’s high ranking is due to its use of hydroelectric power, which makes up seven to 10 percent of Alabama Power’s energy mix; and some biomass.

A little over 14 percent of the total energy mix in the U.S. derived from renewable sources like solar, wind, hydroelectric power, and biofuels in 2011, according to the EIA. The other 86 percent comes from fossil fuels like coal, as well as nuclear power, pumped storage, and other sources.

By comparison, other nations have made much greater strides towards solar power, with Germany having launched a 100,000 Roofs Programme, which put solar panels on the roofs of 100,000 homes between 1991 and 2004; and with Japan on target to have solar panels on 30 percent of its homes by 2030.

Another ranking of states in terms of clean energy is the U.S. Clean Energy Leadership Index. This ranking is based on prevalence of green technology; human, financial, and intellectual capital; and policies providing regulation and incentives to promote clean energy, across all 50 U.S. states.

Not a single state in the U.S. South is on the list. In fact, Georgia rates 34th and Alabama rates 46th.

Asked what is the major obstacle to promoting renewable energy in the U.S. South, Stephanie Benfield, executive director of GreenLaw and a former member of the Georgia House of Representatives, pointed to the utility companies.

“Georgia Power clings to coal and nuclear, and they are the 800-pound gorilla in the room. Georgia Power controls the majority of electric supply in Georgia and in our region. They are a regional player… they have incredible influence over national policy as well,” Benfield told IPS.

“Georgia Power is reluctant to change. Nuclear and coal has been the base of their power for decades,” she said.

According to Sznajderman, the low price of non-green power in this area of the country has also made green power less attractive compared to places like California, where for various reasons, non-green power costs are higher.

“We have drawbacks too, typically Alabama doesn’t have commercial grade wind. There’s limited ability to do wind here, but that’s why we’re buying it from the Great Plains. Same thing with solar,” he said.

“One other reason I will tell you from our perspective is, our position has been, in some other areas of the country, they have made a policy decision, by the Public Service Commission or Legislature, to subsidize renewables, to spread the cost across their customer base… so customers pay for it whether they want it or not,” Sznajderman said.

“We’re opposed to any forced subsidy, we offer a renewable energy rate,” Sznajderman said, noting that Alabama Power customers who wish to pay more for renewable energy may choose to do so.

Thirty 30 U.S. states and the District of Columbia had enforceable Renewable Performance Standards or other mandated renewable capacity policies as of January 2012, according to the EIA. In addition, seven U.S. states have voluntary goals for renewable generation.

The majority of remaining U.S. states with no renewable energy target, whether voluntary or mandatory, are strikingly clustered in the U.S. South.