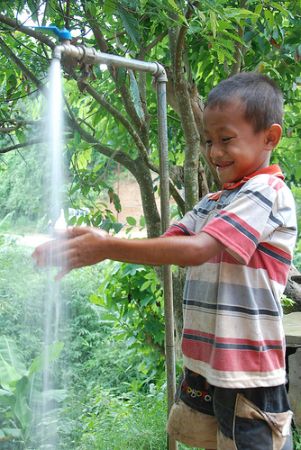 Piped water has made life easier for this Laotian boy, who no longer has to help his parents fetch water from afar. Credit:Vannaphone Sitthirath/IPS

Civil society groups are expressing excitement over the scope and strength of the new strategy, dubbing it a “major advance”. But many are also calling on lawmakers to ensure that, during the coming implementation phase, U.S. aid is targeted primarily at the poorest communities in developing and middle-income countries.

“Achieving water security for regions, nations, and individuals is one of the greatest development challenges confronting the world today,” the new Water and Development Strategy, released Tuesday by USAID, the country’s main foreign aid arm, states. “By its nature, as a basic and essential resource, water considerations cut across nearly every aspect of USAID programming.”

Yet because of this cross-cutting nature – the new document covers both the human and agricultural uses of water – the new strategy was a very long time coming, requiring input and agreement from a vast number of government agencies and stakeholders.

“It is kind of astounding that this is the U.S. government’s first such strategy, though it is something that many groups have long been advocating for,” Alanna Imbach, media officer with WaterAid America, a global advocacy and implementing group, told IPS.

“For many years in development work, water, sanitation and hygiene have been a bit forgotten. Instead, significant focus has been placed on education, maternal health and nutrition, overlooking the fact that water and sanitation are foundational building blocks for all of those other elements. So it’s now urgent that we get this right first and then the others will fall into place.”

Indeed, the ongoing impact of these issues remains incredibly wide. According to the United Nations, in developing countries, around 2,000 children are estimated to die every day from water-borne diseases, overwhelmingly from diarrhoea due to bad drinking water, poor sanitation and inadequate hygiene.

Every year, around 2.5 billion such cases are recorded among young children alone, and the knock-on effects are vast.

“We know that every dollar we invest in clean water and basic sanitation yields eight dollars in benefits,” Dick Durbin, a U.S. senator who has championed related legislation, said Tuesday at the public unveiling of the new strategy. “People are healthier, kids stay in school, food is safer, AIDS drugs and other critical health treatments are able to work.”

In fact, international recognition of this centrality has led to some initial global success: the Millennium Development Goal (MDG) to halve the proportion of those without access to clean drinking water was met in 2010, five years early.

Yet another MDG to similarly cut the number of those without access to basic sanitation remains outstanding, and the United Nations says the world will not likely achieve this goal by 2015. According to USAID, some 40 percent of the world continues to use unsafe toilets – when they have toilets at all.

Advocates say it is critical that the new USAID strategy will attempt simultaneously to tackle both water and sanitation-related issues. Setting out a plan for the next five years, the aim is to provide at least 10 million people with “sustainable access” to an improved water supply and six million people with access to improved sanitation during that period.

Notably, the plan puts into action new USAID guidance to emphasise local ownership and sustainability of U.S.-funded aid projects, while offering greatly expanded flexibility on how that funding is to be used.

“What’s great about this strategy is that it opens up space for creative programming in water development,” Ned Breslin, CEO of Water For People, a humanitarian group, told IPS. “It’s a huge step forward.”

The United States already has in place one piece of legislation requiring that water and sanitation be a central priority for U.S. foreign funding, known as the Water for the Poor Act, passed in 2005. Further, that law also requires that water and sanitation-related aid be centred on countries that have the least access to those services, with the aim of having the greatest possible impact on other development goals.

Yet policymakers have never followed up to define an implementation plan for this goal, as mandated by the Water for the Poor Act. And while the new USAID strategy is not that implementation plan, observers are now planning to push lawmakers to ensure that the new strategy is closely aligned with the objectives of the 2005 legislation.

Indeed, the strategy itself stipulates that USAID will advance programmes “consistent” with that law, “including establishing criteria to designate high priority countries for increased investments”.

Yet much of the language in the strategy also contextualises water within a fast-strengthening narrative of national security, in line with a major report last year from the U.S. intelligence community that identified water security as a primary threat to U.S. interests in coming decades.

As such, the strategy mandates focusing new water and sanitation emphasis on countries for three reasons, one of which is “strategic considerations”.

“My concern is what the balance is going to be here – I’d like to see the vast majority of these funds going to countries and communities where water and sanitation access levels are under 75 percent, rather than to those countries where significant access already exists,” John Oldfield, CEO of WASH Advocates, a Washington advocacy group on issues of water and sanitation, told IPS.

“Plus, you can’t forget about the poor communities in middle-income countries. The new strategy can be very pro-poor, depending on how one interprets it, but these are issues on which we need to continue to work with USAID.”

WaterAid’s Imbach has similar concerns, warning that the strategy currently allows for a “fair proportion of funds” to go to countries of strategic importance. She says her office is now looking to Congressional leaders to ensure accountability to the poor.

One such opportunity could be quickly approaching, with lawmakers preparing to re-introduce a bill called the Water for the World Act, an earlier version of which was defeated in 2010. That legislation would “offer an opportunity to ensure that those most in need are benefiting from U.S.-funded water and sanitation funding,” Imbach says.

The Water for the World Act could be re-introduced as early as next month.