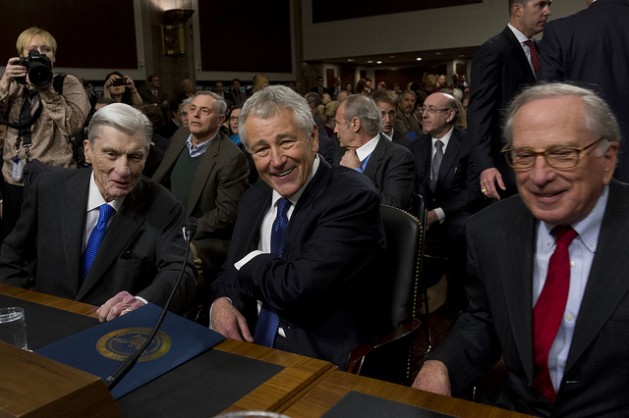 The confirmation, which followed a more-lopsided 71-27 vote to end a Republican-led filibuster against the decorated Vietnam War veteran, broke mainly along party lines, with four Republican senators joining the 52 Democrats and two independents in the chambre in voting to approve the nomination.

The vote marked a major defeat for hard-line neo-conservatives, notably the Emergency Committee for Israel (ECI) and its chairman, Republican operative Bill Kristol, whose “Weekly Standard” magazine and website published a constant stream of charges against the former Nebraska senator, ranging from anti-Semitism to deep hostility toward Israel, since word that Hagel was Obama’s preferred candidate for the post in mid-December.

It was an unprecedented, multi-million-dollar effort to defeat a cabinet nominee that included expensive, full-page, 11th-hour ads in the Wall Street Journal – whose editorial page also featured a series of attacks on Hagel – and other publications, as well as anti-Hagel TV spots in key states.

ECI and several other well-funded “astro-turf” groups tried first to pre-empt the nomination, which came in January, and then to derail it by promoting a filibuster by Republicans and persuading – albeit unsuccessfully — key Democratic senators considered susceptible to pressure by more-mainstream Israel lobby groups to defect.

In grueling eight-hour testimony late last month, as well as one-on-one meetings with senators, however, Hagel, who served in the Senate from 1997 to 2009, reassured doubters that he was both a strong supporter of Israel’s security and, despite a number of previous public statements suggesting that military action against Iran’s nuclear facilities would be grave mistake, he would indeed recommend such a course of action if all diplomatic efforts to curb Tehran’s nuclear programme fell short.

In a statement issued after the vote, Kristol in insisted that ECI was “proud” of its role during the confirmation battle, adding that, “We are heartened that that the overwhelming majority of senators from one of the major parties voted against confirming Mr. Hagel.

“We take some comfort in Mr. Hagel’s confirmation conversions on the issues of Israel and Iran, and do believe that, as a result of this battle, Mr. Hagel will be less free to pursue dangerous policies at the Defense Department and less inclined to advocate them within the administration,” he added.

Yet to be confirmed is Obama’s choice for director of the Central Intelligence Agency (CIA), John Brennan, the top counter-terrorism official in the White House during most of Obama’s first term.

While Hagel is the only Republican among the top national-security officials, he is widely seen as generally sharing their worldview on key foreign-policy and defence issues – notably, the desirability of maintaining a “light military footprint”, especially in the Middle East; “engaging” actual and potential geo-political foes through diplomacy; using military power only as a last resort; and relying more on multilateral institutions, such as the U.N. and NATO, and regional actors, to address key crisis situations, sometimes derisively referred to by neo-conservatives and other hawks as “leading from behind”.

One basic tenet of their beliefs was expressed by former Pentagon chief Robert Gates two years ago when he told Army cadets: “Any future defence secretary who advises the president to again send a big American land army into Asia or into the Middle East or Africa should ‘have his head examined,’ as Gen. (Douglas) MacCarthur so delicately put it.”

As Vietnam veterans who came to believe that the war in Indochina was a major strategic error – as well as a waste of U.S. blood and treasure – Hagel and Kerry are regarded as particularly sceptical of the effectiveness of military action and of “nation-building” and counter-insurgency strategy – a scepticism also shared by Biden, whose influence on foreign policy is seen as having risen over the past two years.

Indeed, in a column published over the weekend, foreign-policy insider par excellence, David Ignatius, warned that Obama’s second-term team is so unified in their general foreign-policy outlook that Obama “is perilously close to groupthink”.

While both Kerry, who hails from the liberal-international wing of the Democratic Party, and Hagel, who is close to the rapidly disappearing “realist” wing of the Republican Party (of which Gates was also a part), both voted in 2002 to give George W. Bush the authority to go to war in Iraq, they did so with considerable reservations at the time and, within a year of the invasion, began criticising what Obama himself called a “dumb” war.

Hagel’s criticism of the Iraq war – as well as his neutrality in the 2008 race between Obama and Republican Sen. John McCain – has been cited as a major reason why most Republicans opposed his nomination, although not to the extent of supporting an indefinite filibuster against it.

But most political analysts here believe most Republican senators would have gone along with the nomination – as is customary for most presidential cabinet appointees – had the neo-conservatives and their funders, as well as elements of the more-mainstream Israel lobby, not mounted such a vigorous and expensive effort to defeat him.

Unlike most members of Congress, for whom the influence of the Israel lobby looms very large, Hagel spoke out publicly about what he believed were Israel’s poor treatment of Palestinians, the urgent necessity of a two-state solution, the importance of engaging Hamas in a peace process, and the potentially catastrophic dangers of an Israeli or U.S. military attack on Iran.

In at least one interview, he also spoke out against the “intimidate(ing)” influence of what he called the “Jewish lobby” – a phrase for which he was later accused of anti-semitism, and for which he subsequently apologised. (A major component of the Israel lobby consists of evangelical Christians, a core Republican constituency.)

Indeed, during his grueling and less-than-impressive eight-hour confirmation hearing, Republicans focused their questioning almost exclusively on his views regarding Israel and Iran.

The questioning was so Israel-centred that the popular satirical weekly television programme, Saturday Night Live, even devoted a skit broadcast over the web depicting Hagel’s Republican inquisitors competing to avow their devotion to the Jewish state.

But whether Hagel will indeed play a key role in determining U.S. policy toward Israel remains to be seen. For now, the much bigger challenge he faces is the implications of the so-called budget sequestration that appears certain to take effect Mar. 1 and as a result of which the Pentagon could face as much as 600 billion dollars in cuts to its budget over the next 10 years in addition to the almost-500 billion dollars in cuts that have already been mandated.

Ironically, the impact of the sequestration on the Pentagon’s budget is also seen as potentially disastrous to the neo-conservatives who opposed Hagel.

Given their strong conviction that Israeli security and global stability rests primarily on U.S. military power, they have spoken out strongly against growing Republican complacency about the effects of sequestration on the Pentagon, fearing that it heralds a resurgence of isolationist sentiment in the party. But instead of focusing primarily on rallying Republicans to compromise with Obama on the budget, they spent significantly more time and resources on defeating Hagel.