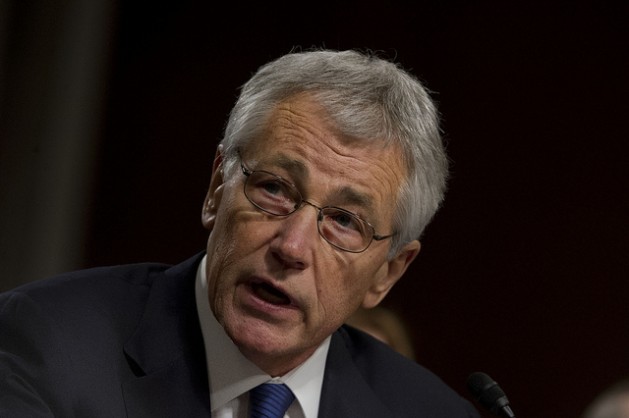 Senator Charles T. Hagel answers a question at his Jan. 31, 2013 confirmation hearing. If confirmed, Hagel will become the 24th Secretary of Defense. DoD Photo by Erin A. Kirk-Cuomo

WASHINGTON, Feb 22 2013 (IPS) - Despite an appeal Thursday by 15 right-wing Republican senators for President Barack Obama to withdraw the nomination of Chuck Hagel as his next defence secretary, the former Republican senator from Nebraska appears virtually certain to be confirmed as Pentagon chief by the full Senate next week.

The fact that his arch-foes – almost all of them from staunchly “red” U.S. states in the South and Rocky Mountain West – were able to get only 15 out of the 40 Republicans who used a filibuster threat to prevent a confirmation vote last week suggested that the anti-Hagel campaign, launched with a bang of anti-semitism accusations more than two months ago, is ending with more of a whimper.

Indeed, Thursday’s announcement by Alabama Republican Sen. Richard Shelby, a senior member of the crucial defence appropriations subcommittee, that he will vote to confirm Hagel delivered a major blow to his foes.

With two other Republican senators already pledged to vote “aye” and more than half a dozen other Republicans, including Sen. John McCain, who have promised not to delay a final vote any longer, it appears all but certain that Hagel will be confirmed with a healthy majority of as least 58 votes in the 100-seat chamber.

Hagel’s enemies, led by hard-line neo-conservatives whose political views are close to those of Israel’s Likud Party, had hoped that the 11-day hiatus between last week’s threatened filibuster and the scheduled vote next Tuesday would bring to light new evidence – specifically, that he was insufficiently hostile to Iran or overly critical of Israel — that, in their eyes, would disqualify him from running the U.S. military.

That effort, however, has so far come up short. Apart from a fraudulent rumour that he had once spoken before a non-existent “Friends of Hamas” organisation, the only “new” evidence they were able to find was that Hagel had once warned Israel risked becoming an “apartheid state” – something that at least two Israeli prime ministers have also recently warned about — if it did not settle with the Palestinians.

They also found that he may once have complained that the State Department sometimes acts as if it were an “adjunct of the Israeli foreign ministry”, an assessment shared by several former senior U.S. diplomats who have worked on the Israel-Palestinian issue.

While both statements were cited by neo-conservatives as proof that Hagel hated Israel, and even a couple of mainstream Jewish organisations – the American Jewish Committee and the Anti-Defamation League – suggested such remarks bore further scrutiny, they didn’t get much traction.

In any event, they don’t appear to have had had their intended effect: to peel off one or two key pro-Israel – preferably Jewish — Democrats who have so far stuck with Obama’s choice despite their discomfort with Hagel’s Republican affiliation and his view that U.S. and Israeli interests are not always one and the same.

New York Sen. Charles Schumer has been a particular target of the neo-conservative campaign, but he re-affirmed his support for the decorated Vietnam veteran Wednesday, much to the disgust of William Kristol’s Weekly Standard, Commentary magazine’s Contentions blog, and Washington Post blogger Jennifer Rubin, all of whom have played key roles in trying to rally opposition to the nomination.

In their letter to Obama, the 15 senators, who included the ranking Republican on the Senate Armed Services Committee, James Inhofe, as well as a senior party foreign-policy spokesman, Lindsay Graham, and rising stars Marco Rubio and Ted Cruz (whose McCarthyesque interrogation of Hagel during his confirmation hearing drew rebukes from party elders, including McCain), argued that the likelihood that Hagel will only get a handful of Republican votes should disqualify him.

“It would be unprecedented for a Secretary of Defense to take office without the broad base of bipartisan support and confidence needed to serve effectively in this critical position,” they wrote. “…(I)n the history of this position, none has ever been confirmed with more than 11 opposing votes. The occupant of this critical office should be someone whose candidacy is neither controversial nor divisive.”

On more substantive issues, they complained that Hagel has “proclaimed the legitimacy of the current regime in Tehran, which has violently repressed its own citizens, rigged recent elections, provided material support for terrorism, and denied the Holocaust.

“Any sound strategy on Iran must be underpinned by the highly credible threat of U.S. military force (to attack Tehran’s nuclear facilities),” they argued. “If Senator Hagel becomes Secretary of Defense, the military option will have near zero credibility. This sends a dangerous message to the regime in Tehran, as it seeks to obtain the means necessary to harm both the United States and Israel.”

The letter’s focus on both Israel and the alleged threat posed to it by Iran – the same issues that overwhelmingly dominated Hagel’s confirmation hearing last month – reflected the degree to which defence of the Jewish state has become a litmus test for core Republican constituencies in the Rocky Mountain states and the so-called “Bible Belt” that stretches from Texas and Oklahoma to the southeastern Atlantic seaboard.

Christian Zionists, who play an out-sized role in Republican primary campaigns, are especially strong and politically engaged in these states.

Indeed, Rubio, who gave the official Republican reply to Obama’s State of the Union address last week, departed immediately afterward for a visit to Israel.

“Any Republican candidate wants to plant his flag in Israel, not just in Iowa and New Hampshire (early primary election states),” Larry Sabato, a political analyst at the University of Virginia, told the Washington Times. “Christian conservatives are a big chunk of (Republican) primary voters in a large majority of states, and they care about Israel as much as Jewish Americans do.”

Indeed, Lindsay Graham, normally seen as a relative moderate in the party, has been particularly harsh in attacking Hagel, due reportedly in important part to pre-empt a challenge next year by a more right-wing candidate in his state of South Carolina.

Israel’s centrality for the red-state Republicans in the debate over Hagel is particularly remarkable given the extraordinarily strong support his nomination has received from virtually every veteran’s group in the country.

In a highly unusual statement last month, the traditionally hawkish, but officially non-partisan Veterans of Foreign Wars (VFW) called Hagel “uniquely qualified to lead the Department of Defense”. Veterans groups have historically been a key Republican constituency, especially in the South.

Former Republican presidential candidate Bob Dole, who was himself badly wounded in World War II and has long been a favourite of the VFW and other veterans’ groups, used similar language in endorsing Hagel’s nomination here Thursday.

According to some analysts, the senators who have been most outspoken in opposing Hagel, especially those from Texas, Oklahoma, and other states with a disproportionate number of big military bases and defence-manufacturing facilities, may yet regret their stance, particularly in light of the anticipated defence cuts caused by the so-called sequestration.

“While Hagel had to play defense during the (confirmation) hearing, that will change when he gets to the Pentagon,” noted former senior Ronald Reagan defence official Lawrence Korb and Lauren Linde in an article on foreignpolicy.com this week.

“Based upon his past experiences in business, the non-profit world, and the Senate, he will be a take-charge leader, and one of his challenges will be reducing defense spending. And his choices could hurt the constituents of the very officials who have done the most to hurt him.”

Indeed, that may help to explain Shelby’s decision to vote for Hagel’s nomination, according to Joel Rubin, a Capitol Hill veteran at the Ploughshares Fund.

“Shelby seems to be making a very pragmatic choice about wanting to have a relationship with the new defense secretary in this era of tightening budgets – budgets that could also potentially affect projects back at home.”