Kerry Gets a Pass as Factions Gear Up for Hagel Fight

WASHINGTON, Jan 24 2013 (IPS) - Sen. John Kerry received a warm reception from his colleagues on both sides of the aisle during his confirmation hearing before the Senate Foreign Relations Committee here Thursday, virtually assuring his approval as President Barack Obama’s second-term secretary of state as soon as next week. 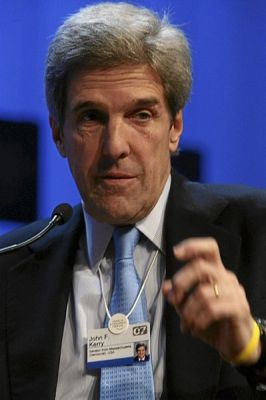 Kerry rated Iran’s nuclear programme at the top of a list of “immediate, dangerous challenges”. Credit: WEF/cc by 2.0

“My sense is your confirmation will go very, very quickly,” Sen. Bob Corker, the right-wing ranking Republican on the Senate Foreign Relations Committee, told the nominee at the outset of a four-hour hearing in which Kerry defended the administration’s existing policies, ranging from the “Arab Spring” to Obama’s “reset” with Russia and the administration’s “pivot” to the Asia/Pacific.

Kerry, who will replace Hillary Clinton, is the first and least controversial of the three key nominees to top foreign-policy posts in Obama’s second term.

Indeed, the goodwill directed toward Kerry at Thursday’s hearing will likely mark a sharp contrast to the reception Republicans are expected to accord Hagel when his confirmation hearings begin before the Senate Armed Services Committee late next week.

While Hagel, himself a former Republican senator from Nebraska, is currently expected to win confirmation, his nomination has provoked vocal opposition, particularly among neo-conservatives and those Republicans committed to a staunchly pro-Israel foreign policy.

Indeed, Corker himself has already voiced strong reservations about Hagel, while another half a dozen senators have committed themselves to vote no, accusing the nominee of being insufficiently supportive of Israel’s right-wing government and too dovish toward Iran.

Hagel, however, has spent much of the time since his formal nomination two weeks ago reassuring senators, as well as leaders of various Jewish organisations that have also expressed concerns, that his views on both Israel and Iran are identical to those of Obama himself.

He appears to have made important headway, initially gaining the blessing of New York Democratic Sen. Charles Schumer, who is closely allied with the Israel lobby, and subsequently in holding a “frank and candid” conversation “between friends” with one of his most influential Republican critics, Sen. John McCain.

More important, however, it appears that a pre-nomination campaign against Hagel by prominent neo-conservatives, who, among other charges, accused the prospective nominee of anti-Semitism, provoked a strong backlash from former top Republican and Democratic national-security officials who published letters – both in support of Hagel and denouncing the tactics of his foes.

Once Obama formally nominated him, leaders of mainstream Jewish organisations, some of whom had initially joined the neo-conservative campaign, declared their neutrality.

Moreover, the poor performance by the right-wing coalition of Prime Minister Benjamin Netanyahu, who is closely allied to the neo-conservatives opposed to Hagel, in the Israeli elections Monday may also reduce resistance to his nomination among right-wing forces here.

Brennan is also expected to encounter flak, although, in his case, it may be bipartisan.

Republicans have accused him of selectively leaking classified information, including about the successful hunt for Al-Qaeda chief Osama bin Laden, to the news media as the White House’s head of counter-terrorism during Obama’s first term.

Some Democrats, as well as a handful of Republicans, notably McCain, have also expressed concern that Brennan, previously a career CIA official, went along with the Bush administration’s “enhanced interrogation” techniques against suspected terrorists that human-rights groups have denounced as torture.

While Brennan, who also played a key role in the escalation of drone strikes in Pakistan and Yemen over the past four years, denied that he supported enhanced interrogation, the charges about his role under Bush persuaded him to withdraw his name when Obama considered nominating him to the CIA post in 2009.

In his testimony Thursday, Kerry broke no new policy ground, stressing instead the necessity for both parties to work together both in getting Washington’s fiscal house in order and in providing resources necessary to back up policy commitments.

In his prepared remarks, he suggested that the country risked losing its “indispensable” status if it could not show “people in the rest of the world that we can get our business done in an effective and timely way.”

Elaborating on Obama’s desire to end more than decade of war, he also stressed the importance that “American foreign policy is not defined by drones and deployment alone. We cannot allow the extraordinary good that we do to save and change lives to be eclipsed entirely by the role that we have had to play since September 11th, a role that was thrust upon us,” he added.

He rated Iran’s nuclear programme at the top of a list of “immediate, dangerous challenges”, repeating the administration’s position that “we will do what we must do to prevent Iran from obtaining a nuclear weapon.”

He suggested that the U.S. would be satisfied if Tehran “proves” its programme is peaceful and subjects it to “intrusive inspections” but failed to say under what circumstances Washington would ease sanctions aimed at “crippling” Iran’s economy.

Given the uncertainty surrounding any new Israeli government emerging from this week’s elections, Kerry said his “prayer is that …perhaps this can be a moment to renew” discussions between Israel and the Palestinians.

“…If we can’t be successful, the door, window, whatever you want to call it, to the possibility of a two-state solution could shut on everybody and that would be disastrous in my judgment,” he noted, adding that many of the problems faced by the U.S. throughout the larger region was linked to that conflict.

“(S)o much of what we aspire to achieve and what we need to do globally, what we need to do in the Maghreb and South Asia, South Central Asia, throughout the Gulf – all of this is tied to what can or doesn’t happen with respect to Israel-Palestine,” he said, echoing past assertions by Hagel of the kind to which neo-conservatives and the Israel lobby have taken strong exception.

He also pledged several times to sustain Clinton’s efforts to put women’s rights at the forefront of U.S. policy, especially in Afghanistan, and defended continued co-operation with Pakistan despite its sheltering of the Taliban.

The strongest challenges to his testimony came from McCain urged him to press for greater U.S. support for rebels in Syria – and who also endorsed his nomination “without reservation” — and from rising Republican star Sen. Marco Rubio, who, in a broader critique of Obama’s policies, particularly in the Arab world, suggested that the administration had not been sufficiently assertive in promoting U.S. interests and values.

In each case, Kerry, who had himself carried out informal diplomatic missions for the administration as chairman of the Foreign Relations Committee, defended Obama’s performance, politely objecting at one point to the notion that a more forceful U.S. role in the Libyan rebellion that ousted Muammar Gadhafi would have produced a more stable government.

“We need to be sort of thoughtful about the history and the culture and the nature of the places that we’re dealing with,” Kerry said. “And you can’t just take an American concept and plunk it down …and say, ‘This is going to work.’”