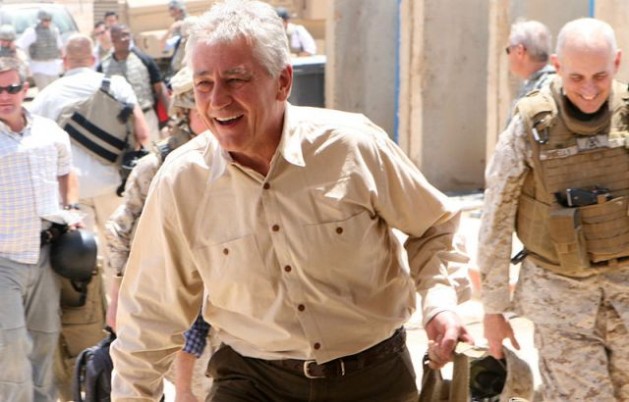 WASHINGTON, Dec 19 2012 (IPS) - Neo-conservatives and leaders of the powerful Israel lobby are mobilising their forces in what looks like an all-out campaign to pre-empt the nomination by President Barack Obama of an outspoken former Republican senator and decorated Vietnam War hero to replace Leon Panetta as secretary of defence.

The campaign was launched last week after senior White House officials leaked word that Chuck Hagel, who also co-chairs the President’s Foreign Intelligence Advisory Board (PFIAB), was likely to get the nomination whenever, as expected any time, Panetta formally announces his retirement.

It gathered steam in the last few days with prominent neo-cons leading the charge against the former Nebraska senator.

If Obama goes ahead with the nomination, it could signal a key shift in U.S. Middle East policy, if only because Hagel, a Republican realist in the tradition of former President Dwight Eisenhower and Secretary of State James Baker, has been a forthright critic of some of Israel’s policies and a consistent advocate of diplomatic engagement with Iran.

In fact, some observers would see his nomination as “payback” to Israeli Prime Minister Benjamin Netanyahu, who clashed repeatedly with Obama during his first term over Jewish settlement expansion in the West Bank and his repeated threats to attack Iran. Netanyahu also made little secret of his preference for Republican Gov. Mitt Romney in last month’s presidential election.

Indeed, fears among neo-conservatives and the more mainstream Israel lobby here that Obama intends to exert real pressure on Israel in his second term appear to be motivating the burgeoning campaign against Hagel’s possible nomination.

Their goal, therefore, is to convince Obama that he will pay an excessively high political cost if he goes through with Hagel’s nomination. If the nomination goes forward, most observers believe it will be very difficult to defeat given the reluctance many Senate Republicans would feel about rejecting one of their own (despite the fact that Hagel endorsed Obama for the presidency in 2008).

The main charge leveled so far against Hagel, who also chairs the influential Atlantic Council think tank, is that he is “anti-Israel” – some go so far as to call him “anti-Semitic” – and that he has repeatedly expressed scepticism about carrying out a military attack against Iran if it fails to bow to Western demands that it curb – or, preferably, in Israel’s view – abandon its nuclear programme.

“Hagel certainly does have anti-Israel, pro-appeasement-of-Iran bona fides,” wrote William Kristol, editor-in-chief of The Weekly Standard, in the magazine’s lead editorial this week.

“While still a senator, Hagel said that ‘a military strike against Iran, a military option, is not a viable, feasible, responsible option,’” noted Kristol, a co-founder of the neo-conservative Project for a New American Century (PNAC), which played a key role in beating the drums for war against Iraq one decade ago, and, more recently, the controversial Emergency Committee for Israel (ECI).

He was joined Tuesday by two other prominent neo-conservatives known for their strong support of Netanyahu’s right-wing Likud Party – Elliott Abrams, a fellow at the Council on Foreign Relations who served as George W. Bush’s top Middle East aide; and Bret Stephens, who writes the “Global View” column in the Wall Street Journal.

Noting that Hagel had once explained to a friendly interviewer that “the Jewish Lobby intimidates a lot of people up here (in Congress),” Stephens suggested that the use of that expression smelled of anti-Semitism, particularly in light of his criticisms of Israel during the second Palestinian intifada and its 2006 war in Lebanon, and his opposition to various sanctions imposed on Iran.

“…Mr. Hagel’s Jewish lobby remark, was well in keeping with the broader pattern of his thinking,” wrote Stephens, who went on to quote from an interview Hagel conducted with a retired U.S. Mideast diplomat in 2006, as alleged evidence of the former senator’s anti-Semitism or hostility to Israel.

While such a statement would appear uncontroversial on its face, Stephens’ charges were nonetheless echoed by Abraham Foxman, director of the Anti-Defamation League (ADL), a pillar of the more-conventional Israel lobby.

“His record relating to Israel and the U.S.-Israel relationship is, at best, disturbing, and, at worst, very troubling,” said Foxman who added that Hagel’s sentiments …about the Jewish lobby border on anti-Semitism.”

Still, Foxman, who, unlike the neo-conservatives, tries to remain scrupulously non-partisan, told The Times of Israel he would not oppose the nomination if it went forward.

The American Israel Public Affairs Committee (AIPAC), the most influential pro-Israel lobby group, has so far kept a discreet silence, although a former longstanding spokesman, Josh Block, who now heads The Israel Project, strongly denounced Hagel for his opposition to sanctions against Iran and his refusal to sign various letters and resolutions against Iran, Hezbollah, and Hamas that were favoured, if not drafted, by AIPAC.

In some ways, the latest campaign is reminiscent of that carried out against Chas Freeman, a highly decorated retired ambassador, who was appointed to chair the National Intelligence Council early in Obama’s administration, only to withdraw from consideration after an intense campaign by leading neo-conservatives and the Israel lobby oppose him.

In that case, however, they focused less on Freeman’s criticism of U.S. policy toward Israel than on his allegedly close ties to the Chinese leadership.

With Hagel, of course, the stakes would be much higher given the importance of the Pentagon in policy-making, particularly in the Middle East where Obama, consistent with Hagel’s own views, is trying hard to lighten the U.S. footprint in order to “pivot” U.S. military forces more towards the Asia/Pacific.

Also, unlike the Freedman case, Hagel’s foes will find it difficult to use other non-Mideast issues to mobilise opposition to his possible nomination. Frank Gaffney, head of the hardline neo-conservative Center for Security Policy (CSP), denounced Hagel in a Washington Times op-ed Tuesday for his early scepticism about the wars in Iraq and Afghanistan, his belief that the Pentagon was “bloated”, and his support, along with other Republican realists, for gradual nuclear disarmament.

Another emerging argument is that if, as expected, Obama nominates Sen. John Kerry as secretary of state, putting another older white male at the top in the Pentagon would defeat the president’s belief that his cabinet should be demographically diverse.

In the very short time since the Hagel controversy has erupted, a number of prominent Jewish voices have spoken in his support, including Miller who told the Daily Beast’s “Open Zion” blog, “Hagel is a strong supporter of Israel…”

In addition, former U.S. ambassador to Israel Dan Kurtzer told ‘Politico’ that the criticism directed against Hagel was “terribly misguided”, while the “pro-peace, pro-Israel” J Street lobby group said Hagel “would be an outstanding choice” to head the Pentagon.

Most observers believe much now depends on whether prominent senators closely tied to the Israel lobby on either side of the aisle speak out against Hagel.

So far, Republican Senators McCain and Lindsay Graham, whose views generally reflect those of the neo-conservatives and who played a key role in rallying opposition to Obama’s possible nomination as secretary of state U.N. Ambassador Susan Rice, have promised to grill Hagel on his “Jewish lobby” remarks if he is nominated but have not said they would necessarily oppose him, as they did with Rice.