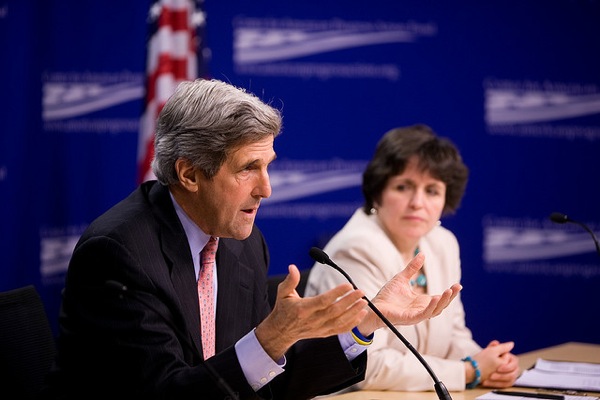 President Barack Obama has selected Senator John Kerry as his next Secretary of State. Above, Senator Kerry in 2009. Credit: Ralph Alswang for Center for American Progress Action Fund/ CC by 2.0

But Obama offered no hints as to whom he will pick for the rest of his national security team, including replacements for Pentagon chief Leon Panetta and former Central Intelligence Agency (CIA) director General David Petraeus (retired), who resigned abruptly last month in the wake of reports of an affair.

The White House reportedly intended to announce its picks for all three posts Friday but backed off, primarily in response to an intense campaign led by prominent neo-conservatives and leaders of the Israel lobby against the possibility of former Nebraska Republican Senator Chuck Hagel as head of the Pentagon.

Hagel, who currently serves as co-chair of the president’s Foreign Intelligence Advisory Board, and like Kerry is a decorated Vietnam War veteran, has come under heavy fire for his outspoken criticism of Israeli policies and the influence of the Israel lobby on Capitol Hill.

Kerry, the 2004 Democratic presidential candidate, has served on the Senate Foreign Relations Committee for 27 years and chaired it since 2009.

In that post, he has defended the Obama administration’s policies and has occasionally carried out specific diplomatic missions on the its behalf. Where he has differed from Obama on foreign policy, he has done so privately.

In his new role, he is expected to be very much a “team player” who will faithfully carry out orders from the White House where national security adviser Tom Donilon and his deputy, Denis McDonough, are likely to continue dominating policy-making in Obama’s second term.

His nomination has been a foregone conclusion here since United Nations Ambassador Susan Rice took herself out of consideration earlier this month after Republicans accused her of misleading the public about the circumstances surrounding the attacks on the American embassy in Benghazi, in which Washington’s ambassador to Libya, Chris Stevens, and three other embassy officers were killed.

Rice and Kerry were reportedly the only two people being considered to succeed Clinton, whose tenure was marked by seemingly unrelenting overseas travel and a strong – if very low-profile – emphasis on building transnational partnerships on global issues, notably women’s empowerment, climate change, education, health and engagement with civil society.

Clinton is also credited with restoring the State Department’s status, in part by prioritising “smart power” over the “hard power” favoured by the Bush administration.

Kerry first burst into the public spotlight as an articulate spokesman for Vietnam Veterans Against the War. Unlike most children of patrician families who evaded the military draft in the 1960’s, Kerry enlisted in the Navy and served on so-called “Swift Boats” that patrolled the Mekong Delta in what was then South Vietnam.

He was elected to the Senate in 1984. During the 1990s he worked with Senator John McCain to help establish diplomatic ties with Hanoi, a benchmark formally achieved under the Bill Clinton administration in 1995.

Kerry acted as a loyal supporter of that administration’s foreign policy, supporting Washington’s controversial interventions in Bosnia and Kosovo, albeit with some reservations.

Under the Bush administration, Kerry voted for the resolution that gave the president the authority to invade Iraq, although like Hagel he quickly became a critic of the war. Republicans have criticised this flip but Kerry is still unlikely to encounter serious opposition from Republican senators to his confirmation next month.

His general foreign policy views largely echo Obama’s. “If there is such a thing as a Kerry Doctrine, it is a clear-eyed willingness to pursue engagement and test the intentions of other countries, even present and former enemies or difficult partners on the world stage,” wrote his biographer, Douglas Brinkley, on the foreignpolicy.com website Friday.

“Kerry – patient but quick to see opportunities – has a negotiator’s mindset,” he noted, adding that, in addition to his expertise on Southeast Asia, he has “amassed an encyclopedic knowledge of the Middle East” and “was the first senator to call for President Hosni Mubarak of Egypt to step down”.

In 2009, Kerry travelled to Damascus to meet with Syrian President Bashar Al-Assad, suggesting on his return that Assad was a “reformer” who could be weaned from his alliance with Iran. He has since called for Assad to step down and supported the administration’s measures to achieve that goal.

On Iran, which is likely to hover around the top of the administration’s foreign policy agenda for the next year or longer, Kerry has strongly supported diplomatic engagement, as well as tightening economic sanctions against Tehran as pressure to curb its nuclear programme.

In introducing Kerry at the White House, Obama stressed the senator’s views about U.S. military power. “Having served with valour in Vietnam,” Obama said, “he understands that we have a responsibility to use American power wisely, especially our military power.”

That understanding could be critical with regard to both Syria and Iran in the coming months, but how much more influence Kerry will exert on the administration’s decisions than he has as the Foreign Relations Committee chair is unclear.

Whoever is chosen to head the Pentagon, however, is likely to wield more influence on decisions of war and peace. As a result, Panetta’s succession is considered particularly critical, particularly to neo-conservatives and the Israel lobby.

Hagel, a personal friend of Kerry, hails from the Republican realist tradition of former Presidents Dwight Eisenhower and George H. W. Bush, and could be expected to strongly reinforce opposition to any further U.S. military intervention in the greater Middle East.

As more of a liberal internationalist, on the other hand, Kerry may be somewhat more inclined to use military force to achieve a “greater good”, such as an end to the increasingly bloody civil war in Syria or preventing the proliferation of nuclear weapons.

If Obama decides that nominating Hagel will exact too high a political price, he is likely to turn either to the current deputy defence secretary, Ashton Carter, or the former undersecretary for policy, Michele Flournoy.