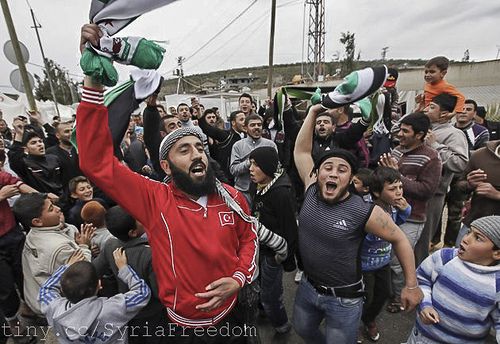 Syrian refugees shout slogans against Assad at Boynuyogun refugee camp in Hatay province on the Turkish-Syrian border in March. Credit: Freedom House/CC BY 2.0

The U.N. estimates that hundreds of thousands of Syrians have fled the fighting in Aleppo, which has witnessed a sharp increase in military tactics by both sides, including the use of helicopters, jets, tanks, and other heavy weaponry. It remains unclear if the rebel offensive was planned to coincide with a similar offensive in Damascus and the recent bombing that claimed the lives of four senior regime officials.

The death toll in this latest round of violence remains unclear, but reports show entire neighbourhoods levelled in skirmishes between the two sides, and a senior regime official warned Saturday that the true “battle for Aleppo” had not yet begun.

Fighting has also broken out in and around the Al-Yarmouk Palestinian refugee camp, where shells likely fired by the regime killed at least 20 Palestinians, and in Al-Abbasyieen, an area in the outskirts of the Syrian capital of Damascus. On Monday morning, Syrian state media claimed that a bomb exploded inside a pro-government TV station in Damascus.

The regime has been further undermined by a series of high-level defections, including Syrian Prime Minister Riad Hijab who fled Sunday night to neighbouring Jordan.

The situation looks grim for the embattled Syrian regime, which is facing dwindling resources and cooling relations with its international supporters in China and Russia, but thus far the army has successfully retaken most areas that have come under its direct offensive.

The Syrian government has appealed to Russia for financial relief from crippling international sanctions that may be starting to deprive the regime of much-needed fund and oil to maintain its strained security apparatus.

However, as the battle for Aleppo drags on and sporadic fighting continues in Damascus and elsewhere across the country, it is unclear if the limited remaining resources of the Syrian army will be able to continue to fund the embattled security apparatus.

Reports have emerged that northeastern Syria has increasingly come under the control of Kurdish forces under the auspices of a newly-formed Supreme Kurdish Council. Abdelbaset Sieda, the new president of the Syrian National Council after Burhan Ghalyoun’s resignation several months ago, has issued a statement arguing for a negotiated solution to sovereignty in the Kurdish areas, while maintaining a policy of zero tolerance for compromise with regime officials who have “blood on their hands”.

There have also been significant changes in international responses to the uprising, including a Treasury Department waiver to allow U.S. groups to fund the opposition, and the recent revelation that President Barack Obama has secretly authorised the arming and training of Syrian rebels in neighbouring Turkey.

The spiralling violence has led to some international concern that the conflict could rapidly become far worse. The government recently relocated several of its chemical and biological weapons stockpiles, and though the Syrian foreign ministry promised that no weapons of mass destruction would ever be used on Syrian civilians, it did reserve the right to use them against “foreign enemies”, a distinction that has become increasingly blurry as the Syrian opposition develops closer ties to international players in the U.S. and the Gulf.

Some concern has also been directed toward the Free Syrian Army (FSA) itself. While still structurally outmatched by pro-regime forces, it has significantly bolstered its military capability in recent weeks. In addition to worries about sectarian language from some FSA fighters, human rights organisations have begun to condemn potential war crimes committed by the FSA, including kidnappings, summary executions, and bombing attacks on civilian areas.

The window for an internationally-mediated ceasefire and transitional peace plan appears to be closing, as Special Envoy Kofi Annan announced his plan to resign from his post at the end of his current mandate on Aug. 31. Though the U.N. is scrambling to find a suitable replacement, the U.N. mission in Syria and Annan’s six-point peace plan appear to be nearing their end, leaving few diplomatic options left on the table.

Many inside of Syria have begun to worry that a prolonged civil war is now all but inevitable. As the military battles increase, the incidence of peaceful, mass-based demonstrations have effectively vanished. It is unclear, however, to what extent the dwindling numbers are a result of fear of regime reprisal, or a lack of faith in the militarised Syrian opposition movement.

Despite the string of FSA victories, the Syrian opposition remains deeply divided and struggles over leadership and direction continue to plague coordination efforts. A conference planned by Haytham Al-Maleh, a prominent opposition figure who recently broke with the well-known Syrian National Council, is being boycotted by several opposition groups, including the SNC.

A number of analysts in the U.S. have roundly rejected both the Syrian government and the Syrian opposition, including As’ad Abu-Khalil, a professor at California State University Stanislaus and the proprietor of the popular Angry Arab News Service.

Abu-Khalil warns in his blog that “the Free Syrian Army took over and hijacked the uprising. Most activists stayed home and washed their hands of what was going on, and some still supported the FSA even if they did not join.” He claims that there is now “no civilian movement left: it was killed by the regime and the FSA.”

Abu-Khalil also warns of the increasing influence of Al-Qaeda and other fundamentalist Islamist groups operating under the guise of the FSA, which still lacks strong central coordination and leadership. Websites affiliated with Al-Qaeda groups have taken responsibility for a number of bombings and attacks in Syria, and analysts have warned that many pro-Al-Qaeda fighters have left Iraq to join the ranks of the Free Syrian Army.

As the Assad regime’s legitimacy – and institutional capability – plummet to new lows, there is little indication that the opposition movements have built the necessary public support to effectively replace it in the event of a total government collapse. U.S. and Israeli plans for post-conflict reconciliation have been roundly rejected by key opposition figures, but no credible alternative has been offered in their place; Syria’s future is apparently as unpredictable and dangerous as its present.