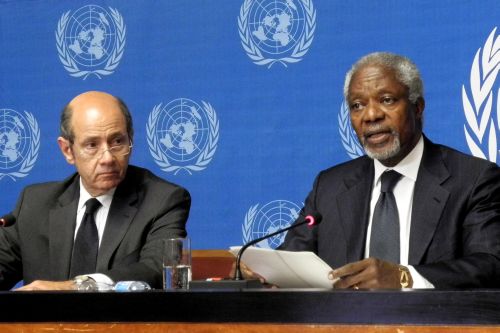 Kofi Annan (right), Joint Special Envoy of the United Nations and the League of Arab States for Syria, speaks at a press conference in Geneva Aug. 2. Annan announced that he would not continue in his role beyond the end of this month. Credit: UN Photo/Yann Castanier

Asked whether a still-to-be-named new mediator will succeed where he failed, Annan shot back: “Let me say that the world is full of crazy people like me, so don’t be surprised if someone else decides to take it on.”

“I am sure,” he told reporters Thursday, Secretary-General Ban Ki-moon “will find somebody who could perhaps even do a better job than I have done.”

These crises are never static, he said, pointing out that it is a dynamic situation.

And as the situation evolves, there may be other plans, other approaches that may work quite effectively, he added.

Jose Luis Diaz, Amnesty International’s head of office and representative at the United Nations, said Annan’s resignation again points up the failure of the U.N. Security Council (UNSC) to act in a united and decisive way to help put a stop to the violence in Syria.

“UNSC members have seemingly been guided more by political and strategic considerations than by the need to protect the human rights of the Syrian people,” he said.

Annan, a national of Ghana and a former U.N. secretary-general, was the Joint Special Envoy of both the United Nations and the League of Arab States.

But his “mission impossible”, as he dubbed it, was undermined both by the Security Council (where Russia and China exercised double vetoes three times) and the Western powers (along with Qatar, Saudi Arabia and Turkey) which continued to arm the rebels, making the situation militarily volatile.

At the same time, the beleaguered government of President Bashar al-Assad, which reluctantly accepted Annan’s six-point plan, kept reneging on its promises to seek a political solution to the uprising.

Addressing reporters in Geneva Thursday, Annan said the increasing militarisation on the ground and the clear lack of unity in the Security Council have fundamentally changed the circumstances for the effective exercise of his role as joint special envoy.

“Yet the bloodshed continues, most of all because of the Syrian government’s intransigence, and continuing refusal to implement the six-point plan, and also because of the escalating military campaign of the opposition – all of which is compounded by the disunity of the international community,” he complained.

The plan, according to the United Nations, calls for an end to violence, access for humanitarian agencies to provide relief to those in need, the release of detainees, the start of inclusive political dialogue, and unrestricted access to the country for the international media.

Annan said he intends to step down as soon as his mandate expires Aug. 31.

Asked whether the six-point plan will continue without him, Annan said, “First of all, the plan, even though many people dub it the Annan plan, it is the Security Council’s plan.

Responding to Annan’s resignation, both the secretary-general and the president of the General Assembly Nassir Abdulaziz Al-Nasser praised Annan’s efforts and regretted his decision to quit.

Ban said that Annan “deserves our profound admiration for the selfless way in which he has put his formidable skills and prestige to this most difficult and potentially thankless of assignments”.

He worked within the mandate provided to him by the General Assembly and with the cooperation of various member states.

“We have worked closely together these past months, and I am indebted to him and his team for all they have tried to achieve. I will continue to draw on his wisdom and counsel, and on the work of the Office of the Joint Special Envoy,” said Ban.

As his next step, Ban said he will be consulting with his counterpart at the League of Arab States, in order to promptly appoint a successor who can carry on with “this crucial peacemaking effort”.

“I remain convinced that yet more bloodshed is not the answer; each day of it will only make the solution more difficult while bringing deeper suffering to the country and greater peril to the region,” he said.

In a statement released Thursday, Al-Nasser expressed his regrets at Annan’s resignation.

He said he would like to commend the relentless efforts that the Joint Special Envoy has undertaken in the past five months to fulfill the mandate provided to him by the U.N. General Assembly.

Regrettably, Al-Nasser said reports of atrocities and human rights violations that amount to crimes against humanity committed by the Syrian government against their own people are occurring on daily basis.

According to the United Nations, more than 10,000 people, mostly civilians, have been killed in Syria since the uprising began some 17 months ago.

And over recent days, there have been reports of an escalation in violence in many towns and villages, as well as in the countrys two biggest cities, Damascus and Aleppo.