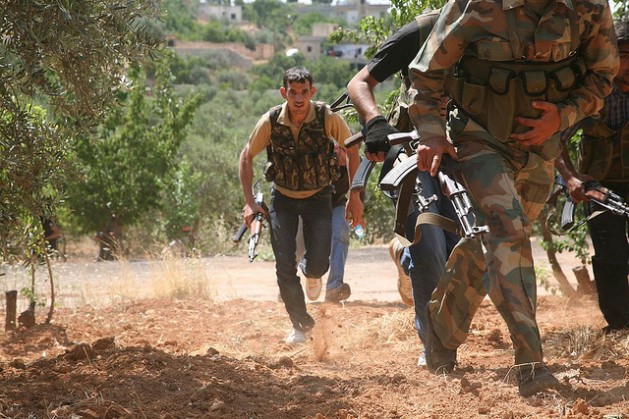 Syrian rebels from the “Al-Qasas Brigade” or “Justice Brigade” run through an olive grove to avoid Syrian Army snipers as they travel between villages on foot in the northwestern Jabal al-Zawiya area. Credit: Freedom House/cc by 2.0

WASHINGTON, Nov 13 2012 (IPS) - As Syrian rebels launched a new attack in Damascus, opposition leaders announced the creation of the National Coalition of Syrian Revolutionary and Opposition Forces, an umbrella group designed to be more representative of – and more influential with – anti-Assad forces on the ground.

Some view the development with cautious approval. Leila Hilal, director of the Middle East Task Force at the New America Foundation, told IPS, “The Coalition is substantively different in several meaningful ways. A main concern, however, lies in how it may be used to advance the proxy agendas at play in the country.”

Components of the Free Syrian Army escalated attacks on the Syrian capital in the past few days, shelling one of Damascus’s two main presidential palaces and assassinating family members of senior regime officials.

A recent offensive along the border has also led to the rebel capture of Ras al-Ain, a small town in the northeast province of Hasaka, which caused up to 8,000 Syrians to flee into Turkey.

The Syrian army, in response, has bombed rebel positions by air, and laid siege to opposition-controlled areas. Reports indicate heavy fighting in Damascus, as well as the eastern town of Al-Qurriya.

In an interview last week with Russia Today, President Bashar Al-Assad claimed to have no intention to back down or compromise. “I am Syrian, I am made in Syria, and I will live and die in Syria,” he told the interviewer.

The fighting has also deeply impacted the internal situation in Lebanon, and spread to Palestinian factions inside Syria. Rebels armed a brigade of Palestinians to battle the regime-friendly Popular Front for the Liberation of Palestine – General Command (PFLP-GC), killing at least 10 Palestinians in and around the Yarmouk refugee camp in Damascus.

Fighting also broke out last weekend along the border with the occupied Golan Heights, where Israeli forces attacked Syrian artillery positions in retaliation for a mortar round that fell near an Israeli army post.

Joshua Landis, an associate professor at the University of Oklahoma and author of the blog Syria Comment, warns that the Syrian spill-over may be even worse in Iraq.

“The Sunni-led attempt to depose Assad’s regime is sure to give a big boost to Al-Qaida in Iraq as arms and men flow across the border and find a refuge in Syria,” he warns. “Saudi, Turkish and Qatari support for Syria’s Sunnis is also likely to turbo-charge passions in Iraq.”

Amidst the escalating violence, Western powers grew disillusioned with the Syrian National Council (SNC) as an effective leadership organisation for the Syrian opposition. After over a year of infighting, high-level defections, and a failure to implement its policies on the ground, U.S. Secretary of State Hillary Clinton called for the creation of a new, more representative opposition body.

After initially supporting the SNC as the “only legitimate representative of the Syrian people,” policymakers in Washington became concerned about its ability to manage a transition to a post-Assad Syria, and the strength of the pro-Western elements in its ranks.

Subsequent attempts by the U.S. to exercise greater oversight and control by coordinating with the opposition in Turkey revealed a chaotic military structure, and deep infiltration right-wing Islamist elements.

Clinton’s call for a new structure demonstrated the administration’s doubts that the current leadership would be unable to produce an outcome in Syria suitable to U.S. interests.

Despite Washington’s best efforts, the meeting of opposition groups appeared to fall apart on Wednesday, when prominent dissident Raid Saif pulled out of the coalition talks after losing his seat on the SNC executive council.

On Friday, SNC President Andulbaset Sieda was replaced by George Sabra, a left-leaning secular activist. Though he originally fell one vote short of being elected to the secretariat, Sabra was invited to take a seat belonging to a hard-line Islamist bloc called the Higher Council for the Syrian Revolution.

On Sunday, however, opposition groups tentatively agreed to a new leadership structure. Sheikh Ahmad Moaz al-Khatib was chosen as the new president, replacing Sabra as the titular head of the opposition after only two days. Riad Saif was also reincorporated as the new vice president, and the Lebanese newspaper As-Safir claims that Qatar successfully pressured the SNC into the coalition by threatening to cut off its funding.

The new organisation was immediately recognised by the Gulf Cooperation Council. The U.S. Department of State issued a statement on Sunday promising to “work with the National Coalition to ensure that our humanitarian and non-lethal assistance serves the needs of the Syrian people”.

Despite the administration’s focus on the political dimension of the conflict, other prominent government figures and analysts continue to push for more direct military intervention.

David Schenker, a fellow at the Washington Institute for Near East Policy, recommended that Washington “take the lead in vetting and providing units of the Free Syrian Army with the weapons required to more quickly end the war.”

General Mustafa al-Sheikh, one of the leaders of the Free Syrian Army, has similarly warned that “If there’s no quick decision to support us, we will all turn into terrorists.”

However, the New America Foundation’s Hilal has warned that increased foreign involvement may be counterproductive.

“The challenge now will be to avoid letting external agendas interfere with what is good for Syria,” she told IPS. “A sudden infusion of foreign assistance and weapons could prove more harmful than helpful, including potentially undermining the nascent unity.”

Meanwhile, Lakhdar Brahimi, the current international envoy for Syria, warned that the violence in Syria may produce a failed state. “What I am afraid of is…the collapse of the state and that Syria turns into a new Somalia,” said Brahimi in an interview with the London-based al-Hayat newspaper. Brahimi’s attempt at a ceasefire collapsed in late October.

“I believe that if this issue is not dealt with correctly, the danger is ‘Somalisation’ and not partition: the collapse of the state and the emergence of warlords, militias and fighting groups.”