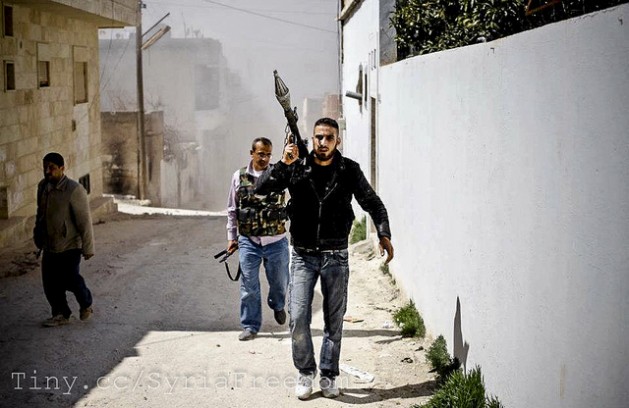 Tensions between the civilian and military opposition to Assad’s rule has simmered since the conflict took a decidedly militaristic turn last year. Credit: Freedom House/cc by 2.0

WASHINGTON, Dec 14 2012 (IPS) - This week, the United States officially recognised the newly-formed National Coalition for Opposition and Revolutionary Forces as the legitimate representatives of the Syrian people, culminating a two-year process of legitimising the Syrian opposition with the U.S. government.

However, as rebels advance ever-closer to the regime’s remaining centres of power, Washington may soon be forced to make more controversial decisions that influence its relations with the Syrian state – and possibly the entire region – for decades to come.

“Those who wish to influence and shape (the outcome of the conflict) must get into the arena,” said Ambassador Frederic C. Hof, senior fellow for the Rafik Hariri Center for the Middle East at the Atlantic Council, at a roundtable discussion on Syria Wednesday.

Hof warned that, “Whether the regime goes voluntarily or at the point of the gun, one thing is clear. Those who fought the regime with arms will have much to say” in determining Syria’s future, “even if a civilian government comes to power.”

But further militarising an already explosive situation may have long-term consequences beyond the current battle between opposition forces and the Syrian regime.

At a panel discussion at the New America Foundation on Tuesday, Mohammed A. Ghanem, senior policy advisor for the Syrian American Council, spoke about the development on independent civil society in “liberated” regions in northern Syria.

“Citizens are coming together trying to fill the gap left by the contracting state,” said Ghanem, describing the proliferation of local city councils and proto-government groups that have formed in the wake of the regime’s departure.

But such civil society groups can only exist in the shadow of the armed rebel forces that have driven out existing institutions. “Of course if it were not for the military efforts in the city, there would be no liberated areas,” says Ghanem. “Everyone depends on the (Free Syrian Army) to provide protection and keep the regime from entering the city.”

“However,” he warns, “there is also a competitive aspect…about who will have the upper hand in the city. Both the military council and the civilians are severely underfunded, but the main source of power for the military is in fighters and arms, whereas civilians need to be empowered to provide more and more services so their legitimacy will be bolstered.”

Very little international attention or money has been given to these grassroots efforts; most of the money funneled into the country has been devoted to maintaining the salaries and supplies of rebel groups.

The tension between the civilian and military opposition to Assad’s rule, long simmering since the conflict took a decidedly militaristic turn last year, raises problems for Washington’s attempts to influence a post-Assad transitional order.

The Obama administration has largely avoided direct influence in the fighting on the ground. Instead, it has sought to facilitate the transfer of arms and intelligence to “friendly” armed groups in Syria.

“Although Washington has quietly endorsed the new regional Sunni politics, U.S. policymakers and intelligence and policy analysts should consider the possibility that in the long run, the new order could also spell trouble for Arab democratic transitions and for the West,” wrote Emile Nakhleh, the former director of the Political Islam Strategic Analysis Programme at the U.S. Central Intelligence Agency (CIA).

The administration quickly found that far-right Islamists and Al-Qaeda sympathisers were among the best-armed and well-financed armed groups, and that U.S. equivocation has engendered animosity from both the regime and the opposition.

Many have argued that the absence of pro-U.S. sentiment in Syria necessitates a more direct involvement. Ghanem stated that “engaging the situation, being proactive about what’s happening, and doing it before it’s too late…will determine the relationship they have (with Syria) in the future.”

He dismissed concerns that direct support might empower the wrong individuals. “This argument of ‘we don’t know the bad guys and the good guys’, I don’t buy that. They know who’s good and who’s bad. What they need to do is to engage the situation more proactively.”

Similarly, at the Atlantic Council roundtable, Ambassador Hof cautioned that “to be credible with Syrians…the United States will have to become directly involved in arming units now affiliated with the new opposition Supreme Military Council,” referring to the Free Syrian Army’s new military coordination body.

However, given its diminished regional standing, any overture of support (or condemnation) from Washington may well have the opposite of its intended effect.

Activists have accused Washington of “putting the opposition in a very embarrassing position” by listing the Al-Qaeda-affiliated Nusra Front as a foreign terrorist organisation earlier this week. Some have argued that Nusra’s portrayal as an enemy of Western interests in Syria has bolstered its legitimacy, not undermined it.

Others, including Sheikh Moaz Al-Khatib, head of the National Coalition, and Riyadh Al-Asad, commander of the Free Syrian Army, have defended the Nusra Front as “integral to the fight”, and its militants among “the best and the bravest” of the Syrian opposition.

Given these limitations, the administration has been happy to project an image of staying on the sidelines, but even if the regime falls – a process that could take days or months – calls for international intervention are unlikely to subside.

Hof argues that “an international stabilisation military force” will be necessary to “return refugees and …restore vital services as quickly as possible”, referencing the growing humanitarian disaster for displaced individuals in Syria and refugees abroad.

While the war grinds on, hundreds of thousands of Syrian refugees are bracing for the coming winter. Though most did not expect to remain outside their country long enough to consider the coming weather, it appears that few are expecting to return home any time soon.