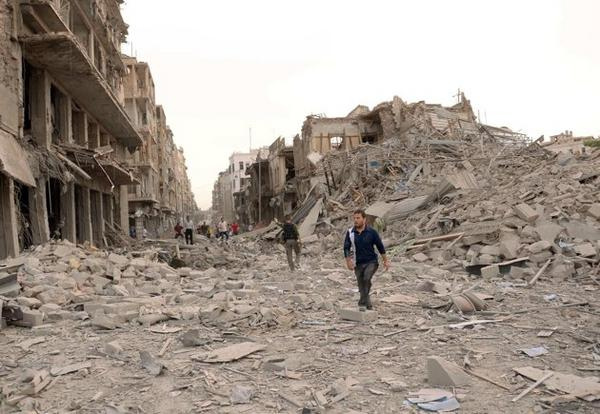 The escalating warfare in the past week alone has involved aerial bombardments, car-bombings, and a government shut-off of national internet service. Credit: Rami Alhames/cc by 2.0

WASHINGTON, Dec 4 2012 (IPS) - As Syria descends further into civil war, the Barack Obama administration has struggled to balance its support for anti-Assad groups with its concerns that the opposition leadership – including the newly-formed umbrella coalition – is controlled by hardline Islamist groups.

Washington’s support for the rebels has become increasingly tenuous as the escalating violence has led to worrying developments from both sides. Noting “increased concern” of potential chemical weapons deployment, President Obama warned this week that the use of WMDs by the Syrian government would be “totally unacceptable”.

Washington has been reluctant to get too directly involved in the conflict, despite appeals from pro-war organisations, Syrian rebels, and other Western states. U.S. officials have enacted rigorous sanctions and diplomatic pressure on the Syrian government, and have furnished the rebels with “non-lethal” material support, but have been unwilling to commit U.S. troops or weapons.

However, NATO officials announced earlier today that Patriot Missiles have been approved for deployment on the Turkish border, bringing the U.S. and its European allies closer to direct conflict than ever before.

Joshua Landis, associate professor at the University of Oklahoma and proprietor of the widely-read blog Syria Comment, does not expect the NATO arms shipment to lead to a direct confrontation with Syria.

“The Patriot missiles have been in the works for months, when the situation on the ground was quite different,” Landis told IPS. “Things are moving fairly quickly in Syria, and the rebels have made a lot of advances…and events on the ground have overtaken the initial issues.”

Phyllis Bennis, a Mideast expert at the Institute for Policy Studies, largely agrees. “There is a danger, although still small, that the Obama administration will look at the escalating European support for the newly configured – though largely unchanged – rebel alliance, and decide that it is more risky to remain outside,” Bennis told IPS.

The National Coalition for Syrian Revolutionary and Opposition Forces, the umbrella group created after U.S. and its Gulf allies grew disillusioned with the existing opposition organisations, closed out a three-day conference in Cairo last week. Though the coalition made little progress in determining the make-up of its 11-member executive political assembly, the Muslim Brotherhood appears to wield increasing control in coalition proceedings.

Attendees claim that members of the Brotherhood have overwhelming control in the determination of the final leadership body, as well as the drafting of the organisation’s internal constitution.

Riad Hijab, who served as the Baathist prime minister in Syria until his defection earlier this year, currently serves as the liaison between the coalition and the rebels on the ground. With the fragmentation of the armed movements inside Syria, the coalition will have to find a means to reunite right-wing Islamists in northern Syria, armed tribal elements in the East, and Kurdish militias in the northwest, none of which have expressed a willingness to fall in line under the leadership of the coalition.

Days after the formation of the coalition, rebel groups in Aleppo rejected the organisation’s leadership, denounced the coalition’s “conspiratorial” attempt to seize power, and declared their intent to establish an Islamic state in Syria, rather than the purportedly secular plan of the coalition.

Though Syrian rebels have made striking gains in the past few weeks, launching an offensive in the capital just this week, profiles of opposition figures and Syrian regime arrests show an increasing internationalisation of the opposition. Some rebels have recently acknowledged the growing influence of Jabhat Al-Nusra, an Al-Qaeda affiliate which claims to have up to 10,000 fighters in Syria.

It is near-impossible to determine the influence of such groups on the overall opposition, but many are concerned that the protracted conflict has empowered the wrong actors to properly manage a post-Assad transition.

Bennis cautions that, “It appears that the vast majority of the weapons flooding the conflict by outside forces are being used by partisans of the first few battles, far less by those concerned with Syrians themselves.”

Friends of Syria plan for the future

Late last week, delegates from dozens of states gathered in Tokyo for the fifth meeting of the “Friends of Syria” group convened by Secretary of State Hillary Clinton. Though Clinton promised that the U.S. would “do more in the weeks ahead” to aid the Syrian opposition, the Obama administration’s path forward remains unclear.

The United Kingdom, France, Turkey, and most Gulf states have already recognised the new coalition as the legitimate representatives of the Syrian people. U.S. Ambassador to Syria Robert Ford said on Thursday that he “strongly, strongly, strongly” supports the efforts of the coalition, but Washington has yet to extend any official recognition to the body, though it has maintained strong networks of support and assistance to the group.

“The U.S. has made clear that it has no intention of stopping its regional allies, primarily Qatar, Turkey and the Saudis, from arming the various factions of the Syrian opposition,” said Bennis.

With Washington’s acquiescence, rebels’ weapons and money from the Gulf States have flowed freely into Syria through Turkey, while the regime appears to have secured arms shipments through Iraq.

According to Landis, much of the problem stems from a lack of long-term planning at the start of the uprising: “Back in 2011, everyone was predicting that Assad was going to fall within a couple of months, and everyone miscalculated badly.”

The escalating warfare – which in the past week alone has involved aerial bombardments, car-bombings, and a government shut-off of national internet service – demonstrates an unwillingness of either side to consider the possibility for a negotiated outcome.

Though most of these actions evince a growing confidence and organisation among the rebels, the political effect remains largely the same.

“Developments in Syria these last couple of weeks have escalated militarily, with the opposition forces showing greater capacity,” said Bennis. “But politically, little has changed.”