CAIRO, May 26 2012 (IPS) - Candidates competing in Egypt’s first presidential election since Hosni Mubarak was ousted are vying for a prestigious position whose job description – oddly enough – has not yet been written. An unresolved dispute over who will write a new constitution for post-Mubarak Egypt has put the country in the unusual position of voting for a president with undefined authority. 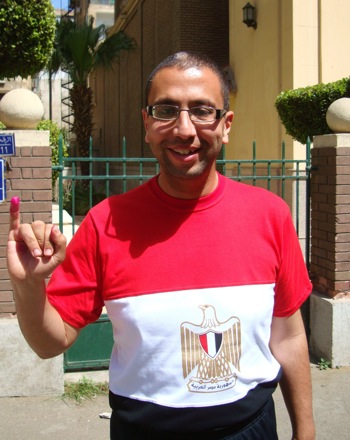 Egyptians are voting for a president with undefined powers. Credit: Cam McGrath/IPS

“We still don’t know what responsibilities and powers the president will have,” says Negad El-Borai, a rights lawyer and democracy activist. “(Rival parties) want to see how the election turns out before deciding on a constitution that will define the president’s role.”

The Supreme Council of the Armed Forces (SCAF) suspended Egypt’s last constitution after Mubarak was toppled during a popular uprising in February 2011. A constitutional declaration passed by a national referendum the following month was intended to serve as a stop-gap measure until a new charter could be written.

The declaration tasked Egypt’s elected parliament with forming a 100-member constituent assembly to draft a new constitution ahead of presidential elections. However, problems arose after the Islamist- dominated parliament stacked the assembly with conservatives, prompting many secular and liberal assembly members to pull out in protest.

In April, an administrative court suspended the constituent assembly on the grounds that the new body was unrepresentative of the public at large.

“The assembly was supposed to represent all segments of society,” explains political science professor Mostafa Kamel El-Sayed, a former assembly member. “Instead it became weighed down with Islamists, who would have dominated the discourse at the exclusion of others.”

In the absence of a new constitution, Egypt’s next president will begin his tenure without any legal document to adequately define his authorities and responsibilities. Commentators warn that the situation could spark a power struggle between the predominantly Islamist parliament and the ruling military council – with each side trying to carve out executive authorities.

“A president without a constitution is like a marriage without a contract,” Mohamed Hassanein Heikal remarked during an interview to Al-Hayat satellite channel.

The veteran journalist argued that Egypt’s elections are pointless and illegitimate without a national charter to specify the president’s powers.

According to legal experts, the March 2011 constitutional declaration grants the SCAF executive authorities – including the right to declare war – until a new constitution is written. The would-be president is entitled to appoint or dismiss cabinet ministers, but does not have the right to ratify state policy or the state budget, or to introduce legislation. Those authorities lie with the parliament.

One of the main sources of contention among legislators is whether authority in Egypt should be centred on the parliament or the president. The last constitution, written in 1971 and amended over the decades, increasingly concentrated power in the presidency.

“Nobody wants another pharaoh,” says 27-year-old Mohamed Mohieddin, who stood against Mubarak’s security forces during last year’s uprising. “We hope that the next constitution will have checks and balances to prevent Egypt from turning into another dictatorship.”

Not surprisingly, Islamists, who hold about 70 percent of the parliament’s seats, favour a parliamentary system in which most authority rests with the legislature, and the role of the president is largely ceremonial. Secular and liberal party leaders – hoping to counterbalance the Islamist influence in politics – have called for a presidential system, albeit with limits to executive power.

Both groups appear to be moving toward a consensus on a semi-presidential system like that of France, where a strong president is balanced by an empowered parliament. One proposal is that the president would be responsible for foreign affairs, while the parliament-appointed prime minister would handle domestic policy.

Another important debate is over the authority and privileges the new constitution will assign to the military, which has resisted calls for civilian oversight. Activists accuse the ruling generals of attempting to interfere in the constitution-writing process or impose binding legislation that would enshrine the privileges the military has enjoyed for over 60 years.

Concerns that the SCAF would find a way to dilute parliamentary powers appear to have motivated the Muslim Brotherhood, the country’s largest and oldest Islamic group, to field its own presidential candidate despite its promise to stay out of the race. The disqualification of their first candidate, prominent leader Khairat El-Shater, on the basis of an earlier political conviction during the Mubarak era, reinforced their suspicions that laws were being interpreted to serve a political end.

Similarly, fears that an Islamist might win the presidency may have prompted the generals to tacitly back the campaign of Ahmed Shafiq. The former air force commander, who served as Mubarak’s last prime minister, experienced an unexpected surge in popularity just days before the polls opened.

Opponents claim the presidential election committee – headed by a former military judge – has ignored allegations of illegal campaign spending and voter registration fraud. It has also overruled court rulings that disqualified Shafiq and other “feloul” (remnants of the old regime) from the presidential race.

Analysts say the showdown between the SCAF and the Muslim Brotherhood could ultimately determine who will write the constitution and what authority Egypt’s next president will wield.

“If Shafiq wins, expect the president to be granted broad powers, including the right to dissolve the parliament,” says El-Borai, the rights lawyer.

The Muslim Brotherhood has also sought leverage. Earlier this month, parliamentary speaker Saad El- Katatni, secretary-general of the group’s political arm, announced that the committee charged with forming the constituent assembly would only resume on May 26, two days after the first presidential poll.

“The Muslim Brotherhood wants to wait and see the result of the presidential election before writing the constitution,” argues El-Borai. “If their candidate wins, they will become the most important political power in Egypt and can negotiate with the SCAF from a position of power.”

Preliminary results from the May 23-24 poll show Muslim Brotherhood candidate Mohamed El-Morsy and presumed SCAF candidate Ahmed Shafiq received the most votes. The two candidates are expected to compete in a highly-polarised run-off next month, with the winner to be announced by Jun. 21.

The SCAF has promised to turn Egypt over to civilian rule by Jul. 1. Yet it could take months to draw up a constitution and put it before a popular referendum. Until then, the elected president could find himself at the centre of a political maelstrom. (END)