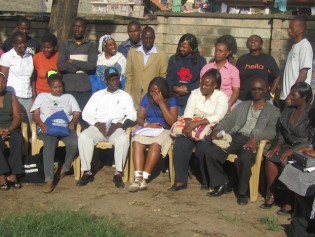 By Miriam Gathigah
With less than two months before Kenyans head to the polls for what is shaping up to be the most competitive and polarised general election in the country’s history, many fear that this East African country of over 40 million has not seen the last of electoral violence.

By Adam Morrow and Khaled Moussa al-Omrani
More than 15 months after Egypt's Tahrir Square uprising and four months after free parliamentary polls, many Egyptians say that daily living conditions are worse now than they were in the Mubarak era.

By Cam McGrath
One is a conservative Islamist attempting to reinvent himself as a pragmatic liberal, the other is a secular statesman trying to distance himself from the authoritarian regime he once served. Both aspire to be Egypt’s first civilian president.

By Mustapha Dumbuya
When the verdict against Liberia’s former President Charles Taylor for war crimes in Sierra Leone is handed down on Thursday, it will be of no help to the many former combatants of the country’s brutal civil war who have not been reintegrated into society. Instead, they will continue to pose a threat to Sierra Leone’s future stability.

By IPS Correspondents
Analysts say that Senegal’s outgoing President Abdoulaye Wade was made to pay for his failure to respond to popular demands, particularly arising from the high cost of basic commodities, a lengthy strike by teachers, and high youth unemployment, by losing his bid for a third term of office.

By Ngala Killian Chimtom
When Cameroon’s President Paul Biya announced that the 50th anniversary of the reunification of French and British Cameroon will take place later this year, it resurrected bitter feelings among Anglophone Cameroonians who say they do not feel like equal partners with their Francophone counterparts.

By Badylon Kawanda Bakiman
While the Congolese are awaiting the official results of the late November presidential elections, three of the eleven candidates have already called for them to be annulled.

By Robyn Leslie
It is a hot and humid morning in the village of Fube in southeastern Democratic Republic of Congo. Dust and smoke from morning fires and low-lying clouds mingle to give the horizon a distinctively fuzzy look.

By Stephen Binda and Robbie Corey-Boulet
Liberians cast their ballots Tuesday in an election that has so far been described as orderly and peaceful, though concerns persist that a disputed result could anger voters and fuel minor unrest.
Next Page »
ADVERTISEMENT ADVERTISEMENT