FUBE, DR Congo, Oct 13 2011 - It is a hot and humid morning in the village of Fube in southeastern Democratic Republic of Congo. Dust and smoke from morning fires and low-lying clouds mingle to give the horizon a distinctively fuzzy look. 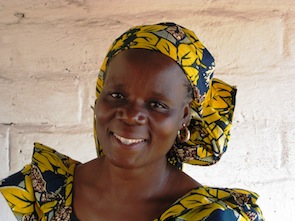 “This is what the name ‘Fube’ means,” Kyomdwa Ntombo says. “It comes from an old French word that means ‘blurred’.”

A unique experiment, Fube is a newly constructed village that was designed and built by refugees who began returning to the DRC after the first democratic elections in 2006 – a follow-on to the cessation of hostilities in 2003.

The DRC was the scene of what has been called Africa’s World War. Neighbouring countries, rebel groups and government forces fought ferociously in a conflict that saw the death of approximately five million people between 1998 and 2003.

This violence resulted in large-scale movements of refugees out of the Central African nation. After fleeing from Katanga, the DRC’s most southerly province, over 50,000 refugees found themselves depending completely on non-governmental organisations in camps in Zambia.

Dressed in a vibrant yellow chitenge, the traditional brightly coloured material wraps worn by women in the DRC, Ntombo sits on a makeshift bench in a clearing. Surrounded by tall trees and the still- smoking stumps of vegetation that has been burned, she explains her flight into Zambia.

Ntombo fled her home in the late 1990s with her two small children. Her husband was away at the time and they had no way of telling him where they had gone. She and her children ended up in a Zambian refugee camp called Mporokoso by its inhabitants, due to its close proximity to the town of the same name.

Ntombo was not alone. In 2004, the United Nations Refugee Agency (UNHCR) figures stated that 66,000 Congolese refugees were being hosted in camps in Zambia.

But it was not home. And finally after 10 years Ntombo and approximately 45,000 refugees began returning to the DRC after the war ended and the new government came to power in 2006. (The country will go to the polls in November for its second general election.)

The international community saw this as a sign that peace had returned to large parts of the country, but this gave hope to more than just international observers. Informally, many repatriated refugees say that the 2006 election meant that continuing rebel “authority” in rural areas could be realistically challenged.

In 2007, conditions in Katanga Province were deemed safe and the UNHCR initiated a voluntary repatriation process for Congolese refugees living in Zambia. It is these repatriation experiences that the small crowd now gathered in Fube village’s clearing want to share.

Some stories are uplifting, like that of Frederick Luimbo, a businessman who runs a small pharmacy in Fub’s trading square. “Home is home. I thought I could bring my skills back home. I wanted to come home.”

Tundwa Kapangu sits quietly reeling off the list of items that were distributed by NGOs. “I received food rations, a kitchen kit, a bicycle, metal sheets for building a roof, a mat and blankets.”

Others remember assistance with farming implements and six month’s free medical care, or school fees for their children. Augustin Lukena Kisuku is the president of the committee that administers Fube, and he explains that assistance received depended on the time you chose to return.

“If you came in 2007, you got no school fee support, but medical assistance. In 2008, bicycles and iron sheets for house roofs were added.”

Others share more sober tales. A young man in his late twenties, Moto Kabobo, is articulate and chooses to relate his story in English, which he learnt while living in Mporokoso camp in Zambia. Smiling ruefully, he explains why he felt reluctant to come home.

“I left DRC in 1998 when I was very young, about 11 years of age, because of the war. I am now afraid that if I go back to my village, they will accuse me of witchcraft because of all the U.N. assistance I have received, while they suffered in DRC during the war and have received nothing. They will say I have used majini – bad spirits – to become rich.”

In this Central African nation people here are accused of witchcraft when they seem to have accrued wealth and status. People say they have used majini – bad spirits in Swahili – to attract success and affluence.

That was why he chose to repatriate to Fube, a purpose-built community of returnees who all, for one reason or another, could not return to their homes and villages.

“Here at least we all have the same assistance as refugees, so there is no jealousy.” But his tone is not hopeful as he starts to explain his fears. “My whole life has been conducted in Zambia. DRC is not a free country. It is a war country – in all the years, there has been war.”

Many of the refugees who shared their stories of repatriation echo the same sentiment: fears about returning to homes where relatives have over-run their plots and houses, or fear of renewed instability. Honore Kalombe Matete explains many people’s feelings. “I chose to come to Fube because when war comes again I can easily make the border.”

Kabwe Makoba is a soft-spoken man who spent nine years in Kawambwa refugee camp in Zambia before repatriating to Fube in 2009. But his story is a strange one.

“Mine was a sudden repatriation,” he says with a big smile. “One day when I returned from my day of business, I saw my name had been placed on the list to be repatriated. I believe a UNHCR field officer or Zambian official put my name there without asking or telling me.”

Father Cyprien Nkoma, a DRC citizen and Catholic priest, relates how repatriation was used as a form of punishment for offences like breaking the rules of your gate pass (allowing refugees limited movement in the local area) or causing trouble in the communities. Starting a fight could land you on the repatriation list – “just another way to ‘squeeze’ people to go home.”

The UNHCR, in conjunction with the Zambian and DRC governments, used two methods to repatriate refugees. Most of the repatriated refugees were transported by car to the Zambian shore of Lake Tanganyika.

From there they took a ship across the lake to Moba Port in the DRC, where they were then transported by truck to various destinations in Katanga Province. In 2008, returns to Moba Port via a two-day overland trip from Zambia began.

Despite these tensions, many remain positive about the impact the returnees have had on the communities in Katanga Province. Passing through the villages that are now home to repatriated refugees, it is clear that years in Zambia have brought another level of development to their homes in the DRC.

Many huts now have solar panels charging up batteries, alongside clucking chickens and curious goats. District officials have reported an increase in what they termed a “sense of civic duty”, describing the upward surge of birth, marriage and death registrations from returnees.

Ntombo still doesn’t know where her husband is, and after fifteen years, has resigned herself to taking care of her family without him. But the hope that pervades these communities is brought to life as she wanders round a nearly completed school building that she will lead as head mistress in 2012. “What is good, is to work for your life,” she says. “And I am free now because I am home.”